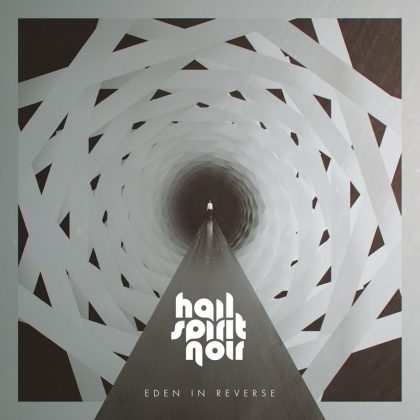 Hail Spirit Noir is already a decade old and is established as one of the best Greek metal bands of all time. With their debut album Pneuma (2012) they managed to combine progressive and psychedelic rock with black metal in their own way. In Oi Magoi (2014) that followed, they crystallized their style and the special characteristics that distinguish them. Mayhem in Blue (2016) was their magnum opus, an almost flawless album. In the years that followed, they played live for the first time and now their line-up is stable. Foivos on drums, Sakis Bandis (Horizon’s End) on keyboards and Cons Marg (Until Rain, Dustynation) on vocals (which were shared between Dimitris Dimitrakopoulos and Theocharis on previous records) have been added to the core of Haris, Theocharis and Dimitris. Eden in Reverse has been released and from the first singles and the artwork it was obvious that it is their bravest album to date.

The magic and truly progressive mood of Hail Spirit Noir

Hail Spirit Noir from Thessaloniki have always managed to pleasantly surprise us. Their impressive maturity in Mayhem in Blue had caused a sensation in the underground and the band had the opportunity to present its music live as a support act to the Norwegian Virus, and also participate in festivals such as the legendary Roadburn in the Netherlands.

Eden in Reverse begins with Darwinian Beasts, an introduction to the album’s atmosphere, and the lyrical concept that deconstructs and reconstructs the Darwinian theory and is centered on evolution and how it is perceived.

Incence Swirls with the wonderful vocal melodies shared between Dimitris Dimitrakopoulos, known for his clear vocals in their previous works, and Cons Marg, is an incredible composition. Besides, the arrival of the second keyboardist had foreshadowed the increased role of keys which now dominate the band’s sound. The mixing of the album, however, leaves room for beautiful guitar and bass themes, as well as Foivos’ imposing drumming. Alien Lip Reading continues in the same style, less impressive at the beginning, but with a nightmarish vocal outburst in the second.

In Crossroads, Lars Nedland (Solefald, Borknagar) is guest on vocals, and the result strongly reminds us of Arcturus, not only because of the keys but also because of Lars’ vocal melodies.

In the cinematic The Devil’s Blind Spot, the mixing of ambient with the eerie screams is exceptional. From this point on, the vocals are clear throughout the album; there are no growls, only a few spooky touches of enjoyable screams.

The First Ape on Earth is the most aggressive composition of the album that reveals the band’s origins, which derive from the highest quality side of Norwegian black metal.

But where is the prog rock element that characterized Hail Spirit Noir? The answer is that it has been significantly reduced and it’s replaced by prog metal. I personally missed it, but the complex experiment of Eden in Reverse contains a wealth of influences and emotions that make it a successful album. The references to Oranssi Pazuzu still exist, however, stripped of the “barbaric” approach of the great Finns.

The band left the album’s top composition for the ending and all these ambient / electronic sounds that are scattered on the album reach their peak in Automata 1980. Here, the influences from Klaus Schulze,Tangerine Dream, Kraftwerk and Jean-Michel Jarre flirt with a metal approach to Goblin in a 10-minute song that may be crucial for the band’s development.

Eden in Reverse raises expectations that are not fully met. If the band decides to perfect its approach, then the result may be a masterpiece. On the other hand, the fact that they have never presented us with an album similar to the previous one complicates things and at the same time reveals the magic of Hail Spirit Noir and their truly progressive mood.

The main question that arose after listening to Mayhem in Blue numerous times was how Hail Spirit Noir would be able to make such an album again. Of course, the answer is simple: by not repeating themselves. Eden in Reverse is a different monster. Many features of the band’s sound are present, but given through a new context. The black metal element is now gone, and both the sound and the production have erased anything reminiscent of the early and mid 70s. Eden in Reverse is clearly a progressive metal album, but different from the typical form of the genre. A retro futurism, which stems from the sound of keys and the production in general, is the basis of the band’s new sound. The vocals sound more distant, while there are elements of late 70s – 80s progressive electronic. The new form created by Hail Spirit Noir seems to be thoroughly crafted, especially in the production. However, for the time being, the compositions do not seem to fully support this change, although they are by no means indifferent. It is, however, the undisputed talent of the band, but also the awesome final track of the album, Automata 1980, which will make us look forward to their next album after the very interesting proposal of Eden in Reverse.