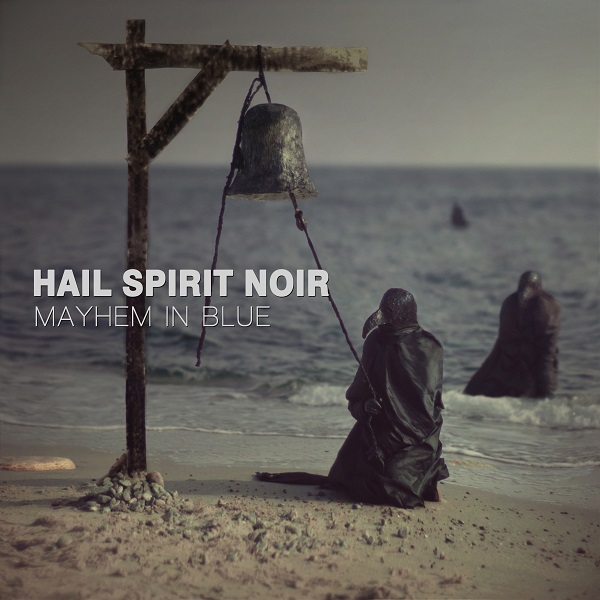 After their first two full-length albums, Hail Spirit Noir put themselves into a rare category of bands, the style of which does not clearly belong to any specific genre. Even if Pneuma (2012) can more or less be considered as black metal, Oi Magoi (2014) that followed was something quite unique. They themselves use the term psych-prog black metal which certainly describes their music pretty well. However, their similarities with bands of similar direction (e.g. Oranssi Pazuzu) are rather few. The factors that make them special are centered on the strong personality of their music and their particular songwriting, as well as their mastery in highlighting their influences from the 60s/70s . Mayhem In Blue signals their return under a record company that believes in them very much.

The combination of black metal with progressive / psychedelic elements and avant-garde touches never seemed as an easy task. However, Hail Spirit Noir are here to prove once again that this musical hybrid suits them, creating an undeniably pleasant outcome. I think that Hail Spirit Noir have simply found their unique sound, combining both the aggression that characterizes dark and black metal music and the progressiveness which is a trademark of the band.

Mayhem in Blue is not an album about mayhem, apparently. It’s more of a trip to “dark” landscapes, blended with ingenuity and complexity as far as its sound is concerned. They wanted to produce an aggressive album and these weird mixtures result in something which, without exaggeration, can be described as an album-beyond-expectations, that marks the history of the band. The basic instrumentation is 70’s-like with quality production, blowing up in the roughness of Norwegian 90’s black metal music. Guitar sounds are not so extreme, but its main grooving riffs are more than memorable. This album totally affects the mood of the listener, as every song has its own identity, transporting everyone to darker, though dreamy places, with an ambience of horror. So, every song should be taken into consideration and judged individually.

The album starts with I Mean You Harm a catchy hellish song that explodes with frenzied drumming, accompanied by dynamic nasty-sounding vocals. The title song sounds adventurous as it will keep the adrenaline flowing and the same time the plodding keyboards along with the bass create a nostalgic feeling. Several elements like riffing and screaming vocals in Riders in Utopia definitely spread out the well-known black aura, as well as lines of psychedelia.

Lost in Satan’s Charms ebbs and flows between eerie ambient passages and black metal rawness with an excellent and balanced progressive play by its side. The latter concludes with a barrel organ sound (it starts as well) and surf sounding guitar, presenting the most ‘complete’ song of the album. The Cannibal Tribe Came from the Sea is a slow paced song inundated with dark melodies in a more abstract space environment. The keyboards serve as a key ingredient and along with the guitar solo and ritualistic rhythms elevate my favorite song of the album. The closing How to Fly in Blackness contains a giallo-based (Argento-inspired) melody accompanied with melancholic vocals where every horror movies fan’s facial expression would indicate only pleasure into this compelling cinematic travel.

To conclude, we deal with an intellectually and artistically mature band which sounds solid, impressing once again with their sound, their remarkable progressive experimentation and psychedelic atmosphere, even though when the album finishes you are left with the feeling that one more song is missing. Hail Spirit Noir achieve an impressive musical imagery with unique musicianship. Their signature is totally upleveled and we hope their music will interest us in the future as well. I would certainly enjoy seeing Hail Spirit Noir as a support band in the upcoming live concert with Oranssi Pazuzu, for obvious reasons.

Mayhem in Blue is the logical continuation of Oi Magoi. Compositional-wise the two releases are almost just as good and also pretty similar since Hail Spirit Noir seem to have crystallized, more or less, their musical direction. Nevertheless, they have mastered the art of stripping down their sound, eliminating anything superfluous, which results in a superb flow that the listener enjoys effortlessly. Their style emanates an organic rock feeling, whereas the more extreme parts are absolutely convincing. The darkness that the songs emit, springs from the compositions themselves, not by cheap tricks. The clean vocal melodies are meticulously taken care of, while the brutal vocals are vastly improved which now sound totally impressive. Mayhem in Blue is one of the best metal releases you are about to listen to this year, which is not exactly metal. Or is it?