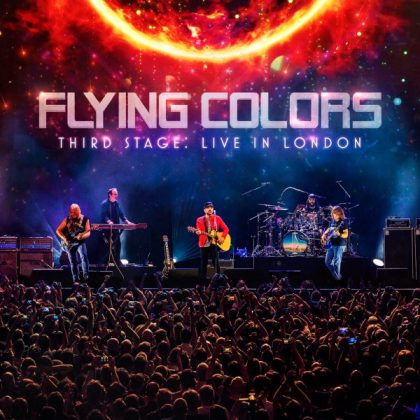 Supergroup Flying Colors announced the release of their brand new live album, Third Stage: Live in London, due on 18th September via Music Theories Recordings. The official live video for the album first single Mask Machine can be seen below.

This is the third live album by the band with Steve Morse, Mike Portnoy, Neal Morse, Dave LaRue and Casey McPherson. It was recorded in London’s Shepherd’s Bush Empire on December 14, 2019, on a short and highly anticipated tour, directly after the release of their studio album Third Degree. The album will be released on several formats, including orange transparent 3LP, Blu-ray, digitally, 2CD/DVD and a 40-page Earbook which includes 5 discs; 2CD album, 2DVDs and a Blu-ray. The Blu-ray and DVDs in the Earbook also include bonus material of music videos and concert footage of their Morsefest 2019 performance in Cross Plains, Tennessee.