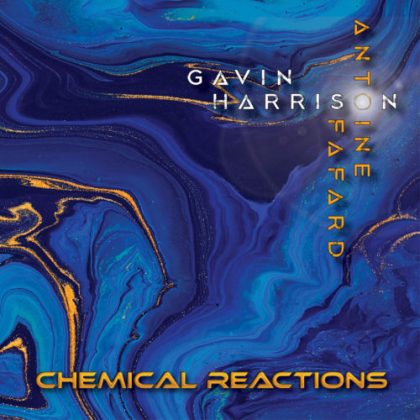 Chemical Reactions is definitely one of the most anticipated collaborations of the year. On the one hand we have the Canadian bassist Antoine Fafard, with a very important 20-year career in the field of jazz-fusion, with Spaced Out in his first steps and later as a solo artist. For those who are not familiar with his discography, 2016’s Sphère seems like a good start. On the other hand, Gavin Harrison does not need any recommendations, as he is rightly considered one of the best drummers of his generation. After Porcupine Tree went on hiatus, he’s been very active. He participates in many projects and bands, among which of course his participation in the new line-up of King Crimson.

Chemical reaction of a perfect duo

If we have to describe Chemical Reactions in one word, then the word fusion is suitable. It is clear that its two main pillars aimed to create a symphonic jazz-rock record or in other words: jazz-prog chamber music that in the last two tracks is transferred to a larger hall.

Fafard and Harrison create the impression of the perfect rhythm section. At first glance, it is clear that they have achieved the first and most important goal for an album that bears these names on its cover: they sound more than tight, and create a rhythmic base that makes these 50 minutes flow wonderfully. Although complex, the rhythmic paths they choose are not at all tiring and clearly lead the compositions.

The string quartet that accompanies the two musicians works on this pattern and brings to the sound a strong narrative soundtrack character. Of course, Fafard also contributes a lot with his solos, and Garisson’s very well thought-out use of the vibraphone, adding points to the overall instrumentation. We should mention that the production and the overall sound, as well as the orchestration, give a crystal clear sound sensation to a rather complex album.

Chemical Reactions includes eight compositions with a clear plan and small parts of improvisation. Some great themes develop during the tracks, while at times there is an intense flirtation with avant-garde. The intensity peaks and the way the musicians lead the listener to the compositional outbursts, sound just perfect. The symphonic character is strong and certainly becomes more intense in the last two pieces with the participation of Janáček Philharmonic Orchestra.

What Harrison and Fafard managed to plan and ultimately create is definitely very special and most importantly, very interesting. Of course, the same formula that makes Chemical Reactions a very successful release, is probably the reason why the album is not a masterpiece, but still remains an perfect example of a meeting between different musical worlds.

Antoine fafard and Gavin Harrison join forces and balance the fusion / progressive dynamics with a chamber music aesthetic and its exquisite harmonious extensions. By abolishing the strict definition of the rhythm section, they function more as soloists, not at the expense of the strings that accompany them, but as their compensation. In a perfectly symmetrical partnership, Harrison’s almost melodic and polyrhythmic drumming enhances every aspect, giving space to Fafard, who makes his mark with his basslines. The compositions have a picturesque, almost cinematic and adventurous style with the artistic ability to evoke emotions. Fafard’s ingenuity in writing and orchestrating music in a uniquely modern way has been emphasized in the past, while Harrison proves to be the perfect match with his precision and impeccable technique. It is worth mentioning that the duo is assisted by Jerry Goodman (The Flock, Mahavishnu Orchestra) in Singular Quartz and Janacek Philharmonic Orchestra in Holding Back the Clock and Chemical Reactions, giving triumphant dimensions to this successful record. Undoubtedly, this is the collaboration of the year!