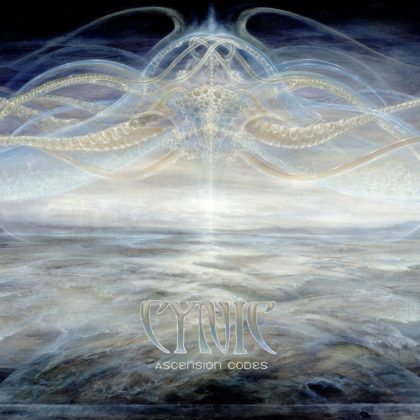 Cynic is one of the most important progressive bands in the history of music even though their releases are not that many. With one album per decade in the last four decades, two outstanding masterpieces, Focus and Traced In Air, and a good album but rather weak compared to their first two (Kindly Bent to Free Us) they have greatly changed today’s progressive metal. The possibility of finding in Florida four underage kids who loved jazz fusion as much as technical death metal in the early 90’s was almost non-existent, but it did happened and the atomic bomb of Focus left a charge that is now found in most of tech death metal bands but also in several progressive metal of today. The loss of the two Seans, these incredible one of a kind musicians, was painful, but Masvidal found the courage to return with new music that not only honors their memory, but is one of the most triumphant moments of recent years.

The shadow of death has been very heavy for Paul Masvidal in recent years, as Masvidal himself has stated through his social media accounts. Sean Reinert, who had been absent from the band for years, was probably the first drummer in history to combine extreme metal with fusion drumming, while the one and only Sean Malone who was almost never absent from the band was one of the most important bassists worldwide. How can one replace two music giants?

Masvidal chose one of the most amazing drummers of his generation, the great Matt Lynch. His work on the album in some parts is from another planet, of course with elements from his late predecessor, but also adding his own powerful musical personality. I really cannot imagine many drummers with such fitting and fantastic performance as his own in this album.

As for Malone? Masvidal’s choice was to simply not replace him. The bass lines are played by Dave Mackay’s bass synthesizer who is also responsible for the keys that have a very strong and central role on this album with sounds that perfectly highlight the compositions. Thus, having another melodic instrument other than electric guitars, we hear very rich music and themes that we had never encountered on Cynic records before. Btw, that bass synth sound is so convincing that if I had not read it I would never have guessed that it’s not electric bass. Besides, the participation of the charismatic Plini on the lead guitars is another great musical source in Ascension Codes.

Losses have fatally marked this record, how could it be otherwise… Masvidal is a man who has always had an inclination for philosophy, Eastern religions and nature, and death has fueled his thought and the material of this work in both the atmosphere and the lyrics. However, the album is not soaked in grief and loss, but takes these events and processes them, giving food for thought and introspection.

But where is the album placed musically? Personally, I got the impression that it’s like a natural continuation of Traced in Air which is also the album of their past that sounds closer, but also keeping some elements from the most rock parts of Kindly Bent to Free Us, while there are always ambient interludes among the main tracks that sound very atmospheric and spacey. The rhythm metal guitars have returned for good after their poor presence on the previous album and the result justifies Masvidal but also those who had complained about the metal element that was missing and always fitted Cynic’s music so much. Along with the guitars, the vocoder, which is their trademark, has also returned.

This is an album that sounds 100% Cynic and at the same time proves that as a composer Masvidal was not afraid to leave his comfort zone. An authentic redefinition of the band, by no means a remake of the band’s previous albums, a work that extends one hand to the past and with the other shows the present and the future. A work that is heard and experienced in its entirety, without any striking weaknesses with a quality that almost never falls below exceptional. An album born through death and mourning that is both a celebration of life and soul, one of the best records of recent years.

The year 2020 was tragic for these Miami based prog metal visionares. With two-thirds of the line-up absent, a comeback album seemed impossible, but Masvidal’s mystical worldview led him to embark on this new journey. On this record he reaches into the past to channel and honor his fallen co-creators. The album sounds ethereal, otherworldly, unique, and incredibly atmospheric. The music is complex and intricate, but all that complexity works to create a darkly chill soundscape. Perhaps the biggest drawback that the album has is the interludes that feel very similar and just take me out of the album’s flow. However and despite that complaint, the compositions still have a certain solidity and hide enough details. I love how the artwork style hasn’t changed, it authentically looks like the old ones. Ascension Codes is a strangely beautiful work that contains a mysterious ethereal energy that attracts you and makes you feel that you just have passed through a stargate, witnessing something beyond standard reality. Great work Paul!