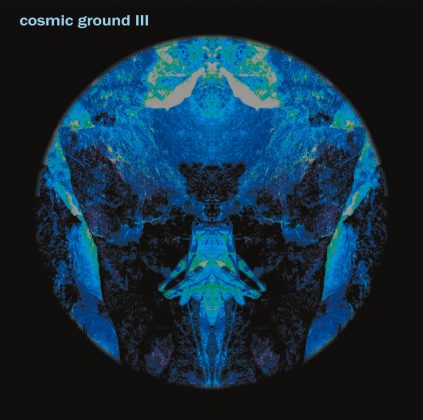 Cosmic Ground is, in essence, the one-man project of Dirk Jan Müller, the keyboard player and leader of the German space / kraut / prog rockers Electric Orange. The first self-titled album was released in 2014 and succeeded in working up into enthusiasm the unsuspected progressive electronic fans with its warm, analogue sound that owes a debt of gratitude to the Berlin School and the work of the great Tangerine Dream, Klaus Schulze, Cluster and Manuel Gottsching (Ash Ra Tempel, Ashra) (οur reviews in Greek here). Just a year later their second record was released, simply entitled 2. To the dark and hypnotic soundscapes that stamped their first album, some motorik rhythms that bring to mind the early Kraftwerk were added, in a very intense record which is nevertheless nowhere near the inspiration (and originality) of its predecessor. This year, without ado, the third album of Cosmic Ground is out and along with Open Worlds of Zanov they are the most worthy representatives of Kosmische Musik.

The enchantment of being unable to shake off your influences

What could a fan of early electronic music, as we were introduced into it at the dawn of the 70’s when it jumped out of the creative cauldron of krautrock, ask for? If we break the basic components down, we’ll see that they are far but complex, yet there lies the rub, since a space and brain journey must be achieved through consoles and keyboards, a journey that will seduce the listener into places they never dreamed of. Dirk Jan Müller had this musical vision when he founded Cosmic Ground and judging by their short, so far, career we can tell that he is doing fine.

Dark feeling and repetitive patterns hypnotize the listener and Klaus Schulze of the Moondance – Mirage era, but also Tangerine Dream of the Phaedra – Stratosfear era, spring to mind. The opener Ground Control is perhaps the most representative and typical, in the good sense of the word, cut of the record. But, in my humble opinion, the otherworldly atmosphere of Crumbling Darkness and Monochrome Ritual steal the show. Here the influence of the experimentation of the legendary Zeit of DT is plain to see, as well as the attempt to recreate the sounds of the planetary electromagnetic waves of our solar system that we have lately heard. Keep Us In Space that rounds off the quartet of compositions is slightly more faithful to the great Berliner School with the ambient background and the dominating repetitive melody.  In general, the whole record honours lavishly the important heritance of the aforementioned legends, but therein lies also its main drawback.

The shadow of the great Edgar Froese and Klaus Schulze falls heavy upon the third work of the Germans and doesn’t contribute to sound genuinely authentic , since the better part of the music seems to ride on their coattails. The absence of the element of surprise, like it was in the debut album, should be stressed and plays an important role. Also, the lengths of the compositions go far beyond their natural life and the lack of interchange between feelings and moods within the songs justifies not its 72-minute duration. Yet, regardless of the flaws, III is at a decent level in a genre that wanes as time goes by. Let us hope that their next work will give the cutting edge that Dirk Jan Müller has proved that he is able to deliver.

There is something genuinely attractive in the third album of Dirk Jan Müller, namely the man behind the keyboards of the eclectic kraut rockers Electric Orange, who performs under the monicker Cosmic Ground. It is this daydreamlike aura that the analog synthesizers and sequencers emanate which played a starring role back in the 70’s to the architecture of the great electronic music from Germany, or more precisely of the Berlin School Electronica. A concise psychedelia of dark shades and its claustrophobic extensions are in pride of place during the 70 minutes this LP lasts, an intergalactic optical atmosphere that is intensified ecstatically all along. Nevertheless, diffidence is spotted in the way of handling the expressive meanings of Cosmic Ground, which in some cases tends to sit on the safe ground of the hitherto achievements and refrains from expanding its concept to other directions. Consequently, we have to do with a sufficiently enjoyable LP that nevertheless falls short of generating collateral thrills…

Klaus Schulze has died at age 74

Wednesday April 27th, 2022 News Comments Off on Klaus Schulze has died at age 74