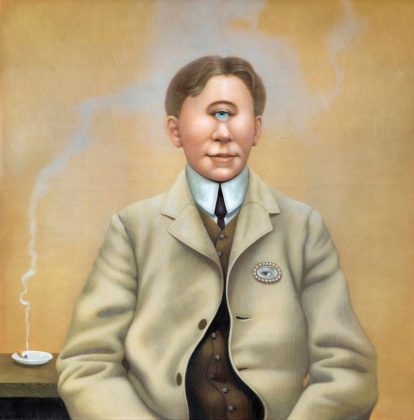 Robert Fripp has captured many of the live performances of King Crimson and especially from the 80s onwards, the quality of audio and visual documents has been excellent. The last until recently period of live shows with the awesome line-up of Fripp / Belew / Gunn / Mastelotto had been fully reflected in a package of recordings and videos, while their choice to play only recent pieces showed an active band that breathed only for the present and future.

Fripp’s choice not to include Belew (who by the way released a very interesting album this year) for the first time since the 80s, except for the new King Crimson line-up certainly disappointed many. The new line-up consists of those five who played in the project A Scarcity of Miracles, i.e. besides Fripp, Jakko Jakszyk in guitar and vocals, Mel Collins on saxophone and flute, Tony Levin on bass and Gavin Harrison on drums, plus the addition of two (!) more drummers, the already known Pat Mastelotto and the hypersessionist Jeremy Stacey.

The 3 CDs by Radical Action (To Unseat The Hold of Monkey Mind) is the result of live performances of King Crimson of today and the first thing to notice is the choice of performing  songs from all periods of the band in a form of a best-of. The question that arises is clear: have King Crimson become the most Jurassic free progressive rock band of the 70s ‘dinosaurs’?

Assuming that Robert Johnson actually acquired his talent after a meeting with the Devil at a crossroad in Mississippi, then a similar meeting of Robert Fripp with Lucifer in a dark alley in London seems not at all unreasonable. The band bears the name of King Crimson totally justifiably, since it brought the dawn of a new genre of rock and most importantly a completely new approach to popular music. This reasoning passed over the years in all incarnations of King Crimson, as in his personal projects.

At the age of 70 he decides for the first time in the history of the British to create a band that connects the past with the present. For the first time we see so many songs from the 70s in the live performances of the band, while the presence of Mel Collins supports this shift. In the same way we can explain the choice of the 70s friendliest voice of Jakko Jakszyk and not that of Adrian Belew. The choice of three drummers on the other hand remains a strange option until the listener hears the album (or if one is more fortunate to see them in a live show). The rhythmic options are not confusing at all, since the presence of three (Stacey anyway plays the mellotron) adds more detail and depth, creating a sense of 3D drumming.

Despite their 70s connotations the band looks as good at the latest material (The Construkction Of Light, Level Five, but also at new songs) which harmoniously coexists  on the first CD with songs from Larks’ Tongues in Aspic demonstrating how ahead of its time this record has been (along with Red of course). In the second CD they choose some very powerful outsiders of their discography like Sailor’s Tale, Pictures Of A City and The Letters, with Jakszyk interpreting them more than brilliantly. His interpretation of the songs from the legendary debut contained in the third CD is flawless, although he cannot touch the mythical interpretations by Greg Lake. An interesting addition is that of the brass in pieces from Red present in the third CD. Initially, this option may sound strange (especially in the homonymous track), but eventually it proves to be successful. The playing and the performance generally touches the absolute perfection and requires no further comment (the Starless video provided to the public is itself the absolute proof). My only complaint is the lack of tracks from the 80s, but without Adrian Belew in the line-up, it may have been the wisest choice.

Robert Fripp in wisdom hath made them all. So is Radical Action… It is his way to sum up much of the career of the British legend. The absoluteness with which he does so and the (almost) non nostalgic approach of past he attempts, leaves no room for the thoughts about the ‘dinosaurs’ mentioned in the preface of this review.

46 years since the legendary debut of King Crimson, Robert Fripp picks Levin, Collins, Jakszyk and three drummers (Rieflin, Harrison, Mastelotto) performing instead of Bill Brufford in a pompous and ambitious concert project and Radical Action to Unseat the Hold of Monkey Mind is the memento. The conquest of Radical Action… is the high-quality audio performance, which KC undoubtedly set as an objective removing even the sound of the audience from their recordings. The huge tracklist includes two new songs (Radical Action, Meltdown), while songs from the 80’s period are completely missing. Oriented more towards the 70’s period and style of the band, it is clear that the futuristic persona of Adrian Belew did not fit in the project (click for those with complaints). The release is addressed to the fans of KC with affection for high-fidelity and to the younger generations, as it can serve as an excellent box set.