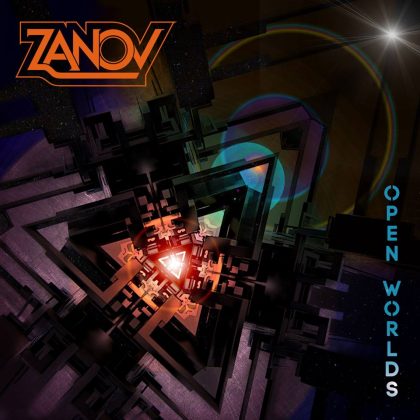 Once upon a time, there was a remarkable scene in the capital city of Germany where a group of pioneering musicians set their mind to pave the way to the future with their experimentations. The whole point is about the Berlin scene and the triad of its most noted representatives: Tangerine Dream, Klaus Schulze and Manuel Göttsching. But aside them and before their legacy permeated to the entire electronic music, there were some, scarce indeed, exceptions of musicians outside Germany that were inspired by the progressive electronic genre. One of the most typical and quality cases was (and still is) Zanov, the personal project of the French synth composer Pierre Salkazanov. Following a seven-year recording activity which began in 1976 with the dark and experimental masterpiece Green Ray, went on in 1977 with the quite different Moebius 256 301 (an obvious pun to the great Dieter Moebius) and came to an end in 1983 with the release of the sublime In Course Of Time. Zanov were re-energized, as a surprise to many, two years ago with the good album Virtual Future. By releasing Open Worlds this year, they mean to consolidate their come-back and convince even the most doubting that their return is a far cry from temporary.

Electronica for the open-minded

The comeback of Pierre Salkazanov in the record industry two years ago with the album Virtual Future was greeted as a statement of artistic existence after two-plus decades since the last, till then, record In Course Of Time (1983). This very first time that we were reconnected – after a prolonged period of absence – in real time with a new brainchild from Salkazanov, or better Zanov (as his artistic nickname is), won’t be also the last, for our own good luck. We are lucky because the delightful artistic view of the composer is about to be verified by Open Worlds, released the current year. The first one with brand new material, since its predecessor was put together by editing and revamping preexisting tunes.

It’s all about an album of cosmic electronic orientation (immortal kosmische musik!) which keeps the interest of the listener unabated, striking a happy medium between abstractness and melodiousness. In nine parts, whose majority does not drag pass the six-minute mark, Zanov attempts, and to a great extend succeeds,  to broaden his style, “playing” simultaneously with the sentimental imprint of his conceptions. This means that his compositions strike some times as a relief, acting as analgesic, and some others they strike as ominous in an attempt to keep the mind “engaged”. As if in an intergalactic wandering, the electro-landscapes through an attractive directness alternate and narrate the imaginary occurrences with varying tension with regard to the rhythm and the melodies. Once you are relaxed with a stable array of sounds before you, out of the blue a different succession of “chords”, bombs and beats emerges, filling idyllically the time and space. You see, the keyboard instruments (mostly the synthesizers Access Virus TI and Arturia Origin) that the aforementioned eletro-composer uses, are an arsenal providing a bunch of analog and digital sounds, which are utilized flexibly to construct his motifs effectively.

Being a medium between the electronic experimentations of the Berlin-school of Tangerine Dream, Klaus Schulze, Manuel Göttsching and the rest iconic figures of the ambient / new age morphology (romanticism lurks in the background) which made its appearance ad nauseam since the mid-seventies in discographies and soundtracks, the wide-spectrum music of Zanov, still pulls off to impress up to this day, maintaining the essence of the past and utilizing it as a benchmark, but never duplicating it. As you segue from one act of Open Worlds to the next, you figure out that the tremendous inventory of the three Zanov’s albums from 1976 to 1983, namely Green Ray, Moebius 256 301, In Course Of Time and it is reinforced by what has been done during these 48 minutes. From the acuity of the opener Electric Dust Fields till the closer Remote Impact, the composer who was born in Paris in 1947 may not pioneer or originate as he did in the 70s and 80s but still creates solid and chock full of art electronic yeast, that brews inside us.

Fifth release and counting from the French electronic progster Zanov, where the recipe still contains the same ingredients as in his long-distant debut, with the 70s feel present in this year’s Open Worlds, yet it is more evident than it was in its predecessor. As expected, the Tangerine Dream and Klaus Schulze influences are in the lead of his musical direction, with the dark element (which was always distinct in the entire French progressive rock) characterizing the record as a whole. Investing mainly in its aesthetics, the listener is about to experience a bunch of unique ambient / space moments (consider Next Trip and Remote Impact). Even though a nagging feeling that the music you hear is deprived of authenticity and originality bubbles every now and then, overall we have to do with one of the best releases of the genre during the last years, a genre that would be overstretched to say that it is going through the motions.