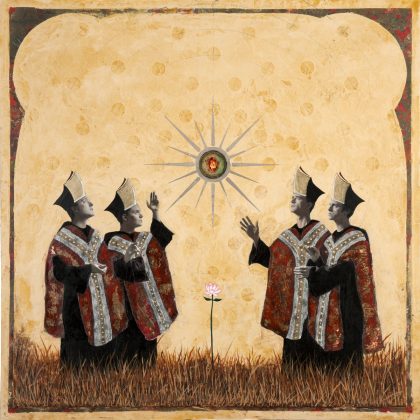 Not Blood Paint were formed in 2008 in Bushwick, Brooklyn of New York by guitarists George Frye and Joe Stratton, bassist Mark Jaynes and drummer Seth Miller. From their first steps, it was made clear that they did not intent to follow beaten or handy tracks. They are motivated purely by art itself and limitations are non-existent, while the theatrical element has been dominant in their music right from the start. La Normalidad (2012) simply signaled the inauguration of the band’s course for the few who listened to it. This years’ Believing is Believing is their second full-length album, a well-prepared premeditated blow, to exclusively unsuspecting receivers.

The Power to Believe

The definition of a grower album is a task that requires careful and meticulous scrutiny. What is it that urges us to read belatedly behind the notes and make us addicted to albums? Believing is Believing is not just a grower. It belongs to the closed group of albums that are apt to jack up the listener from their chair and dilate their eyes, even several listens after the first one. But first things first.

Theoretically the album is above suspicion. Ten independent songs of short duration (from three-and-a-half to six-and-a-half minutes), with no fancy atmosphere, straightforward, simple-structured yet unpredictable, with diminished orchestral parts and generally of low speed. Yet, it is probably this sluggish pace that hypnotizes slyly and also the incredible flaw of the songs, a flaw that hinders initially the proper judgment of each one individually. Of course it’s precisely this belated and escalating evaluation that brings out the majesty of Not Blood Paint’s musical proposition, especially when it is combined with the realization of their aesthetic achievement.

Stylistically, it is no far-fetched to say that Believing is Believing introduces more of a personal style than rehashing hoary old forms. The straightforward rock of Not Blood Paint is a crossbreed mainly between art-rock and crossover / alt-prog (but also pop-rock, post-rock and glam rock) where dynamism and lyricism contradict each other in a mystical, ceremonial, sexy and not by a long chalk dark atmosphere. The New Yorkers pull off to make everything sound as “natural” when first listened to. Vintage coexists with alternative in perfect harmony, dancing groove with pompous heavy rock, 70s prog with early 80s post-punk. Stripping down the elements that NPB have so craftily absorbed in their sound, what catches the eye (or should I say ear) are Dear Hunter, Muse, Rishloo, Ween and, above all, the melodic “sweetness” of Casey Crescenzo whose influence has already permeated a big proportion of the American rock scene, underground or not.

The narrative and mystical nature of the songs really takes off by the prodigious vocal skills of the former Michigan classmates. Aside the sharp guitar licks and rhythmic changes, vocal-wise the album is marvellous, even though in any other band such a charismatic voice as George Frye’s would render the other superb ones redundant. The quartet’s team spirit and vibrant theatricality are of the few perspicuous elements. Once someone delves into the “mythologies” of Not Blood Paint, comes (totally unexpectedly) face-to-face with ten catchy and (no matter how incredulous it sounds) perfectly even songs, ten potential hits, ten completely interesting stories with epic climaxes, unpredictable twists and literally not a single superfluous melodic phrase. The shortly before puzzling Believing is Believing is now an addiction.

It’s almost a certainty that every year the deep underground has something in store for us to remember. The second full-length album of Not Blood Paint comes out of nowhere to redefine the term “crossover”. The band from Brooklyn presents us an odd amalgam of musical influences as far afield as metal, glam, post-punk and prog rock, with the guitars always up front. Nevertheless their style has been clearly crystallized whereas their image seems to interact “cheekily” with the music. Of course the main plus is the amazing songs, a fact that becomes instantly perceptible, despite the fact that the record requires multiple listens to disclose all of its aces. Musicphile diggers of all kinds and races, should dedicate the necessary time that this killer release deserves.