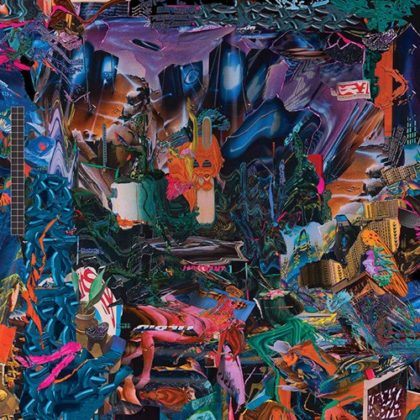 From their first steps, black midi have drawn the gazes of the fans of indie music, while simultaneously managing to excite enthusiasts of the experimental sound. Indeed, before they even released their interesting debut album Schlagenheim (2019), they had already released a live album as the band that accompanied Damo Suzuki in a concert at the Windmill club at Brixton. There have been many hopeful bands that came out of that club such as Squid and Black Country, New Road. Their London origins have created a hype around their name and the second album of black midi entitled Cavalcade, even though it’s originating from the underground field, is already one of the most discussed albums of 2021.

black midi’s debut bears the stamp of experimentation and mix of genres in a quite obvious way. However, their influences may be coming from a quite wide and yet quite related subsection of rock experimentation, based mainly on noise and math rock. In Cavalcade, without canceling their initial influences, they make a big and courageous leap, widening the sonic frame in which they create, while trying to bring closer musical trends that seem contradictory, but have the same disposition for experimentation.

From the first notes of the album it is clear that we’re dealing with indie musicians, based on the more experimental manifestations of post-punk, playing music in the limits of avant-prog, with some elements even form classic progressive rock (mainly King Crimson). It  wouldn’t be irrational to say that in this effort of “welding” of styles they’re invoking the spirit of Frank Zappa to help them, something which is very clear in the crazy opener John L, which is probably the best song of the album. Furthermore, possibly being ignorant of the danger, they’re presenting two songs with vocal jazz, cabaret and even bossa nova echoes: Marlene Dietreich and the overly ambitious Ascending North. On the other hand, Slow is a track that brings King Crimson closer to math-rock, giving the impression that they were never that far away. Besides, bands like Cardiacs and mainly This Heat are among black midi’s main influences, maybe not directly, but in the mindset of uniting music genres that Black Midi involve in their generally high aesthetic.

In just their second album, black midi tried to do something very ambitious and they managed to succeed at some extent. They managed to create a minefield of ideas and sounds and survive through it but taking some damage at the same time. Their appetite to add more and more layers in theyr sonic vision is commendable but sadly it exceeds their abilities to render that vision. In some parts the weld seems clumsy, while, even though they’re very good players, there are parts in which they can’t fully support their own ideas. The vocals are not annoying, but in parts they don’t convey the necessary emotion. The aforementioned Ascending North is a great example, in which a different voice and interpretation would unveil completely the initial compositional idea. However, Cavalcade is an album that draws the listener’s interest, it has great moments and it manages to transfer the audience in this crazy rollercoaster.

black midi infused the enthusiasm of their youth into Cavalcade, taking immediate advantage of all the benefits of their generation: the immediate access to almost any information. This musical all-in coming resembles – all thigs considered – the debut of The Mars Volta. The only drawback being that the Londoners didn’t seem ready to support the “extra mile” that they had in mind. In this sense, Cavalcade is a very interesting album, but in no sense can it be called a masterpiece.

Two years after their debut LP, black midi keep their progressive logic intact, keeping the balance of their pattrns between improvisation and structured compositions. And (once again) it is the medley of ideas and the exchange of elements and moods, where their storming fractals in other’s people’s inspirations would fail miserably. In this case, the band, that lacks the Matt Kwasniewski-Kelvin’s guitar services, offers a very homogeneous and cohesive ensemble with the individual compositions standing out as separate worlds that are bridged together in a whole one. Their dramaturgy imprints shockingly the paranoia of our untuned and tangled world, while sliding between melodic sensitivity (Marlene Dietrich), never ending adventure of compose-decompose-recompose (John L.), games between harmony and disharmony (Chondromalacia Patella), endless groove that moves the floors (Dehtroned). Jazz is the aid in all this delirium with a rock engine and math synapses, not in the narrow meaning of the genre, but more in the mentality that unlocks the development and the free spirited communication of the musicians, bringing at the same time a wide fusion philosophy. Cavalcade is the voice of a group of 20-year old friends that try to echo the troubles of their times.

Progrocks.gr: the best albums of 2021

Friday December 24th, 2021 EDITOR PLAYLISTS Comments Off on Progrocks.gr: the best albums of 2021