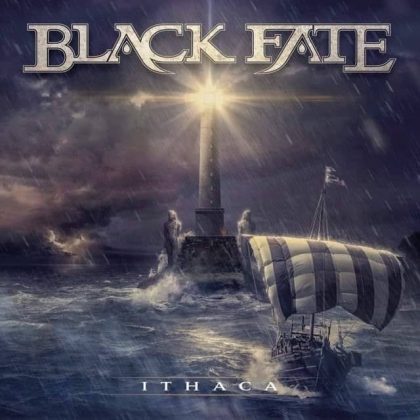 The birth of Black Fate dates back to the legendary years of the Greek metal scene. The band was formed in 1990 in Larissa and two demos (Black Fate, A Piece of Dream) announced their presence in the context of the Greek scene. But it took a full decade for their first full-length album, Uncover, to be released in 2000. Deliverance of Soul was released in 2009 and made their name more widely known with a style reminiscent of melodic power metal. This record was the springboard for significant changes for the band, and only the founding member, drummer Nikos Tsintzilonis, remained. The new band now consists of guitarist Gus Drax and the former members of the great Innosense: Vassilis Liakos and Vassilis Georgiou on bass and vocals respectively. Between Visions and Lies was their first collective effort and this year’s Ithaca may symbolize the band’s desire to find their way to fame.

Black Fate, the Greek power / prog metal band from Larissa, just released their fourth full-length entitled Ithaca. Six years have already passed since their previous record Between Visions and Lies saw the light of day. It was their breakthrough album in many ways which helped them gain a wider acceptance in the metal community. On this new release Black Fate remained true to their particular style. The sound is basically power / prog metal with many influences that come from melodic, classic and symphonic metal. The only difference is that this album shows a more aggressive approach without losing that trademark melodic side of the band, and it goes a bit darker in places than the previous one.

The vocalist, Vasilis Georgiou, really shines once again, with a very nice delivery, and his soft and expressive voice reminds me a lot of Roy Khan, as usual. Technically, the band performs very well here, and the riffing is pretty good too. Gus Drax plays guitar solos that serve the songs really well and is always ready to enrich the overall quality of the music. They have an ear for making catchy hooks, and melody plays a key role in each song here. The symphonic parts and the orchestration are also developed further in this album, and some parts sometimes remind me of Kamelot even more than before. The production is exceptionally nice, showing all kinds of nice small details of the instruments used. Musically, Ithaca might even match older Kamelot albums in quality, but it’s generally a more self-conscious, modern experience and therefore hard to compare.

The music has a lot of cool details in the arrangements and rhythms. It’s obvious that Black Fate didn’t want to get trapped into repeating a formula and tried to experiment with various sounds, although sometimes it seems that they went too far into an unfamiliar territory for them. The highlights of the album are Savior Machine which shows the maturity in songwriting, while Reach for the Stars is an infectiously melodic song, and the ballad Rainbow End is simply great. I can’t say every song has the same sort of impact on me, but the overall feel is very positive.

Ithaca is another good record by Black Fate and the perfect proof that the success of their last album was not a coincidence. As usual, I like the more melodic elements and this album has something for everyone. This collection of prog / power songs deserves to be heard by many serious metal fans.

After six long years, Black Fate from Greece return to discography with Ithaca, breaking the silence since the release of Between Visions and Lies. The band is here again and its familiar style is expressed in an impressive set of 12 tracks. Their music remains based on power metal adorned with progressive elements, and beautiful refrains that give them a memorable perspective. Based on the sound of Kamelot, the band has the features of a sound that is now increasingly rare. The very good guitar presence of Gus Drax is successfully intertwined with Themis Koparanidis’ keys, with the drums and bass of Nikos Tsintzilonis and Vassilis Liakos respectively giving the necessary dynamism for a genre reminiscent of the 90s. The voice of Vassilis Georgiou, which reminds us of Roy Khan, is the catalytic element that elevates the band’s songs. Without giving anything new here, Black Fate have the spark and the experience to make an album that ignites the listener with familiar and yet very well played sounds.