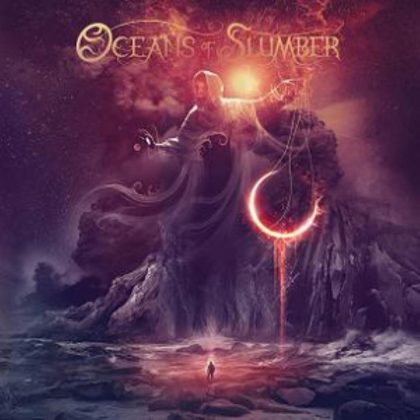 Oceans of Slumber were formed in 2011 in Houston, Texas, something you would hardly imagine with the dark and twisted music they play. Their debut album, Aetherial (2013), became known only in underground circles. The coming of Cammie Gilbert in 2014 and the EP Blue (2015) (which included covers) did not foreshadow the band’s next steps. In 2016 they signed a contract with Century Media and the band released two very special albums, Winter (2016) and Banished Heart (2018). Since then, the only permanent members are Gilbert and drummer Dobber Beverley. Apart from that, however, the main reference axis is the musical vision of the two of them, i.e. a special mix of progressive and death metal incorporating classic and atmospheric doom metal, progressive rock and other genres. Thus, we’re in 2020, and with the aforementioned vision in mind, the six Texans have released their self-titled album. Maybe it’s time for wider acceptance.

A fire in the vast darkness

The productivity of Oceans of Slumber does not seem to stop with a third album in four years. What one can quickly distinguish from the first spins is that this album has been thoroughly worked, and that the three new members (Semir Özerkan on bass, Jessie Santos and Alexander Lucian on guitars) seem to have bonded perfectly with the rest of the band.

The production by drummer / composer / band leader Dobber Beverly as well as the mixing and mastering by the great musician and producer Dan Swanö are exceptional and exemplary for the genre, and highlight all the compositions and assets of Oceans of Slumber. They give a natural and organic tone to the recordings, and the album really “breathes”, having the necessary thick sound it needs. Special mention should be made of the fantastic work of Giannis Nakos on the cover and artwork of the album, which is one of the most impressive we have seen in the last (many) years.

Since we are talking about genres, what do Oceans of Slumber really play? On this album you can find influences from progressive death metal (Opeth, Edge of Sanity, Ne Obliviscaris), the 90s British atmospheric doom scene (My Dying Bride, Anathema, Paradise Lost), Gathering, Type O Negative, as well as scattered elements of progressive metal, sludge, and even black metal. All these are combined in a masterful way, many times even within one song, resulting not in simple stitching of themes, but a single musical story with a solid structure. The progressive death metal umbrella is probably not enough and can’t exactly identify the band without the aforementioned analysis of influences.

Dobber’s playing is technical and full. Although he has been accused of overdrumming in the past, I think a lot of people will reconsider. In any case, of course we are talking about an album with a demanding and very technical drumming, and many times he is the protagonist. In many cases, however, the drums play a secondary role for the sake of the excellent strings, the keys, and of course Cammie Gilbert’s voice.

The most recognizable figure of the band stands out once again with her expressive voice and theatrical performances. Personally, I do not consider Gilbert a unique singer, as written on social media and the press, but I think she’s remarkable and very suitable for the band’s style, especially when it calms down and becomes atmospheric and/or melodic. In this album, she maintains a high performance level, as usual.

The compositions that stand out are Soundtrack to My Last Day, Pray for Fire (both satisfy any early Opeth withdrawals), the atmospheric The Colors of Grace with the amazing duet of Cammie with Mick Moss (Antimatter), and I Mourn These Yellow Leaves among other, very good compositions. It is difficult to find any weakness in this album. If one can summarize the emotions evoked by Oceans of Slumber, the words darkness, sadness, melancholy cannot be missing.

Great success may not come with this release (due to the current conditions), as the band’s music is addressed to a special type of audience (to be precise, the common section of diverse audiences), but it will certainly be appreciated in the future and most likely will be the band’s reference point in the coming years.

The fourth album of Oceans of Slumber confirms that it is a good band that has not found its own style, so that it can unfold its virtues. 2016’s Winter had made some buzz in the metal community, but I think that the band’s more special features were revealed in The Banished Heart, especially when they took advantage of Cammie Gilbert’s unique voice. In this year’s self-titled release, this effort was largely abandoned, as the structures bring the guitars back to the forefront. In the opening track, The Soundtrack to My Last Day, the Opeth approach may fit perfectly into Cammie’s velvety voice and the interchange in growls may be as convincing as this sound requires, but this is not the case with the rest of the songs. The most typical example is the rather unconnected Total Failure Apparatus, which leaves you confused between multiple, sloppy changes that mostly had absolutely no meaning. Oceans of Slumber seem to be out of their league when they want to play faster. On the contrary, when they follow their rhythmic style, remaining faithful to the doom metal-meets-soul recipe, they manage to charm those who are somehow fascinated by this mixture. The Red Flower sounds as if it emerged from The Banished Heart sessions, and is perhaps the most authentic moment of the album, with Gilbert’s superb performance accompanied by a piano and the guitar and bass feedback.  In a nutshell, it’s not about effort, it’s about style.

Wednesday May 11th, 2022 Νέες Κυκλοφoρίες Comments Off on Wilderun – Epigone