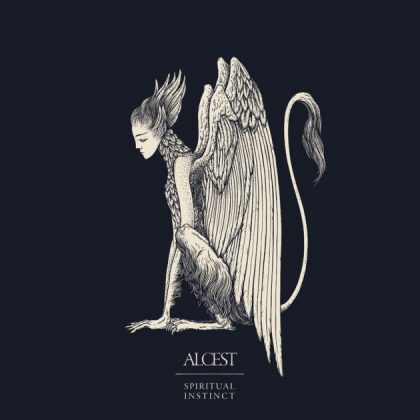 Alcest is a prime example of groups that fall in the extreme metal genre and their progress and growth is truly interesting. The impact of their debut album Souvenirs d’un autre monde in 2007 is still profound and both Écailles de lune (2010) and Les voyages de l’âme (2011) lived up and added to it. The lukewarm Shelter (2014) which was a pure post-rock album passed out of memory when the magnificent Kodama (2016) came out and our attention was justifiably drawn when the release of Spiritual Instinct was announced.

The direction of Neige’s vehicle is always an exciting journey towards new destinations; or maybe not always?

The release of Spiritual Instinct is a bet for Neige. Kodama was probably the most crucial moment in Alcest’s course, not necessarily because it was their best release, but mainly because it provided a host of good compositions where all the elements that define the band were concentrated in it. At this turning point, Neige chose to play safe presenting a collection of six songs which verify once more his compositional maturity and their patented sound.

Right from the first notes of Spiritual Instinct the listener is plunged into the individual world which Neige has moulded through Alcest. At this point it should be mentioned that in a subgenre like blackgaze where pretentiousness and lack of personality is the rule, the music and style of Alcest is like a lighthouse in the night. Therefore the main issue of the album is compositions themselves, none of which is bad, but also none (excluding maybe the very good Sapphire) would deserve a place in Kodama. Nevertheless, the flow of the album is really enjoyable. Les Jardins De Minuit plunges the listener in the surroundings of the album which climaxes composition-wise with the following track Protection and the aforementioned Sapphire. L’île Des Morts that comes next sounds promising and surely does not disappoint even though it bears the symptoms of ‘Intelligent Composition Assistance’ a symptom which resurfaces mainly on the last two tracks. The atmospheric Le Miroir would make sense if a final epic followed it up. Unfortunately the title-track that drops the curtain does not provide the launch we were hoping for. Moreover, the 41 minutes seem too few for the “stretched” orientation of the album’s style, leaving a taste of incompleteness lingering.

Spiritual Instinct is the first album of Alcest that adds nothing new to their myth (even the experiment of Shelter that didn’t work out did offer something new). Nevertheless, it features a very good first part which will undoubtedly satisfy the fans of their sound and probably if they took more time, the result would be even better.

Spiritual Instinct is probably Alcest’s most professional work. On the one hand, we get a stellar production (the guitars are sublime), the band at top form both in performing and singing and the songs are meticulously crafted down to the last detail which resemble each other, based on the individual style of the band. But on the other hand this professionalism reflects on the safe path the opted to take for the first time, but this would not be a flaw had the quality of the songs was not above the usual standards for other bands, but not for Alcest (excluding Protection). The direction of Neige’s vehicle is not new (and Kodama is clearly superior). Blackgaze overshadows shoegaze, but the post-rock element dominates, stumbling upon the creative limitations of a musical genre which has entered a cul-de-sac. Neige and Alcest were and still are a hope of renewal, but this cost is unfair to the band.

Hooffoot – The Lights in the Aisle Will Guide You