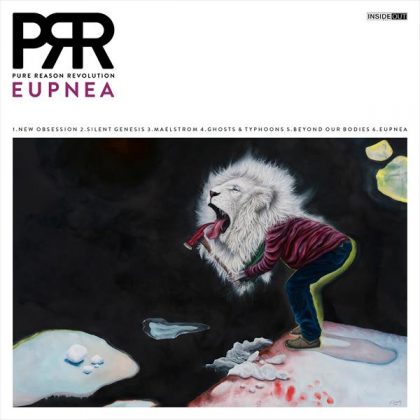 Pure Reason Revolution were formed in 2003 in London by Jon Courtney (guitar, keyboards, vocals) and Chloe Alper (vocals, bass) and two years later came their alt-prog rock debut album The Dark Third which thrilled audience and critics alike. Sadly, their sound became more electronic and industrial forms in the subsequent Amor Vincit Omnia (2009) and Hammer and Anvil (2010), the songwriting failed to satisfy and, inevitably, they disbanded after a gig at Heaven in London on November 30, 2011.

In 2019, the two founding members met with a common goal to soldier on. Eupnea came out in April and our expectations about Pure Reason Revolution are, once again, great.

The belated successor of The Dark Third

If anything, this is a very pleasant comeback, ending a decade of silence of a band which was “stigmatized” by the quality of its debut album, or maybe better their failure to meet the expectations it raised. The talk is about the British Pure Reason Revolution and their first album The Dark Third, which back in the distant 2005 pulled off single-handedly to brew a new wave of fans for the British progressive sound and attract their attention towards their musical proposition. But no matter how impressive their entrance into the scene was, the two average albums, the hiatus that followed and the separate ways the core-members went surely did not live up to this marvelous first step.

But Jon Courtney and Chloe Alper decided to re-energize Pure Reason Revolution and they referred to the fabulous The Dark Third and their early years as a whole to draw the necessary inspiration from the influences that brought them then to the fore. Therefore, walking back to familiar sonic paths –leaving the electro/pop moments of Amor Vincit Omnia and Hammer & Anvil behind- was a step that themselves felt they owed to take. Eupnea could well be considered as the long overdue successor of The Dark Third, carrying the experience they gained after all these years and two intermediate experimental albums which diverted them from the purely progressive rock frame they became part of in the first place.

So, when the enthusiasm that ensued The Dark Third subsided, PRR disappeared off the face of the earth but now their new release is to bring them back where the action is with an impressive restart. The release of the first single Silent Genesis, whose duration and build-up promise a return to their earlier approach, had already set the stage, namely gradual development of the ideas which bear the familiar early-Pink-Floyd stamp with the double vocals showcasing the strong songwriting and their own potential and, ultimately, setting associations into motion with songs like In Aurelia and Apprentice of the Universe. Although original members, like the guitarist or the drummer, are not part of the lineup of the band’s fourth release, Eupnea manages to bridge the gap and the group goes for a second bite of the cherry with a great album under its belt. This is because Eupnea as a whole is a prog album which now includes the dynamics that were elusive so far, but more than that it features heavier guitars which interact magnificently with the keyboards throughout the album. On the other hand, on tracks like Maelstrom the different stages that Pure Reason Revolution went through strike a balance, including the more experimental turn they took; and the key element on an album that marks the return of a band, after the initial reservations, is this very balance which pulls off to demonstrate the identity of the band while experimental touches are impulsive and not just a parenthesis.

Six compositions, interspersed with atmospheric moments, heavy riffs, a variety of keyboard and synth-sounds, meticulously crafted renditions with the familiar double vocals which work harmonically, constitute an album that the listeners and fans of this specific genre were awaiting for since The Dark Third and lives up to the expectations that everybody has ceased to hope for ten years ago. Especially the self-titled 13-minute composition that closes the album makes a claim on the peak of Pure Reason Revolution’s creativity in their fresh start and turns them into a force which returns to claim back its share of the laurels on the British progressive map. A mature return, modern sound, yet with Porcupine Tree and Pink Floyd influences thrown in, but a sound nonetheless that goes back to the roots of Pure Reason Revolution that hardly any fan would expect.

New album, at last, from Pure Reason Revolution after ten years! I’ll come right out and say that I am one of their biggest fans ever since I was turned into them when I was introduced to The Dark Third. Eupnea is the situation where the breathing is normal and it seems that Pure Reason Revolution are back to their normal pace. This album sounds more like the next step from The Dark Third with atmospheric melodies replete with sentiments, velvet vocals, keyboards that recall vintage progressive (60s – 70s era) and strong guitars. If you listen closely you will discern digital effects back in the mix  – sounds from hospital, telephones, etc. Eupnea, like the pervasive tranquility which permeates gradually your body while you are listening to the album. I could go on and on, but there you are… A must-listen record!