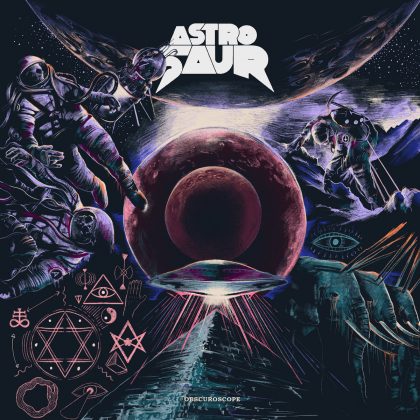 On Bent Sæther’s of Motorpsycho recent interview for progrocks.gr, he gave his account of the most interesting contemporary Norwegian bands and Astrosaur were among them. Truth is that the trio from Oslo has nothing to do with an ordinary band. Even though they have graduated from the Conservatory of Music of Kristiansand, it is virtually impossible to pick up on that when listening to their debut album Fade In // Space Out (2017). Their alloy is original indeed and their progress merits the attention of every prog fan who are not attached to the traditional sense of the genre.

Obscuroscope was written in between the band’s gigs and the breaks from the tours of the other bands that the band members are engaged to and the recording sessions took a mere six days.

A journey towards unknown destination

Poyekhali that kicks-off the album is a pleasant surprise. The aggressive riffs of Astrosaur’s leader Eirik Kråkenes (who has performed as a session musician with Leprous and Ihsahn) impress and the direction of the music as a whole becomes evident. The creative search which includes the blending of different sounds and styles is the common axis while allowing room for improvisations, but in a stricter compositional frame compared to their debut album.

Karakoram II keeps increasing the energy via fast outbreaks which range between post-rock and black metal, whereas the creative spontaneity is kind of more intense on the tracks that come next. The way that jazz/rock blends with the spacey prog rock of Astrosaur is admirable, as well as the omnipresent metal (mainly in the form of post metal) character which does not eclipse the rest (a common phenomenon these days). Truth is we would not expect anything less from a contemporary Norwegian band, let alone Astrosaur with the musical education they possess. Especially Kråkenes’ playing is at times impressive with regard to his rhythm parts and arsenal of riffs.

As the album progresses things remain pretty much the same which could not be a flaw; yet the admirable energy of Astrosaur’s music does not make up for the somewhat limited compositional level of Obscuroscope and their rather vague artistic orientation. Listening to songs like Supervoid and the eleven-and-a-half minute Homewards which closes the album, the target becomes less clear and understood. Aside the blending of the elements and the solid background for live shows, a good part of the material is not up to the par to keep the listener’s interest after the impressive start. Although the album exudes a feeling of free-association, the emphasis on the rhythmic parts at the expense of melodies results on the one hand at a tight outcome, but way too much on the other. This is the conclusion that someone is bound to come after, for instance, the magnificent melodic part halfway White Stone which is ended by yet another post-metal riff.

The conditions under which the ideas of Obscuroscope grew legs become digestible if you listen closely to the album. There are many beautiful parts, but it seems that the spaceship of Astrosaur heads for unknown destination. This could be fascinating if the technocratic view was out of the picture.

The recipe that the Norwegian trio utilizes on Obscuroscope is more or less the same compared to its predecessor Fade In / Space Out: long instrumental compositions so that the numerous ideas have the room to stretch out and interchange while their repertoire engulfs a wide variety from prog metal and math/post rock to stoner and dashes from black metal melodies. Their main weapon is, in my opinion, their technique since they glide from atmospheric to heavier parts effortlessly while they fare pretty good composition-wise although the frames they choose to move into could be described as conducive for this. The skills of Astrosaur’s main leader and composer, Eirik Krakenes on the guitar, as well as the infuriatingly precise and flawless rhythm section of Steinar Glas and Jonatan Eikum are imprinted ideally on tracks like the one-two Poyekhali and Karakoram II as well as the epic Homewards that drops the curtain. A quality release that will repay those who like their post metal adorned with prog additions.