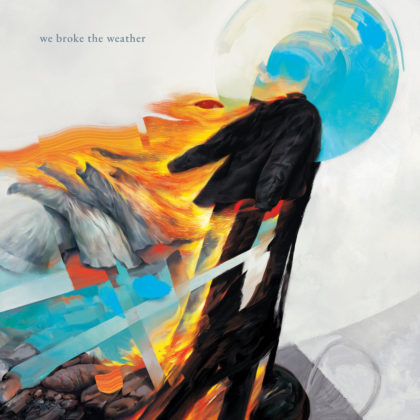 Three years ago, five musicians, until then unknown to each other but with a common goal and the same love for music, formed the band we broke the weather. They five musicians are: Steve Muscari (bass, synthesizer), Andy Clark (drums, vocals), Kev Ditroia (guitar), Scott Wood (guitar, vocals, alto saxophone) and Nick Cusworth (vocals, tenor saxophone, flute, bass, clarinet, keyboards). Without knowing from the outset the musical direction they would follow, they found their common points, and each one drew on their different influences. All this was enriched by their humanitarian and ecological concerns on a lyrical level and resulted in their first album, consisting of 10 songs with a total duration of 57 minutes.

Probably the best prog debut of 2022

The band from Boston makes an introduction with the beautiful saxophone melodies on Through the Wall. The fact that they use both alto and tenor saxophone is impressive. The track flows delightfully with the jazzy guitar notes being lively and sharp. A beautiful keyboard solo will justify why this track was chosen as the album’s single.

we broke the weather manages to remind many things from the wider rock spectrum. For example, Rot King, These Old Bones and Niceberg will immediately and clearly bring to mind Thank you Scientist, Dear Hunter and Mars Volta, both musically and vocally.

The short instrumental wbtw seems to divide the album in two parts, while the flow is not broken, but enriched in the best way. Their admittedly beautiful, playful, alt-prog becomes more slow-paced and melodramatic on the superb Fire Season, with the guitar solo leaping straight out of the 70s.

We won’t find any long-winded improvisations on the record, but that doesn’t mean that there’s a lack of moments where the synergy of the instruments creates moments of magic, like in Bellwether and In Web. The mix of intense electricity and saxophone will bring to mind a version of King Crimson and Van der Graaf Generator, if they had been formed in a Boston college in the 90s. In addition, the lyrics are important for the band and their delivery at times has something of the art of storytelling, managing to create images and therefore emotions. One of their characteristics is dynamic contrasts. The bursts of electric guitar that end up being even noisy, while the next moment a calm passage completely changes everything.

There is no member of the band who does not have an active and important contribution to the quality of the album. Perhaps the drummer, Andy Clark, shines a little more, but at the same time I feel Ι have to mention Steve Muscari’s contribution on bass, the superb uplifting sax playing of Scott Wood and Nick Cusworth, and Steve Muscari’s keyboard touches. The epic, dramatic ten minutes of The Fog gives each member time to develop their skills and is the only piece with such a long instrumental part.

The last track, Frequency, is their most alternative song, but the band’s love for prog in its entirety can’t be hidden there either, they bring it to a more technical level as it evolves.

The album has not been released by any label, but I am certain these nice guys will soon find a strong label to support them.

On the Bandcamp page of we broke the weather it is mentioned that the process of composing the songs of their first album lasted three years, without an agenda and with the members not knowing each other. Judging by the result, we broke the weather might in a parallel universe have been a very beloved family, since their debut album has a remarkable coherence and gives you the feeling that this is material that arose from an already mature band. The alt-rock vocal melodies (Rot King, These Old Bones) flirt with jazz-rock escalations (Bellwether, The Fog), creating a new prog rock proposal, which departs quite a bit from the modern cases of Thank You Scientist and The Dear Hunter. This happens mainly because the band tries to compose much more freely, without having pre-decided on the strict structures of the songs. With the result sounding adventurous, thankfully the Americans have largely managed to avoid the problem of the songs sounding like rough jams. This record came out of nowhere and has already impressed quite a few people. It is almost certain that if they maintain this enthusiasm, and some quality factors such as production and orchestration are improved, we will witness even greater things in the future.