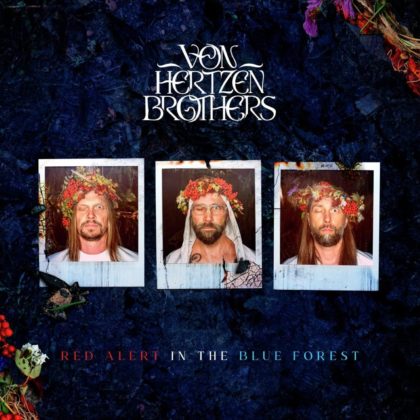 The story of Von Hertzen Brothers and their path in discography have reached 21 years. Looking back in time, the reliability and faith of brothers Kie, Mikko and Jonne to their original vision is admirable to say the least.

With the exception of their weak debut (Experience, 2001), the remaining six albums of the band until this year’s Red Alert in the Blue Forest show growth and maturity, although Approach (2006), Love Remains the Same (2008) and Stars Aligned ( 2011) are by all accounts the band’s best albums to date.

Five years after War Is Over, the level of Von Hertzen Brothers’ eighth album is a very interesting question.

Playing on repeat is what matters most

The status of Von Hertzen Brothers inside and outside of Finland is incredibly different. As common as it is for Finnish rock bands to enjoy great success in their country, this is usually reflected, at least to some extent, internationally. The examples are many, mainly from metal and perhaps here lies the answer to the relatively small appeal of Von Hertzen Brothers abroad. The music they play doesn’t have the support of the “heavy” music industry and the probably not so dedicated fans of the genre. This, of course, is simply the result. Apart from that, the band itself has never sacrificed even a tiny bit of its artistic vision for the sake of commercial success.

The story of Von Hertzen Brothers continues with this year’s Red Alert in the Blue Forest. Listening to the whole record over and over again (which is very possible…) one easily concludes that the tracks have a common purpose, but not a commercial one, and as much as the melodies are very intense once again, there is no “easy” hook at any point. The band’s palette is still dominated by the mix of progressive rock and alternative rock, but the important addition to the recipe is the folk element, in an increased dose. The lyrics focus mainly on the natural environment with an emphasis on Finland, the admiration for nature and the awareness of the dangers it faces in our time, with an extra fantasy element adding a mystery that in places sounds almost ritualistic.

The element that impresses from the outset is the rich orchestration, which changes based on the needs of each track. Yes, there is a wide variety of tracks. Dynamic, electric, acoustic, direct, epic and combinations of course. It’s impossible to get bored listening to this album and maybe even if you don’t get blown away overall, it’s very likely that you’ll catch yourself humming some of its great tunes when you’d least expect it (true story).

In a set of 11 well-crafted songs, the opener Day of Reckoning stands out, a typically energetic Von Hertzen Brothers rocker, while the follow-up Blue Forest has an exciting alt-prog development that harkens back to Porcupine Tree and the more adventurous moments of Steven Wilson’s solo career. The anthemic All of a Sudden, You’re Gone easily sticks to mind with its wonderful vocal melody, the wonderful development and Mikko’s amazing performance, and right after that comes probably the highlight of the record, Peace Patrol, a delightful epic with a dynamic start, a narration in the middle, and a triumphant solo section at the end.

This album is full of wonderful moments. There is no filler on the record and I’m sure that many may like more some other tracks. Red Alert in the Blue Forest is definitely not the best Von Hertzen Brothers album, but listening to it will convince you that it really doesn’t matter. That is, because even if you’re not amazed by what you hear, you mysteriously want to listen to it again and again. This is a great victory and it is no coincidence that it is achieved by a band with such soulful songwriting.

Von Hertzen Brothers have been around for more than 20 years now! While we can’t say that they are the future of the genre, or that they have revolutionized the sound, we can safely say that they have grown from a band that had a couple of very good songs in every release, to a band that will release a full length album that will be very enjoyable from start to finish. Not to mention their great live performances. Red Alert in the Blue Forest is another example of an album that doesn’t break the mold. Nevertheless, it shows the brothers in a good and creative spot with more instruments shaping the songs, and once again fusing rock with folk and pop.  One just has to listen to the 10 minute long Peace Patrol to see how multi faceted their sound is. I can only assume how nice this song will be in the live version. Other highlights come with the beautiful, folky ballad Sörderskär and the more psychedelic passages in Blue Forrest that starts very calmly and aerie, before it becomes more hectic for the second half with more melodies and instruments intertwining. Honestly, Red Alert in the Blue Forest has many great moments that are undercut only by the slightly too long of a runtime. It is a record that any rock music fan can enjoy and it will keep on discovering things with more listens.