It’s been nine solid years since the first, and up to this day only, live show of the British prog metallers Threshold in our country. The calendar showed 31 August, 2008, it was the No Budget Festival and the venue was the Kipotheatro at Larissa. Damian Wilson who then had made his second come-back replacing the late Mac is not anymore a band member. Since then, the magnificent March of Progress (2012) and the satisfactory For the Journey (2014) were released, the third split up with Damian Wilson took place, Glynn Morgan became once again the front man and the wonderful Legends of the Shires hit the racks shortly before. But the foursome of Groom, West, Anderson and James is unaltered and they go on relentlessly, having established the band as one of the most important prog metal standards since the dawn of the 90s. 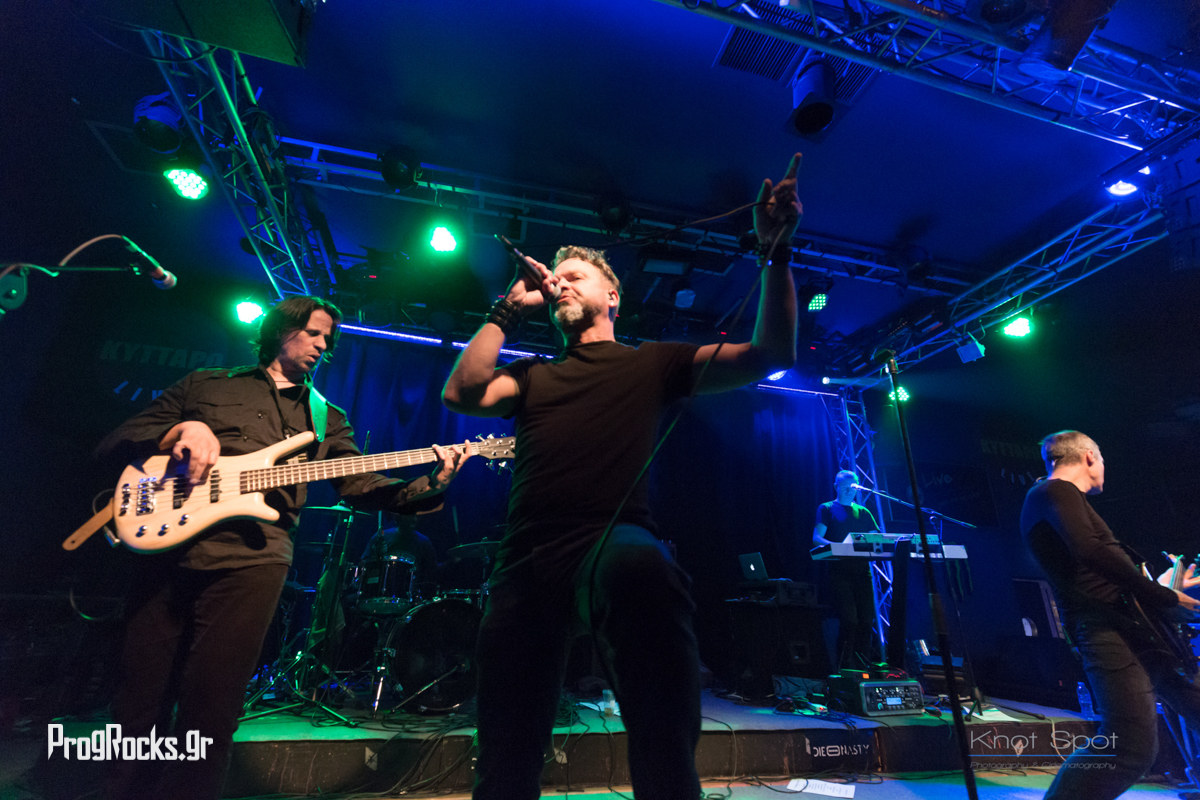 But the time has finally come to see them in Athens at the always cosy Kytarro Club. The schedule was strictly adhered to and shortly after 20:30 the Athenians The Silent Wedding climbed the stage to warm up the audience. Their melodic heavy / power style that featured elements from Evergrey and Royal Hunt seemed to be in order. On a side note, they supported Threshold at the European Journey 2014 Tour; consequently, they were familiar with the set-up. Some troubles with regard to the sound made their appearance which plagued Threshold too, yet their performance was not hindered by them. More specifically, the rest of the instruments were drowning out the singer at times. Nevertheless, it was obvious that the band is tight and they played reasonably well. Most of the songs that they played were from their latest album Enigma Eternal that came out this year. 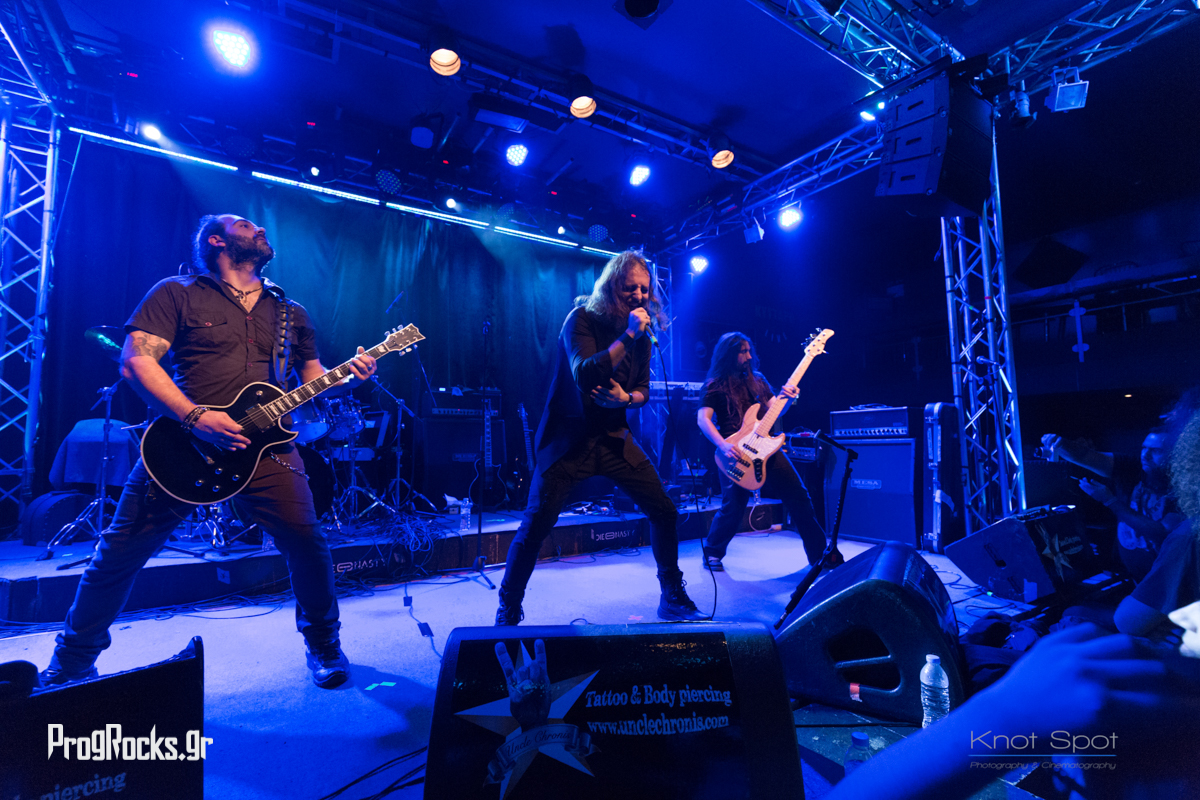 Shortly after 21:30 it was Threshold’s turn to storm the stage, kicking their set off with Slipstream off The Dead Reckoning. The audience gave them a warm welcome, even though the sound was still giving trouble, with the bass and the drums being pretty high in the mix whereas the guitar along with the keyboards were pushed back. Things were improved somewhat when the second tune of the set list started and thankfully so because it was one of the highlights… 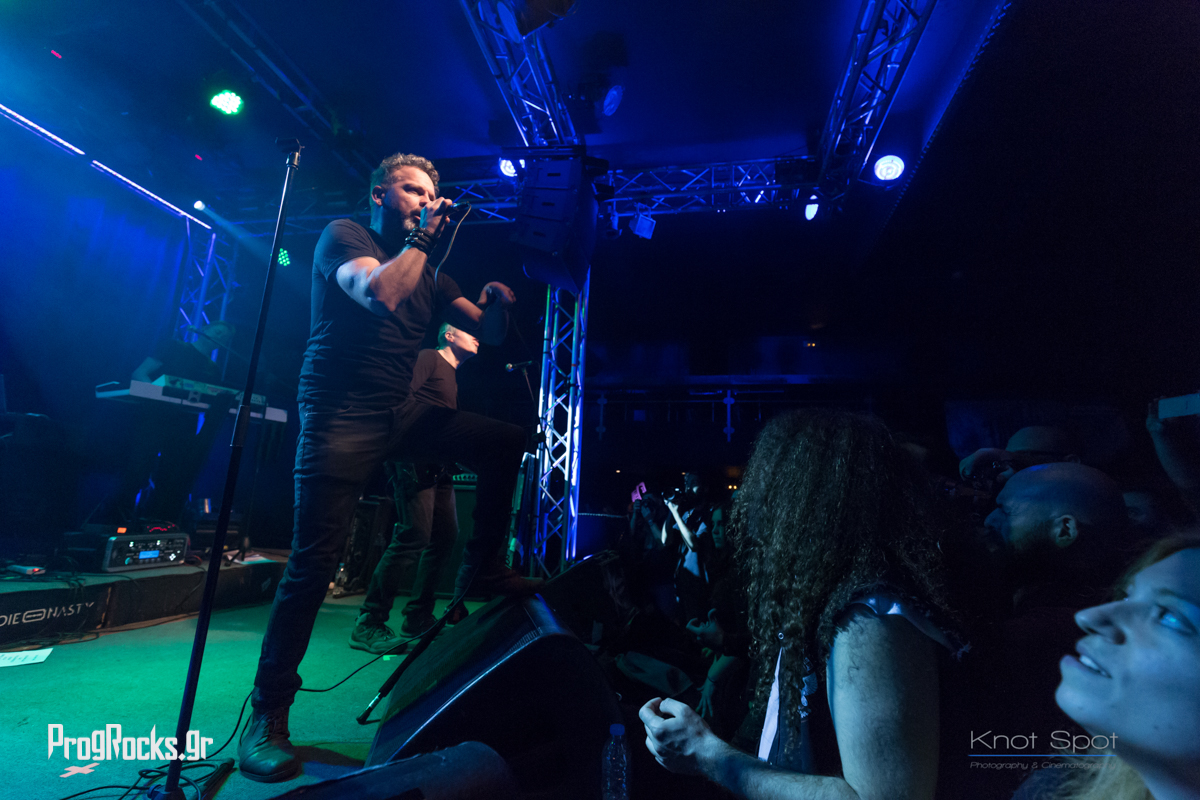 …which was none other than The Man Who Saw Through Time with Glynn Morgan not just on the top of his game, but also fulfilling guitar duties to reproduce faithfully the studio double solos. Next came Sunseeker off the mighty Psychedelicatessen which was very good, though not as punchy due to the absence of the second guitar. Meanwhile the sound was improved drastically and musicians and audience alike were warmed up for good. 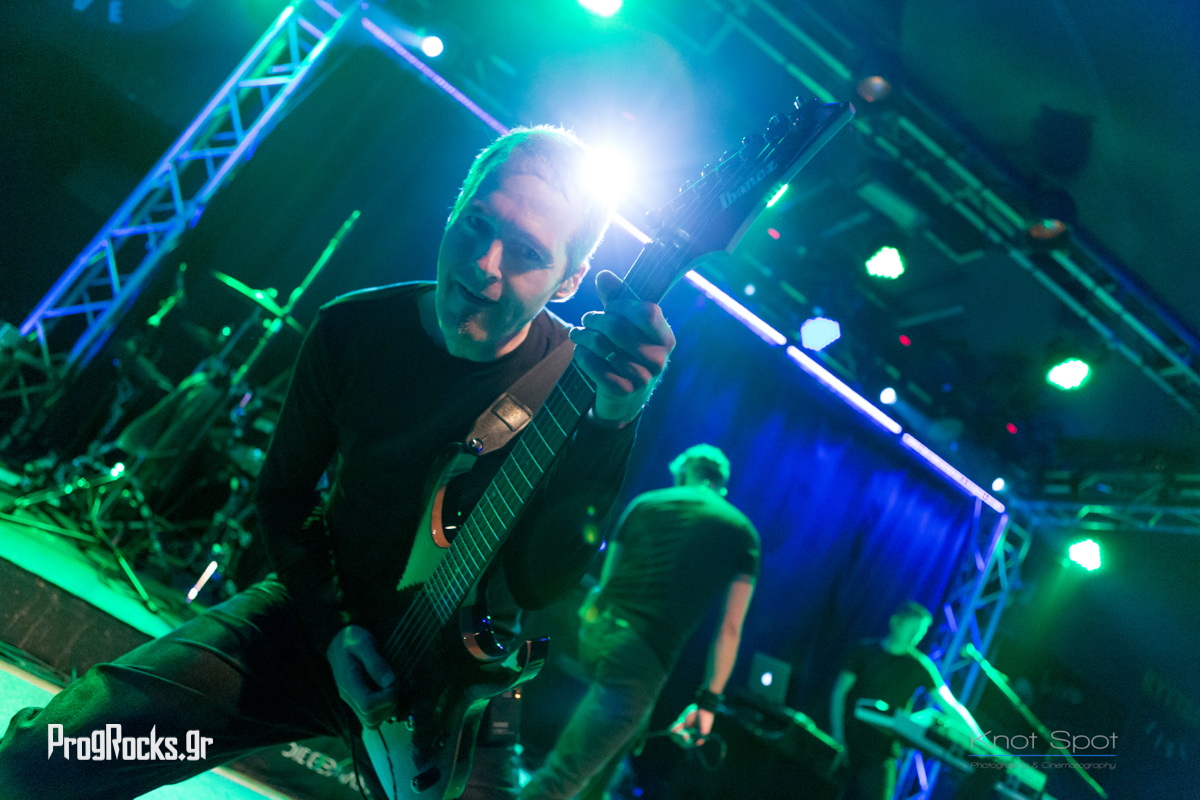 Hypothetical (2001) was represented by Long Way home, followed by two more songs from their latest opus, The Shire Pt 2 and Snowblind which the audience clearly relished and it was very familiar with them. Chaos reigned with the beloved Mission Profile from Subsurface (2005) which was perhaps the summit of the show. Everybody was singing their head off and Morgan’s performance was spectacular, as if the song had been written for him. 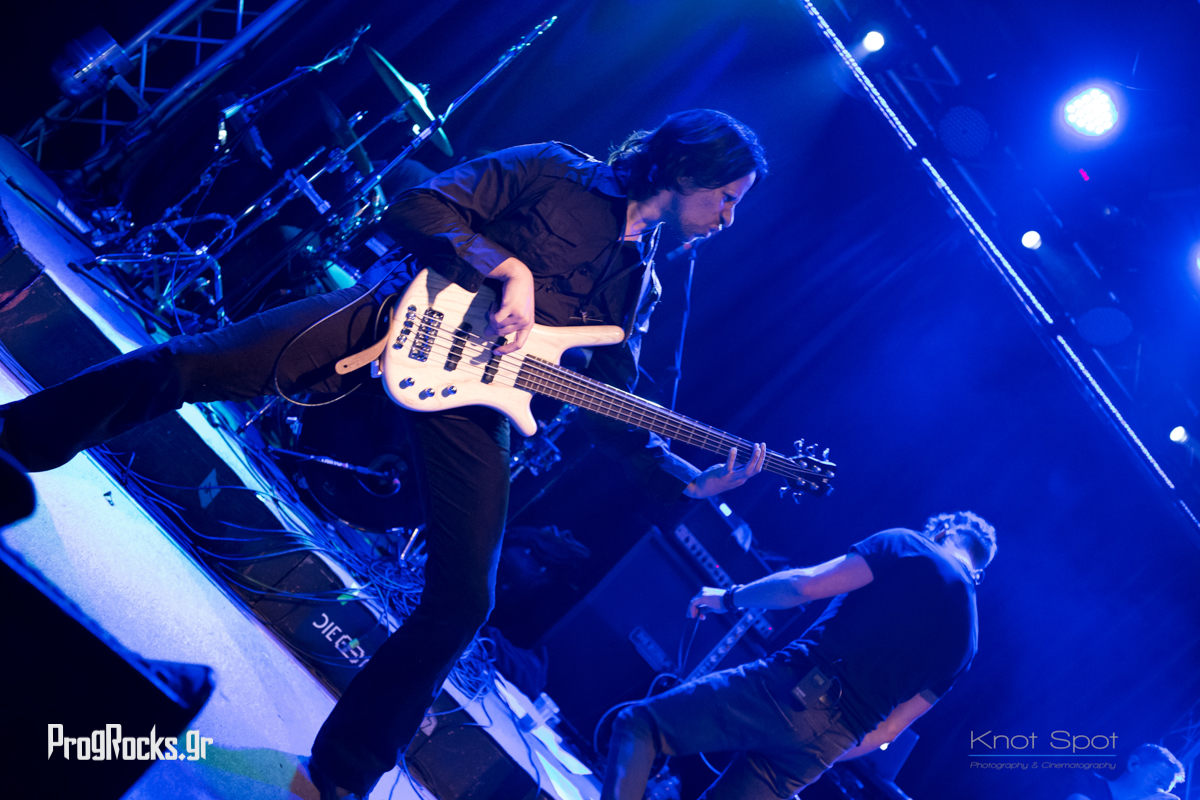 Pilot in the Sky of dreams and Hollow were next before the band revisited Psychedelicatessen with Innocent, a composition by Morgan who even though sounded a bit worn out he was pretty good and the audience had a good time with one more dear song out of their long back catalogue. I admit that Stars and Satellites hadn’t impressed me that much, but it became clear that I had underestimated it. It was a great live number and worked wonders for Morgan who seemed to regain strength. The band launched into flawless renditions of Ashes from March of Progress and the other epic from their latest one, Lost in Translation. They rounded the set off with Small Dark Lines which got me wondering why they didn’t open with this one because the energy it emanates is tremendous. 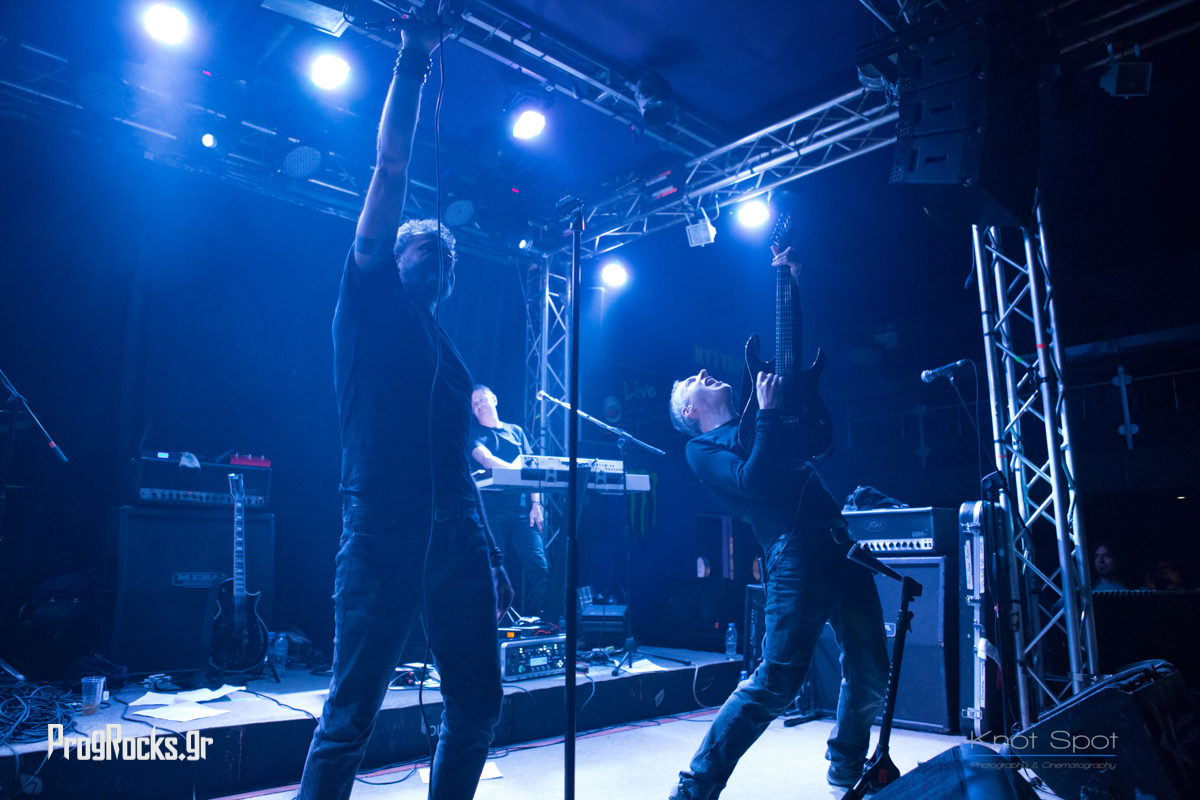 Anderson and James were a pure delight both bristling with energy on stage as well as the evergreen Groom with his clean, melodious and technical playing. West proved one more time that he is one of the greatest keyboardists in prog metal. For the end, I make special mention of Morgan who not only did he support his material ideally, but also he sang perfectly tunes which are not suitable for him since Wilson and Mac are completely different singers. 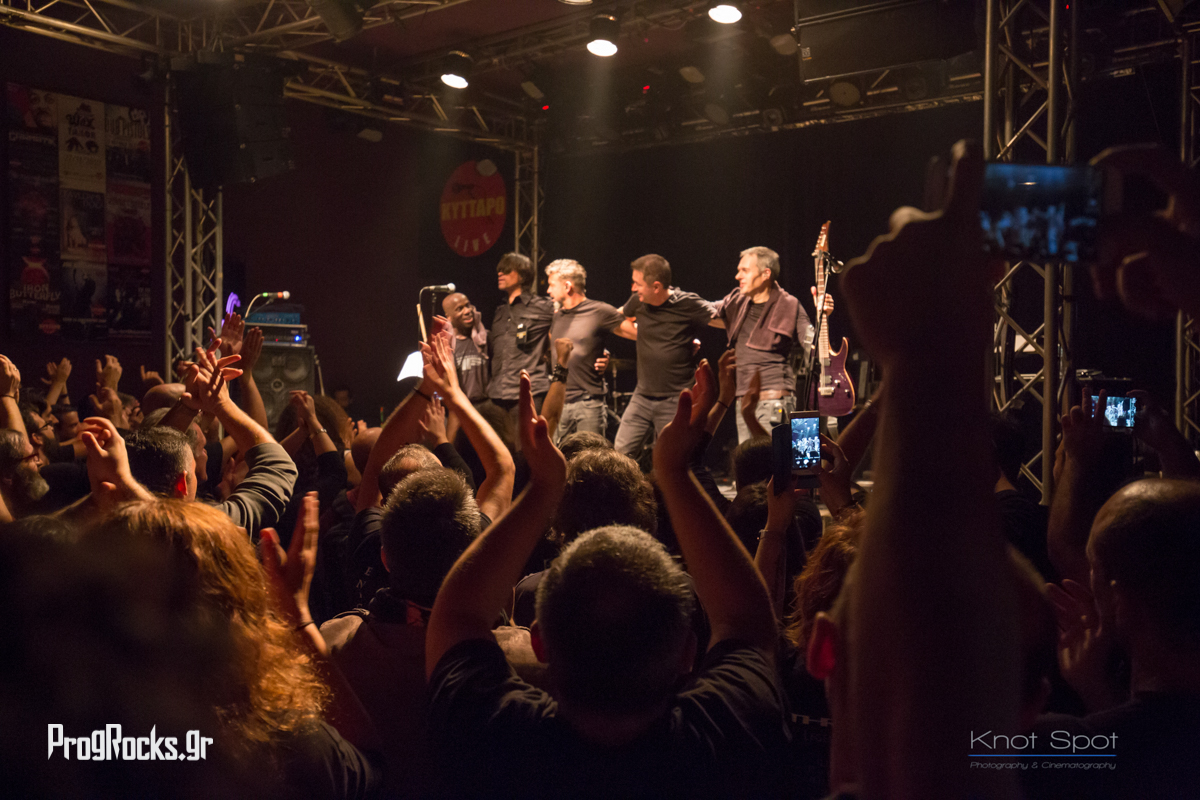 I don’t want to dwell on the crowd that didn’t sell the venue out (a common phenomenon now in Greece) as the case should be with such bands with fiery performances. That fact didn’t seem to deter the band a whit since everybody was cheerful and they looked like they were having a lot of fun. It was a great night and I do wish, like all these people who honoured the group, to see them again soon on stage.

Get a taste from Threshold’s forthcoming album