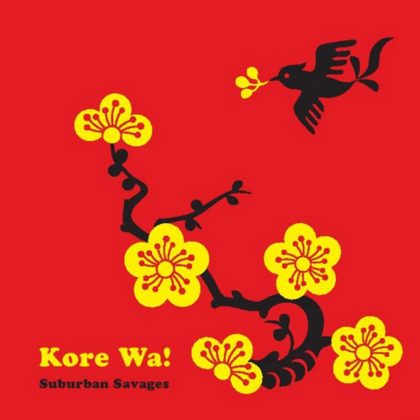 This is the debut of Suburban Savages from Norway (second if we count Tr-Ond And The Suburban Savages – 2007), the new band of Trond Gjellum, drummer of the legendary Panzerpappa, but he is not the only one with an enviable resume. Here we find members of Ghost Karaoke, White Willow, Weserbergland, Fraction Distraction, Now’ve Got Members and of course Panzerpappa, making Kore Wa! very interesting before listening. The mix of sounds which flow from the speakers confirm it…

The second album from the Norwegian (Panzerpappa-side?) project sees them dropping the “TR-OND and the” from the band name leaving them as mere “Suburban Savages”; a fitting title indeed, considering the type of music they play! It took Trond Gjellum (main composer and founder, Panzerpappa) and his bandmates ten years since the debut and the result is a record unlike most in the prog world – the Japanese title drops the appropriate hint.

You can tell from the latin / tribal rhythms of the relatively accessible opener Fade Into Obscurity that the listening experience is going to be an intriguing one. The band borrows from virtually every corner of the interesting music world, from ethnic to avant-prog, progressive electronic and pop. The combination of moog guitar and a peculiar church-organ keyboard effect gives this album an intriguing, distinct sound. Examples are the percussion-heavy, dance-like Pronk and the instrumental Guzarondan which provide an up-lifting mood with computer-like, folk and cosmic sounds. The vocals, without standing out, are a reliable partner to this musical journey; one can pick up on the obscure tonalities the band chooses to experiment.

The deep, hypnotic, doomy start of As I am Dying gives way to a 3+ minute immense and haunting improvisation on church organ which turns melodic mid-way. The closing Docteur Mago is not very different, albeit not as tight. The exploration journey peaks with the ultimately crazy title track (where, except for the Kore Wa bit, nothing else makes sense according to a Japanese colleague!), where the band goes off-kilter sound- and vocal-wise, clearly influenced by Japanese avant-prog.

There are many very good ideas dotted around Kore Wa! (English= “This is”), where cohesion is not king apart from a few standout tracks; surprisingly though, the whole thing keeps the interest of the listener throughout.

Highlights: As I am Dying and Guzarondan

After a ten-year hiatus, the Norwegian supergroup offers us an excellent album. Kore Wa! is technically perfect in sound production as the exotic aesthetics of the artwork are. Beautiful tunes intelligently combined with distinctive avant-prog shades, rhythmic passages and smart changes make the tracks quite accessible in a delightful way. The sound is clear and condensed with special emphasis on keys as symphonic layers intensify dynamics at key points and simultaneously retain a balance. Feeling is not absent, with delicate features as these are attributed to vocal harmonies, flute and atmospheric parts. Well-structured compositions in no way do they restrict the imagination of musicians, even though the result sounds compact and thoughtful note to note. The fact that two members of Panzerpappa participate definitely plays a role, but there are only slight similarities. Seven wonderful compositions of which those that stand out are the paranoidly playful Kore Wa! and As I Am Dying with vocal lines reminiscent of Gentle Giant. The open-minded listener will enjoy an album that is modern, full of substance and exuberance.