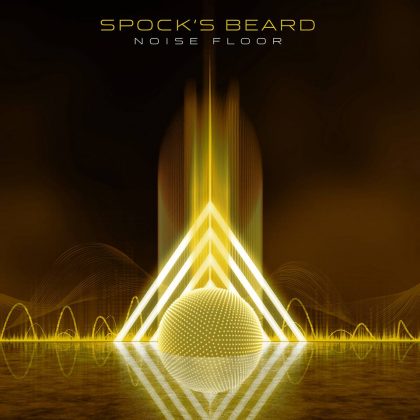 Especially when we refer to bands whose formation is remembered as if it was yesterday, the sense of the time passed is much more strongly felt. In 1992, when brothers Neal and Alan Morse formed Spock’s Beard along with John Ballard (replaced by bassist Dave Meros) and Nick D’Virgilio, all signs were on their side. Being Mike Portnoy’s favorite new progressive rock band, the band from LA represented the modern face of a sound that was revived in a very healthy way.

This year, the band’s 13th album was released under very different conditions, although Alan Morse, Dave Meros, Nick D’Virgilio, Ryo Okumoto and Ted Leonard are here to prove they have still much to offer.

Part of this review was written after I listened to the new Dream Theater song, which unfortunately confirms once more a rule that follows many bands which are tagged as “progressive”. The new album of Spock’s Beard, entitled Noise Floor, was released this year just for the sake of it, without adding anything to the band’s music, or the prog scene or music in general. A recording career which now lists 13 albums, sadly offers emotions rarer and rarer.

When the self-released X was released back in 2010, which was a pretty decent album, we had really enjoyed Spock’s Beard. In 2013 it was Brief Nocturnes and Dreamless Sleep which even though had its moments, overall it did not excite us, but we let it ride. But The Oblivion Particle, a mere two years later, confirmed our fears of a qualitative decline, with the album being the worst in their career until then. And this year they surpass themselves with Noise Floor. Unfortunately, this is a stop-gag album that after repeated listens does not manage to convey any emotion to the listener. And by saying nothing, I don’t mean the searing solos, the technical skills of the band members and so on. These are exalted each and every time, they are important, but let’s face it: they are not enough. It requires a minimum of good songs with features that can attract your interest. And regarding that matter, none of the eight songs the band came up with can do it.

Let’s take an example. What Happens of Me is a typical, rather easy composition of moderate duration and a pleasant feel. Many small details, 20+1 different transitions, disfigured one after another in a sequence that not only does not maintain a relative consistency but essentially cancels one another. Even if the chorus is enough (which is not bad, indeed), it is certain that the non-existent escalation will force you to skip the track, after some short solos on keys and guitar.

That’s how Spock’s Beard put together a whole album of mediocre compositions: by cramming a lot of themes into the songs without summarizing anything, pretty much like a copy-paste idea process (not necessarily bad ideas, for example in Box of Spiders the synth intro accompanied by the bass is a great way to start a prog composition) that does not help an artist to achieve their main goal: the creation should create emotion.