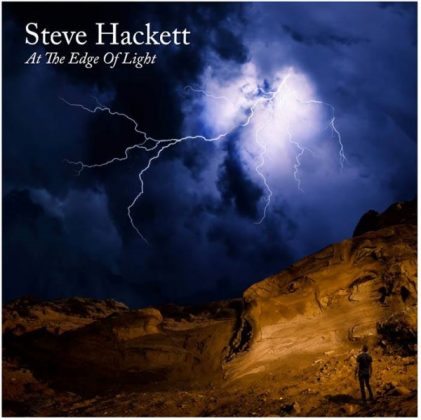 Has the great Steve Hackett to prove anything to anybody in 2019? It’s a rhetorical question since the course he has charted ranks him within the four or five best and more influential progressive rock guitarists. Therefore, no one harbours expectations that his 26th release which goes under the name At the Edge of Light will be a game changer. This is something he has done quite a few times in the past, mostly when he was a Genesis member, but also in his solo albums.

But the interest focuses on the arrangements and, naturally, the guitar work included in there, two fields that the artists himself has set the bar pretty high for a long time now.

Along with a host of guest musicians, the British guitarist unfolds his talent investing all ten compositions with his signature melodic playing. It’s the diversity that stirs the interest in here, for instance Shadow and Flame which is redolent of eastern scales, or Undeground Railroad with the slide-intro that nods to America or the epic with the marching tempo Descent or Conflict which comes within an ace of soundtrack music. The album reeks of beautiful melodies and stunning solos that never wear out the listener; instead they add to the essence of the songs.

The dominant element is, naturally, the classical-like, Renaissance style that permeates most compositions with the 11-minute Those Golden Wings as the most illustrative example which comes closer to the familiar symphonic prog style more than anything else and it is probably the summit of the album. This one along with Beasts In Our Time where Hackett indulges in some uncharacteristic heavy riffing and Under The Eye of the Sun (the way the song kicks in is an obvious nod to the telltale playing of the great bass player and close friend of his, Chris Squire) consist a triad that gets high grades as songs per se aside the great performances.

This is also perhaps the blackest spot of an album that in every other way is decent, meaning that, composition-wise, many reheated ideas are included while, in my book, nobody would take notice if the cheesy Hungry Years was out. On the (very) positive side now, Roger King has done stellar work in the production and arrangements, as well as all-important saxophone, flute, violin, viola and sitar dashes colour the compositions.

As already said, after nearly 50 years of putting out albums, the bet for Steve Hackett is to release albums that honour his name and his course and I deem that At the Edge of Light is one of them. Looking back, it is clear that the solo career of the restless guitarist is on the up during the last decade. Therefore, the true importance of a very good album like At the Edge of Light is that, without introducing something new, it maintains our interest for the ongoing career of Steve Hackett. All in all, how many solo careers of prog musicians are comparable to Mr. Hackett’s?

At the Edge of Light verifies for the umpteenth time that the releases of the solo career of Steve Hackett are characterized by consistency and high level. Naturally, there is nothing groundbreaking something that makes perfect sense for a 69-year-old composer, but the energy that he and his band imprint on vintage prog templates is remarkable. Composition-wise, the songs follow different styles and some of them do take us by surprise like the half-gospel Undeground Railroad, the eastern Shadow and Flame, the something-like-four-and-a-half-minute-pompous/intro/bridge Descent, and the blackest spot of the album, the saccharine, cheesy-nostalgic Hungry Years, that aspires to become a hit single and it sounds dangerously like the equivalent unfortunate moments of Mike Oldfield in the past. Yet, even here and the same goes for all the songs, Hackett’s playing really shines and testifies effortlessly what a great and inspired guitarist he is even up to this day. If At the Edge of Light possessed a more convincing coherence, it could claim a place next to undecaying albums.