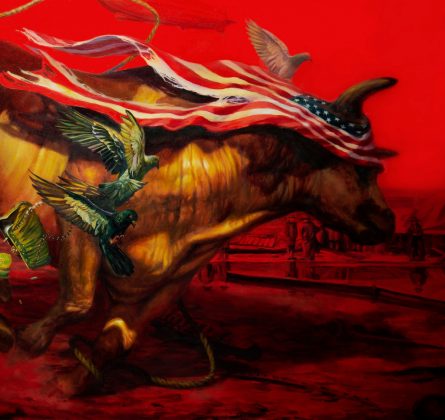 Protest the Hero are very well known, especially since they released Fortress a long time ago, and opened a new chapter for the modern (let’s call it) progressive metal scene. The success of this album partly followed their next two records as it was a measure of comparison (along with their debut album Kezia of course). In any case, the path that Protest the Hero followed was an honest one with steady steps towards another album that will bring them back in the limelight. And Palimpsest is just such an album.

Identity and authenticity: two elements that Protest the Hero continue to hold in their consistent contribution to 21st century prog metal

The truth is that when you see a band coming from Canada, creating music under the umbrella of the progressive sound, then it automatically wins a small bonus of sympathy (for reasons that are unnecessary to mention)! So, 12 years after Fortress put them very dynamically on the world map of prog – in an essentially progressive sense rather than any genre categorization -, and four years after their latest release, the superb EP Pacific Myth, the Canadians are back with a concept album and exploit their undoubted talent to engage with the United States and its diverse socio-political and cultural manifestations. And that is where is the term “palimpsest” is based, which describes American history and its aspects as they have been written and rewritten, one on top of the other and so on, based on the two different manifestations of the contribution of USA, positive, but also negative.

As for the music itself, the two tracks that preceded it as singles of the album, namely The Canary and From the Sky, give a clear first picture of the, once again, diverse direction Protest the Hero follow and build based on different sound references. This is something that has always characterized the Canadians’ amalgam of progressive, metalcore and mathcore. Once more, in Palimpsest the band combines melodic lines based on the vocal performances of Walker (who also had problems with his voice, which delayed the recordings of the album), complex parts that remind of Dillinger Escape Plan a bit, but also a classicish groove among others. In general, Protest the Hero manage to write compositions that sound fresh and thoroughly worked, clicking on their own performing skills and delivering an album that follows their very own way, but also carries what they’ve already acquired as far as possible.

A concept album, a sound that evolves and changes rhythms and moods, but also a classic touch that Protest the Hero leave in each of their albums. There are plenty of prog alternations, extremely virtuosic guitar playing and adventurous orchestrations in all compositions, as well as intense vocals, piano interludes and instrumental parts that restore a more classical prog metal logic.

After the great Scurrilous (2011) and Volition (2013), two of the records that stood out in progressive metal of the last decade, we somewhat lost track of Protest the Hero. Their return this year with the remarkable Palimpsest was a pleasant surprise for the fans of the well-played, modern progressive metal with metalcore and djent elements, but unfortunately, overall it was not a release that excited me. The absence of outstanding compositions (I may be a little unfair to All Hands and The Fireside, which include the most characteristic melodies of the album) and the fact that Rody Walker’s vocals are so loud in the mix in combination with that storm of lyrics, create a rather monotonous feeling in all the songs. The few instrumental parts, which are found mainly at the beginning of the compositions, are considered inadequate and fatally many of the great ideas on the guitars are buried behind Walker’s voice. Someone could say that this was always the approach of the Canadians, but it should be noted that in the previous albums the composition structures were significantly more labyrinthical and the only song that reminded me of this “modern complexity” pattern was the remarkable Gardenias. Protest the Hero are reactivated and seem to maintain their high potential. We wish for a little more risk and successful identification of the real value elements (not the singer).