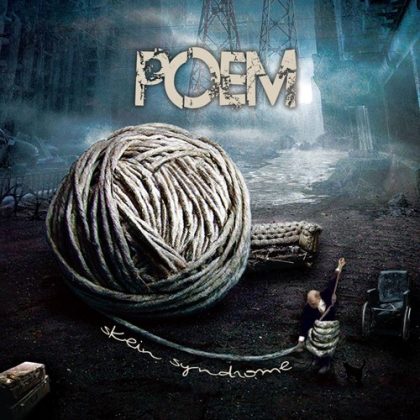 POEM have made a dynamic come-back, seven years after the release of their first album The Great Secret Show, with Skein Syndrome. Since their formation in 2006, the expectations they created at each step were very high and it is not by luck that although their second album was delayed enough to be released, many were those to have been expecting it impatiently. This is of much greater value if we take into account that we are in an era of information overload and high accessibility, where people forget quickly and easily.

The official release from the Swedish ViciSolum Productions is therefore due for the 18th March, while the band already live the dream, as it is on the road in their first European tour with Amorphis, Textures and Omnium Gatherum, making appearances in 38 cities! The recognition at home and abroad is surely something they deserve. After waiting for 7 years for Skein Syndrome, it was totally worth it.

The title of the album makes you wonder what this syndrome is that you had never heard of before (and rightly so, because it doesn’t exist), but the word “skein” in combination with the very successful artwork lead to some conclusions about the topics. Dark, with reflections on the “being” of modern man, the emotional emptiness and the decadence of society. Yet, listening to the album feels good, as it works in a redemptive way, I would say.

The album opens with Passive Observer, a song that the band chose to turn into a video-clip. Good sample for a preview, although the truth is that the tracks are quite different from each other with this particular one having power and melodic passages by which you get hooked. The second track, the powerful Fragments raises the adrenaline, while The End Justifies the Means is probably what most people would like. The love song of the album has an inspired composition and a superb interpretation. The part «the sky is not that grey» (we are keeping that) causes a shudder. Next is Bound Insanity, perhaps the best track for me. Rich with diverse parts, beautiful melodies which are developing and variations from major to minor or vice versa.

Generally, it is of great interest, but the next one, Weakness, is what I think stands out. Catchy choruses and rhythm that gets stuck in your head. The voice tears your soul apart and the drums beat you mercilessly. And basically the song is just what it says: it’s like falling in the river, as such is the feeling it leaves in the end. Next is Desire, which could possibly become the next hit of the band with backing vocalists giving it the necessary touch. The album closes with Remission of Breath, which is interesting mainly from the middle and over and which has several progressive elements.

The influences are many and numerous, from great and beloved bands of the genre such as Opeth, Tool, Porcupine Tree, Pain of Salvation, Katatonia and Karnivool. What I think makes the recipe so successful is that they exactly embody so well the details of the music they  love and the artists they admire, that this comes naturally to their playing. Although we do not hear something original, the result is both so familiar and fresh that when combined with the high level of playing of the members, it makes the whole listening experience take off. Professionalism, tight executions and quality of interpretation are a characteristic of a truly impressive work in the field of domestic metal. The production is good, as it should, the rhythm section is amazing, the guitars sometimes robust and sometimes melodic and the vocals admittedly stand out…

POEM, without hiding their influences, win the bet of their compact assimilation in a wholly tight and rich in detail product. With the weight of the compositions falling in the high technical vocals of G. Procopiou, their range is more than enough to cover a wide range of brain and emotional moods.

Poem: “the night at Kyttaro (15/02) will be full of intensity, passion, energy and a long setlist”