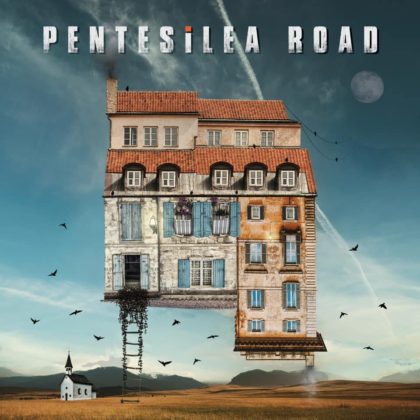 Pentesilea Road is a new band from Italy that plays progressive rock / metal. They come from a country with a long tradition in this genre, and it is certain that the listener expects at least high level of technique and a strong sense of melody. The four Italians with the prominent guest appearances of the great Ray Alder and Mark Zonder and another Italian singer Michele Guaitoli are introduced to us with their debut album. The band’s name is a reference to Pentesilea, the diluted city described in Italo Calvino’s book Invisible Cities.

One of the first things that stand out after listening to the debut of Pentesilea Road is definitely the Vito Mainolfi’s guitar work who plays wonderful lead guitar mainly influenced by Steve Morse, Steve Vai and Guthrie Govan. As one understands, we are talking about a very well-trained and very interesting player who does not insist so much on the shred flashy range of modern guitar but mostly on the skillful part, and really builds magnificent solos.

All songs have been written by Mainolfi and one notices references to Fates Warning and the mid-period of Anathema while they bring Enchant to mind, especially in their less technical parts. You will mainly encounter mid-tempo and slow speeds, without much exaggeration and super-technical parts since Pentesilea Road relies mainly on repetitive melodies wanting to keep tight structures in their compositions, and the truth is that they achieve it to a satisfactory degree. The tracks are really good, Mainolfi’s companions are good although the truth is that in Stains one can notice that the guest singer Guaitoli is much better than Vicenzo Nocerino, the band’s lead vocalist.

Unfortunately for Pentesilea Road, their strongest point is the lead guitar, which I believe should be complementary and highlight the already strong compositions and not support them as much as is done here. Many of the tracks seem to be waiting for the solo to show their full quality and although they’re all beautiful and melodic, they could have been more th thoroughly worked and be more adventurous and surprising.

However, Pentesilea Road’s beautiful crossover prog has no striking bad moments. It is certain that anyone who listens to this record will not be able to say that he/she had a bad time listening to it. Although it has a very long duration, it is very pleasant until the end. At the same time, however, it’s consistently good quality does not make it great, and there’s no track that can act as a hook and make the listener dig deeper to discover other aspects of the album.

As for the prominent guests? I would expect more from such beloved musicians. Ray sounds good in the mid-range vocals but a bit tired at his lowest in the two songs in which he participates (btw Shades of the Night is the better one), while Zonder doesn’t add much (his introduction in Memory Corners is very reminiscent of Aliens by Warlord!).

A good effort by the Italians as a whole that shows that there is yeast for something more important in the future. We will keep them on our radars expecting greater things on the next album that will surely find them more experienced and more ready in songwriting part.

Pentesilea Road is a band that differs from most bands of the Italian prog metal scene (the progressive element comes in addition to the band’s basic sound with the melody being the spearhead of the songs) and that is to their credit. Progressive metal is their primary field, reminiscent of Dream Theater in songs such as Memory Corners and A Tale of Dissidence, while bringing US prog power to mind. The compositions differ from each other, for example Genius Loci has an epic character, while Noble Art has an FWX influence, on the other hand Stains reminds us of Queensrÿche. However, the songs are well done (awesome guitar work), so the whole result maintains its coherence and gives character to the band’s sound. There’s a lot to expect from Pentesilea Road in the future.