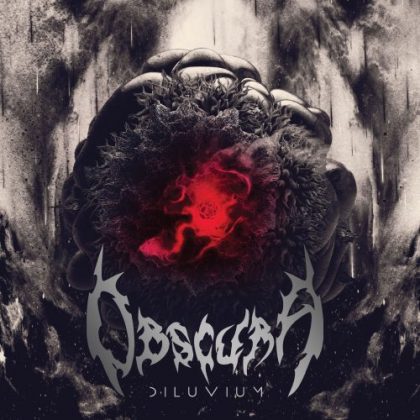 The Germans Obscura are a force rising constantly in the firmament of the extreme/progressive/technical metal and one of the most solid names in the music industry the last ten years. Even though the ¾ of their line-up has changed during their latest outings, the level they operate is still too high. Akróasis had plenty of quality compositions and great moments, nevertheless a big proportion of fans and critics alike saw it skeptically. Obscura decided to go back to the sound that established them, but keeping it accessible at the same time. It sounds oxymoron, but let me elaborate.

The price of a much desired acknowledgement

Diluvium (a term in geology for superficial deposits formed by flood-like operations of water by the way) kicks off at full force and the Germans don’t think twice to flaunt and testify to their technical skills, with the duo at the guitars stealing the show. At the same time though, despite that the parts are intricate, the structures are relatively more conventional. As a result the content is etched easier to mind and flows smoother. But don’t get me wrong, the more complicated patterns are still here, as compositions like An Epilogue to Infinity illustrate. Special mention should be made of the solid and technical bass playing which is emphasized even more by the stellar production. In a few words, the playing is magnificent and impressive. In many parts, Obscura pay homage to Cynic via the successful usage of vocoder (consider Ethereal Skies), something they have also used in the past. There is no other way actually since Death and Cynic are the bedrock of Obscura’s music and they are influences that a careful listener will notice. Melodic touches are also present like the sublime solo in The Seventh Aeon and overall the band has meticulously taken care of every detail of the arrangement.

Thematically, Diluvium is the final chapter of the concept introduced in Cosmogenesis and showed us around to cosmic chaos, the catalysis of time and the deafening, but simultaneously silent death of the stars, as well as their birth and all of the above are allegorical, philosophical symbolisms about the four (as many as the albums that constitute the concept) recurring facts, namely birth, growth, realization and death. Not your every day topic for song lyrics but adds points to the experience and the character of Obscura.

Points are detracted though given that Obscura went for a tried-and-safe approach and despite that technical-wise is their most accomplished and extreme album to date, it becomes clear that visibility is clearly in the band’s goals with the inevitable consequences. Is this necessarily negative? Not quite, because music is meant to be heard and promoted to wider potential audiences, yet one can’t help but harbour ambitions that a progressive band will break new ground in the current musical style. Even though the fans called for a return to the pre-Akroasis sound, given that they are such accomplished musicians they could have bridged their past with their growth as a band. Instead they came out with something that is carefully worked out, but surprises are thin on the ground and when they do pop up is largely thanks to their impeccable performance and not an outcome of experimentation or an unexpected shift.

So what could someone conclude for Diluvium? It is a worthy release that will please may fans of the extreme sound and sure enough will consolidate the Germans. The competition is particularly intense since Beyond Creation, Rivers of Nihil and Between the Buried and Me among others have also released new albums. In conclusion, the crowning of the Germans as the leaders in this specific style is yet to come, but sure enough they are highly capable and consistent suitors.