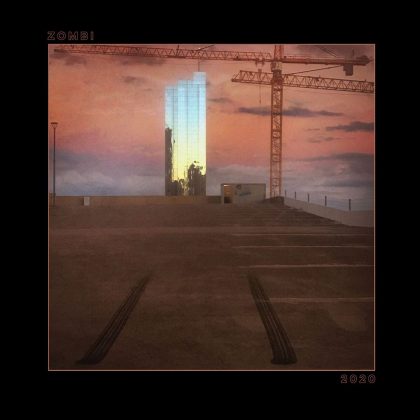 I have always believed that pop culture references in cinema, literature and especially in music, are a trace of an intelligent being, who has a good time with itself while at the same time producing pure art and closing the eye to its aesthetic pleasures. It is in this context that Zombi emerged, coming from the city of steel, Pittsburgh, Pennsylvania. A two-piece band with great releases, which combines a huge love for Argento’s movies and the music of Goblin of course, as well as Carpenter’s films and underrated composers such as Fabio Frizzi, especially his collaboration with Lucio Fulci (Zombie 2, City of the Living Dead). This retro-synth pattern was spread on a prog rock canvas, in which the sounds of Genesis and Yes, among others, gave birth to multifaceted sonic shades and beauty.

The sixth full-length album by Zombi, simply tilted 2020, continues from where the excellent Shape Shift had stopped, with the first track of the album, Breakthrough & Conquer (which in my opinion is the best song of the album, miles away from the second), starting the album dynamically and generally having all the necessary elements, with an emphasis on thick guitar sound, a direction foreshadowed by their previous album. And then comes one of the biggest disappointments of this year, at least considering the huge expectations. The record is not exactly bad. But it is completely uninspired. One would expect that after a five-year break / absence, Zombi would have something to say. But synths are in the background, limiting rather than adding to result. And all this for the sake of a riff-oriented album with bulky guitar sound in monotonous, repetitive and sterile patterns.

If I had to write just two words about the album, I would say that it’s cold and stale. When an artist releases an album, no matter how good or bad it is, his/her intention is obvious. What he wanted to say, where he wanted to go. I dare say that Zombi did not know what they wanted to do in 2020. Somewhere in the middle of the album comes a glow from the past, in the form of the song XYZT, with the atmospheric synths merging with the clear prog rock element. But even this expression is lost after a series of uninspired and perhaps monotonous tracks that seem to have sprung from the same source, from the same idea (Family Man, Mountain Ranges, First Flower). It is obvious that the band intends to sound heavier and sink into sludge frequencies, but in the end you feel like you’re lost in scattered ideas that end up nowhere. The album closes with the pleasantly atmospheric and Thoughtforms, a musical spasm of a more glorious past.

To sum up, I repeat and emphasize that the album is not bad by any conventional definition of the word. The production is very good, the performance is good. But it doesn’t have energy and purpose. As if the musical flesh exists but the soul, the identity, they’re not there. If it was a horror movie, it certainly wouldn’t be a giallo movie that Zombi loves so much. But I am very optimistic that they will return, their dynamics have not disappeared. Until then, however…

Five years have passed since the release of Shape Shift and the expectations for the return of the duo from Pittsburg were high. Unfortunately, 2020 turns out to be much worse than expected. Although the album opens dynamically with the good Breakthrough & Conquer, which may not be very impressive, but at least is a complete composition. Beyond that, the listener is confronted with incomplete ideas that do not seem to lead anywhere and themes that never develop and do not justify the existence of some tracks. The atmosphere and the comfort with which Zombi create their unique retro-futuristic sound must of course be noted. But despite the pure space character, the monotonous pattern makes the compositional weakness even clearer. Zombi, being a two-man project, may have always had a DIY mentality. Here, however, despite their honest intentions, the result touches amateurism in its negative sense. The past five years do not in any way justify the 38 minutes of music in 2020, proving that if you don’t have something substantial to say, you should better wait until you do.