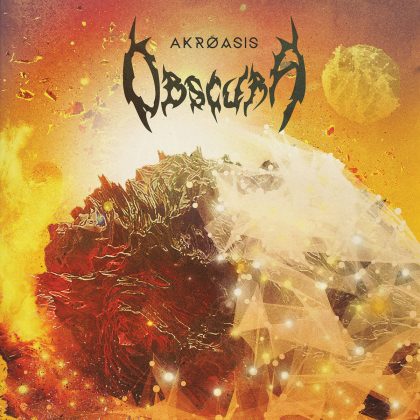 They suddenly appeared on the music scene in 2006, when Suffocation invited them to participate in their European tour. On the same year, they released their self-funded debut Retribution, verifying the hype around their name. The Germans Obscura were not another newly established band, as everything tended in the expectation that something important was about to be born.

The joining to the band of the eminent musicians Hannes Grossmann and Paul Thesseling (former members of Necrophagist and Pestilence respectively) and the signing of a contract with the giant Relapse Records, created the ideal conditions for the band to express its value. The two albums that followed, Omnivium and Cosmogenesis was the effectual outcome of the high expectations: great progressive death metal carrying the echo of the patriarchs of the genre in a way that only a band with undisputed talent could manage, creating thus their personal work.

Akróasis finds Obscura with a renewed line-up, but also with their moral rigid that their future lies before them.

Obscura, in the ears of an uneducated with this kind of music listener, is a death metal band from Germany, named after the corresponding album of Gorguts (Canadian pioneers of the scene). But in the universe of the extreme metal, they are a technical death metal band with progressive element and lyrical concept different from the ordinary, mainly philosophical and no gore at all, as required by the genre. The production is modern, with the drums, in my opinion, being a bit behind and the guitars well ahead, without however affecting the listening negatively. Akróasis is their fourth album, five years after the very good Omnivium, something which is logical and correct, because with demanding genres when you hurry the production, you get more of the same.

In Akróasis the band preserves the essential features of a death metal album, like extreme vocals, the blastbeats on drums and heavy and aggressive riffs on the guitar, but Obscura do not stay on this only since they have melodic guitar solos (in the style of Cynic), fretless bass which attaches a different sound to the band, and atmospheric parts of acoustic or without distortion guitars, with the track of the same name and the 15minute great Weltseele standing out.

Also, the Swedish sound is quite strong in this album with Ten Sepiroth, Sermon of the Seven Suns, Fractal Dimension being characteristic examples of it, since mainstream riffs and staccato playing by the musicians are dominant elements, while the progressive element occurs when there are variations in the rhythm and certain djent parts. Of course, there are The Monist and Ode to the Sun with a more American sound and reminiscent enough of Morbid Angel, with their groove, heavy sound and mid tempo pace, while The Origin of Primal Expression  -reminiscent of Voice of the Soul by Death- is ideal to close the album.

The death metal fan will find in this one hour a lovely album, one of which can rarely be found in recent years in the genre. Modern in sound, with aggressive riffs that stay in your mind and progressive at the same time within the framework of the scene. On the other hand, the average metal and non-listener will become surprised at how different death metal can be, because instead of just storming songs and heavy guitars, there are now more integral compositions. Finally, an Obscura’s fan would rather hear the best album of the band, the one that equally combines melody with American death metal, the one that will reasonably consolidate them as the new big band of the genre.

Akróasis is the proof that the band belongs now to the household names of our time. The Germans are currently the best contemporary progressive death metal band. Cynic, Pestilence and many others find the continuity of their legacy in the face of Obscura, who renew the genre with unique spirit and indomitable creativity.