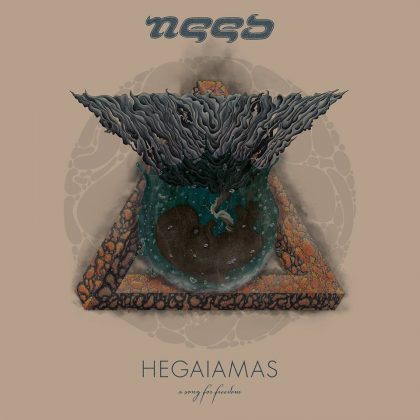 Need have made their presence in discography for more than a decade now, contributing to the dynamics of prog metal at international level. Already on their debut release, The Wisdom Machine (2006), the evidence was more than convincing with the band being introduced in the audience taking enthusiastic reviews worldwide. The amazing Siamese God (2009) showed clearly that the priority of the band was the evolution of their music. Orvam (2014) received dithyrambic reviews certifying the performance of the band that had more and better results. Meanwhile, Need succeeded another significant achievement: the tours with some of the prominent names of the genre (examples include Threshold, Dead Soul Tribe, Symhony X), and the fact that they support concert bands of the range of Iron Maiden, Mastodon etc. and their participation three years ago in ProgPower festival in the US, added to the band experience which is evident in their new album.

The new, fourth album by Need entitled Hegaiamas: A Song for Freedom continues with absolute consistency the tradition of the aforementioned escalating quality. Firstly, one comparison as to the title of their previous album, Orvam: A Song for Home, since it reveals the intention to connect both philosophically and conceptually, the earlier lyrical tendencies of the band with the current concerns.

Under the prism of composition and playing, Need again have gone beyond the limits managing to overcome the excellent Orvam. Without degrading their past, their influences and musical directions, agitate the waters of progressive metal once more. The sound of the album is quite compact with really imaginative orchestration, melodies easily remembered, the guitar riffs vary, sometimes more elaborate, sometimes sharper, while Jon’s vocal interpretations probably the best in his course with the band so far.

To give some explanation to the sound direction of the album, we should draw references from the post-A Pleasant Shade of Gray period by Fates Warning, to Dream Theater, to Engine of Ray Alder, to Nevermore, to One Hour by the Concrete Lake and to the Scarsick period of Pain of Salvation, in the pre-Flow Conception era, to Evergrey and certainly to Symphony X, especially in the last three albums. Moreover, the vocal performances by Jon refer both to Russell Allen, and in the voice of Warrell Dane without meaning that his vocal identity (his interpretation in Therianthorpe is seminar) is absent.

Honorable mention should be made to the guitar invasion and the solos by Ravaya, whose melodies and rhythms converge as much Michael Romeo and Tore Østby, as well as Jeff Loomis and John Petrucci. The collective work should not be overridden against any personalized promotion, so it is emphasized that the album is the result of perfectly synchronized and methodical work.

Epics like the 22-minutes orientalizing Hegaiamas, the stunning heavy Riverthane, or the unprecedented Rememory and Tilikum, consist an aural feast which astonish and enchant with their aesthetics. The prelude of the song Hegaiamas touches the off music artistic pursuits of the band as they promote those needs that exist in the corrosive daily life with the dream of freedom being the compass for freedom and additional concerns as well.

In conclusion, Hegaiamas is both a composite and yet innovative album for the band, as it embodies the culmination of the current progressive metal reality. Ultimately, Need have verified their importance!

The pleasant anticipation surrounding the next project of Need after Orvam didn’t stress the band at all, which in Hegaiamas vindicates the characterizations attributed to it. Less dark than the nightmarish paths of Orvam, the album surprises with its own gravity. Hard riffs that emerge from the introductory Rememory interwoven with melodies in elaborate orchestrations that invaginate creatively the influences of the band. The harsh direction is evident in tracks like Riverthane where we hear thrash riffs and in Tilikum where death vocals coexist with female ones. Hegaiamas is an epic 22- minutes long that invites you on a journey towards freedom from regularity barriers, perhaps the best ever written by the band. At a time when the great of the kind cannot impose their recommendations in the absence of high inspiration, the music of Need lurks the hope for progress.