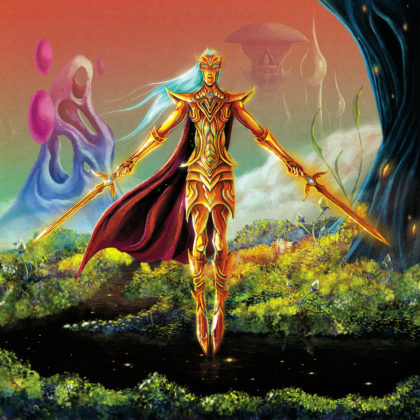 This year, Naxatras had their 10th anniversary as a band. The group from Thessaloniki released its self-titled debut in 2015 and their DIY psychedelic / stoner intentions became immediately clear and thus the band gained a loyal following mainly in Greece. The next two albums, II (2016) and III (2018), established the band in the domestic underground scene and then followed four years without any release. The reason became clear from the first listen of this year’s ambitious album titled… IV, in which Naxatras sound more progressive than ever…

Reaching the top after a change of course

The fourth album of Naxatras will probably be the defining record of the band’s career, since it marks a huge change in their sound and the way they compose their music. The group that shook the waters of the stoner scene, with the psych explorations they applied to their first three releases, is now at the critical limit, not of de-characterizing their psych side. but of fully connecting with the prog rock sound of the 70s. Obviously, there were signs that this would happen to some degree (e.g. the guitar playing on On the Silver Line in III), but few knew or suspected that Naxatras would release one of the best prog records of a local scene that admittedly we can’t say that it gets the acceptance of the Greek audience.

The addition of a fourth member, Pantelis Kargas, on keyboards is immediately noticeable in the opening Reflection (Birth), where the piano fills give a completely different perspective on the basic guitar concept. And despite these extra elements, the guitars continue to be in the center of the Greek band. The seven-minute Omega Madness essentially spreads a palette of riffs that transport us to Eloy’s dreamlands and largely defines the style of the album. Right next to this composition, Journey to Narahmon and The Battle of Crystal Fields are placed, which build a very specific spacy environment (sic) with keys in and virtuoso playing on bass, drums and of course guitar solos. Especially the work that has been done by Yiannis Konstantelias, is one of the best we have heard in recent years from the Greek scene and I think that this playing will win the test of time.

If we had to match IV with another contemporary album, so that a listener would find common codes, it would be Sketches of Brunswick East by King Gizzard & The Lizard Wizard, a top prog rock album from another top psych band. I think that sooner or later, the fans of the group will love it, and despite the change of course the recognition for IV will come, since it does not lag behind any of the categories that a record is usually evaluated. Even the vocals that you hear in The Answer, Ride with Time, Horizon by Konstantelias, while not exciting, do not take away from the vibe of the group at all (perhaps because there is a proper management of vocal abilities, a feature that is not a given for other bands of this genre).

I have to give credit to the band for two more compositions, the funky Radiant Stars, which reminds me of Pink Floyd at their best and the most metal Eloy composition of the record, the wonderful Horizon which also proves that the group has tremendous potential to change and incorporate influences without breaking the flow of the album. There is no doubt that IV is the best album that Naxatras have released, but there are certainly questions about its acceptance by the band’s followers. For those who show patience and listen to the vision of the group, I think that the apotheosis for the songs that we find in here is certain.

After three dynamic attempts, this year’s release of Naxatras from Thessaloniki comes as a final vindication for them and for all those who believed in them from their first release until today. IV opens up much more musical landscapes by removing the stigma of a jam band. Naxatras show us that during all this time without live shows, they let their musical instincts free and added numerous new elements to their music such as keyboards. More psych than ever in their career so far with their sound no longer so hard and dry but enriched with a fresh appetite for creativity. They literally unfold all this knowledge and appetite and we are presented with this great release, an oasis of joy and an opportunity for exploration.

Songs like Ride With Time, Horizon and Battle of Crystal Fields are not released and heard every day. With this release, Naxatras have made a difference with their inspiration and I am certain they’ll thrive in their live shows. A very pleasant surprise in the not so interesting musical year so far.