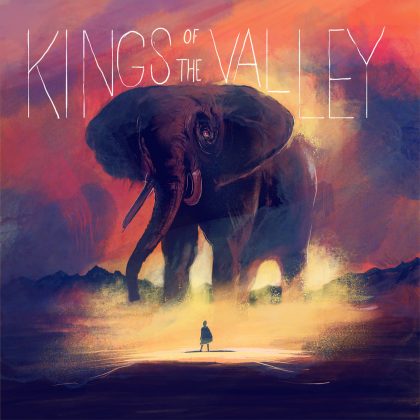 Few people took notice of the EP of Kings of the Valley in 2017, but it is certain that those few appreciated the promises left by the quartet from Norway. They themselves state that they play music characterized by intense guitar riffs, melodic bass, pulsating drums and vocal harmonies. The band’s expression has strong common features with seventies rock, psychedelic rock, good old prog rock and stylish stoner rock.

One of the best debut albums in recent years

The debut album of the Norwegian band from Trondheim comes to break the uncertainty after the second lockdown with its endless lyricism. Taking into account the fact that it is a debut and that it was released during this unprecedented health, social and economic crisis, the self-titled album of Kings of the Valley is a small miracle.

Without introductions, without fanfares and without unnecessary bullshit, the album is opens with a masterpiece: At the Gate. The track is a paradigm of how to integrate excellent melodic vocal lines, even using more pop forms, in a riff-oriented prog rock feast. The band knows what and how to do it, it has an incomparable maturity – rare for a debut album – and it achieves something that few, very well-known in the genre have achieved. That is, to combine sophisticated music and sound progressive and at the same time to be easily accessible by any listener.

After this dynamite comes the much calmer ten-minute The Golden Shore which completely changes the style and atmosphere in such a way that I initially felt confused. But after listening to it again, I surrendered to its transcendental, ethereal character, with these awesome sweet laid-back melodies, harmonizing vocals, and prog rock outbursts. After the middle of the piece comes an impressive stylistic change, which is marked by the piano and leads to an atmospheric climax with haunting vocals that so happily reminded me of the masterpieces of Crosby, Stills, Nash & Young.

Living by Default is the first video clip of the band. An excellent rocker, characterized by atmospheric vocals, an element in which Kings of the Valley have excelled. And they know it. This is followed by Not Alone (lasting almost 13 minutes), which launches the record into stratosphere. Psychedelic visions, an ocean of lyricism, vocal melodies that lure you into nostalgic memories and melancholic murmurs that end in a unique psychedelic climax. The album closes with Peace, which has the same atmospheric style and leaves the listener with a sweet aftertaste and tranquility, a serene ending to this wonderful journey.

The band’s influences include the excellent Norwegian scene as they themselves mention (Motorpsycho of course, Elder etc.), King Crimson and generally there is a sweet combination of various 70s rock sounds (but also folk as mentioned above), from prog to stoner rock and psychedelia. But the main thing is that they never cease to sound modern, convincing that they have something fresh to say. It’s just that in order to achieve that they step on the backs of giants of the glorious past.

Almost everything that produces critical speech is semantically trapped in the suffocating dipole of positive-negative elements. This cannot be applied here. There are no negative things to say, there are no weak points in this sonic construction and its effortless flow. Could it be longer, with more compositions? Maybe, maybe not. If someone wants to listen to something really beautiful that will color the dullness of the upcoming winter, this has no significance.

From the first listening it becomes clear that the five tracks of the album were written during endless jamming sessions. The flow and alternation of ideas and themes is exciting and original. That is because the ingredients are not exactly ordinary, and on the other hand because the style is quite different on the two sides of the album. The amazing At the Gate and Living by Default are the shortest and most direct rock tracks, with references to 70s prog and heavy rock, the aggressive riffing of Motorpsycho and stoner rock, while the exciting epic The Golden Shore confirms the band’s love for Uriah Heep and Camel. On the second side, however, things change a lot, with Not Alone sounding closer to the psychedelic side of Porcupine Tree in the 90s and Hawkwind’s space rock, while Peace closes the album atmospherically without though reaching the level of the previous tracks.

The energy, the great vocal lines, the impressively high compositional level and this unique mix of influences make Kings of the Valley special. Overall, this is an impressive debut by a band that already has our attention.

Airbag – A Day at the Βeach

Monday June 29th, 2020 Νέες Κυκλοφoρίες Comments Off on Airbag – A Day at the Βeach