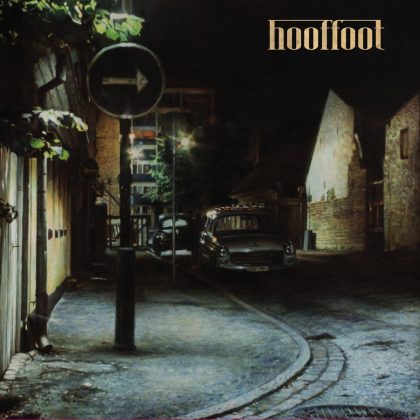 Hooffoot’s debut album was one of the biggest and most pleasant surprises during the decade that’ll end in just a few days. Hooffoot (our reviews here) came almost out of nowhere and was relatively easily named album of the year by Progrocks.gr editors in 2015 (click). Mikael Ödesjö was the connecting link of the (then) new band with Agusa in a style that differed mainly beacause jazz-rock / fusion was a key component of Hooffoot’s instrumental music that made it comparatively more technically demanding.

The Lights in the Aisle Will Guide You was released a few days ago and of course we couldn’t be more interested. The band is now a quartet (Ödesjö is no longer in the band) and the question that arises is just this: can Hooffoot’s second album be compared to their already historic debut?

The oil painting by Thomas Strömdahl (period 1976-79) on the cover predisposes the listener to the record’s extremely mysterious musical content. Although not a concept album, the band states that The Lights in the Aisle Will Guide You is about navigating a world in flux, as if you were reading a 1976-1979 spy novel and you want to find out where it is all heading. The selection of cover art was made by keyboardist Bengt Wahlgren who was looking for an image with connection to Hooffoot’s home town Malmö, and when he saw Strömdahl’s painting the choice was easy. In a style referred to as super-realism, it portrays a street only one block away from Wahlgren’s home.

This wonderful story finds ideal continuation in the four tracks on the album, which Strömdahl himself loved, as he was reminded of the music he was listening to when he worked on the painting that adorns The Lights in the Aisle Will Guide You. The 13-minute title track that opens the album summarizes all the aforementioned links perfectly. The band’s sound remains stubbornly based on the ’70s, bringing together some of the most beautiful features of Scandinavian progressive rock of that time. Prog rock, jazz-rock, fusion and folk are once again amazingly combined and the performance of the four members proves to be at the cutting edge of modern prog. Jönsson’s guitar phrases are simply magical, Pär Hallgren’s (bass) and Jacob Hamilton’s (drums) groove is gripping, Bengt Wahlgren weaves a fusion-style atmosphere, while guest Ida Karson’s saxophone on the heaviest track on the album was a wise addition.

Gustaf Sörnmo’s (guest musician) trumpet introduces us to the extremely mysterious and atmospheric Pablo Octavio – 1st departure. The build-up and development from the middle on are just riveting, balancing prog and jazz with wind instruments as the catalysts once more. Pablo Octavio – 7th sea stylistically stands somewhere in the middle between the first two tracks, with great solos, theme change and an “expensive” basic phrase. The album ends with Krematorium (Arrival for autocrats), the longest track on the album and one of the most exciting tracks in the year. Maybe this is the part where the new character of the band is fully revealed. Despite the suspicion of references to Secret Oyster, Wigwam, Fläsket Brinner and many many other 70s of Scandinavia and not only, Hooffoot’s style here is very personal and just adorable.

Where many prog bands fail, Hooffoot triumph. The expressive pluralism, the smoothness of changes and the flawless orchestration (other guest musicians: Göran Abelli – trombone, Samuel Lundström – violin, Johannes Tärk – percussion) are simply rare. In answering the original question, it’s really hard to tell which of the two Hooffoot albums is the best. That alone is enough to make The Lights in the Aisle Will Guide You a future classic.

Great joy for the few devoted listeners of the dear Swedes. The great impressions of the 2015 debut album, one of the best albums of the decade and one of the best debut albums of the last twenty years, despite the five-year span, are still fresh, as this material is re-approached with the same awe. So, a new full-length album, with a cover of realistic visuals and the auspicious title The Lights in the Aisle Will Guide You. Here they re-approach jazz prog / fusion of the ’70s, but this time even more clearly and accurately. This Soft Machine-meets-Zappa-meets-Nucleus-meets-Miles Davis jamming link is still present. The monumental (middle) eastern endings of the title track and its dreamy guitar and keyboard melodies make it a jazzy prog gem, while Pablo Octavio – 1st Exit blooms due to Ida Karlsson on saxophone. The idle jazz vapors in Pablo Octavio – 7th sea levitate endlessly in the ether of the ’70s, while Jönsson’s guitar is superb in Krematorium Jocke. The word masterpiece sums up all the above.