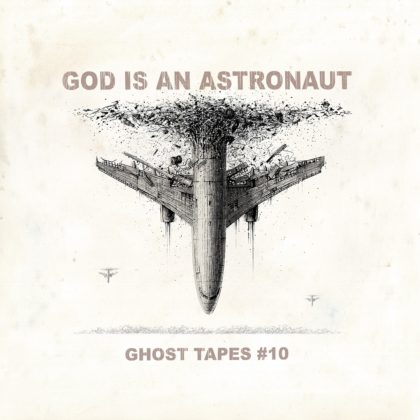 The Irish God Is An Astronaut is one of the second-third generation bands of the genre that was ambiguously and obscurely named post-rock. What sets them apart from other post-rock bands is their ability to set up such small melodic textures, almost vignettes of guitar and keyboard – almost electronic – patterns, but also epic, long compositions, which are successful through the intelligible, catchy and “shiny” form and development. The highlight of their cinematic, mostly organic, instrumental recipe, is their first three LPs, The End of the Beginning, All is Violent All is Bright and Far from Refuge. The subsequent albums took them to some rather weak and less adventurous paths, until 2018’s Epitaph, which renewed our interest in them, with a flexible and balanced management of its expansions and lyrically gentle music. Entering the new decade, the quartet has released Ghost Tapes # 10 through Napalm Records.

With nearly two decades of creativity as a whole and given what they have released to date, God Is An Astronaut seems to have two choices to follow to successfully direct their new endeavor. On the one hand, they could visit the inspirational days of their first three records and recreate, embellish the moments that defined them with a fresh look and ingredients that would create new lures. On the other hand, with the prospect of a new beginning, they could lay the foundations for the formation of an identity that would not be strongly and predominantly reminiscent of their past, but would put it at the service of their new music.

Between these two roads, the band from the west Irish coast of Glen of Downs seems to follow a… third one. Many of the advantages of their melodicity, which were based on both the guitar “stretches” with delay and reverb as well as the minor key reflections in spacious orchestrations, do not dominate here. However, they do not disappear, but become one with the compact and rugged material of white noise discharges. Τhe clean pedal sonic layers have receded, almost vanished, in favor the severity and the burr of thick, heavy guitars. The rock component is preceded by the characterization heavy and in some cases the post prefix can be followed by the term metal. Adrift and Burial arrays represent this turn in the sound of God Is An Astronaut.

Among other things, a cosmic breath is located between the supernova outbursts, and finds its place either with electronic bridges and melodic clearings (Fade, Barren Trees and In Flux) or within the prominent guitar delirium (Adrift, Burial, Specters). This breath is also present in Luminous Waves, the simplest, and one of the most sensuous tracks of the album, in which we enjoy delicate cello sound.

Listening once again to Ghost Tapes # 10, I would say that I mainly miss a more guiding or – why not – prominent presence of the bass, but also the feeling that despite its many and apparent beauties and peculiarities here there, overall the album does not reveal something shockingly unique.

Since the explosion of the post-rock movement in the early 00’s, God Is An Astronaut has been one of the most promising bands of the genre, as their talent, inspiration and expressive range have always impressed and made them stand out in an annoyingly indistinguishable set of bands. 19 whole years after their debut, their new full-length album continues on the heavy road of Epitaph, but clearly investing more in significantly heavier, proggy guitar playing and odd time signatures that give a sense of adventure, which sounds necessary in their instrumental music characterized by style and mood stability, a trademark of the Irish through all these years. Ghost Tapes # 10 is enjoyable, the class and the lively feel of the band guarantee this and overall it is probably their best album after their first four albums. However, as long as they remain within the limits of post-rock, the predictable post-rock recipe will continue to be a limiting factor with those patiently building climaxes and not-so-spontaneous outbursts.