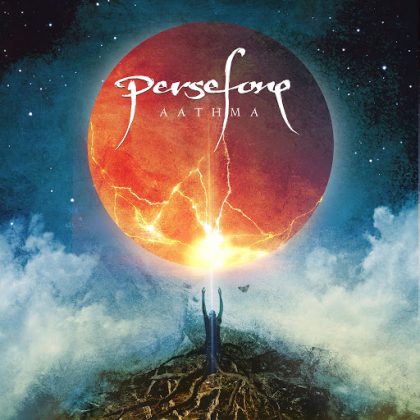 Andorra, this small country with the highest life expectancy in the world located between Spain and France, is known for its tobacco production but not for its progressive death metal. Persefone, based on their previous projects and their consistency in the genre, are a whole scene by themselves. Now matured with the experience of five complete musical works, they dynamically return to the spotlight with Aathma.

The special title of this album refers to something ethereal, spiritual, mystically philosophical and esoteric as witnessed by the lyrics of their songs. Having as mentors the philosophy of Cynic musically and lyrically, they deliver a very well played progressive extreme metal. In Aathma there is the participation of Paul Masvidal (Cynic, ex-Gordian Knot) in two compositions (An Infinitesmal Spark which is a prelude actually and Living Waves) which would have made him proud if included in an album by Cynic, especially after the disappointment of their most recent work. The happy part is that the rest of the musical content of the album is worth your attention. In an hour approximately that Aathma lasts, those of you who are not familiar with the music of Persefone, you will hear technical aptitude, complex orchestrations, special emphasis on complex but easy to listen riffs and of course the integration of the heavy legacy of Cynic, in points of Atheist and generally renowned bands of progressive death metal.

Personally, I was impressed by the musical pluralism in the guitar themes and their performance. The speed, the melody, the structure of the songs in terms of guitar technique and the placement of lead points is exemplary. As a result, the greatest and most ambitious compositions manage to keep our interest undiminished and they are not at all tiring after repeated hearings. I was even able to distinguish references to Nevermore in the sound of guitars. The highlight of the album is the title twenty-minute track that rightly the creators decided to split into four sections. The whole music of Persefone is summarized here, the speed, the roughness, the virtuoso skills, the ethereal keys, the frequent changes in rhythm, the part of clear but also extreme vocals (both kinds of vocals are decent, but in no case superb) and the mysterious character their music conveys. Another advantage of Aathma is how it manages to travel the listener to its sonic landscapes without presenting a distinct bending point.

The objections one might have are relevant to the bass, as while it is clear, it does not have the characteristic sound, nor does it take enough initiatives as in bands with similar sound, but also with the production and mixing which although they are not poor, however the outcome could be bulkier or clearer in parts. Additionally, although the guitar work is an advantage, it seems that much stress has been put on them at the expense of the other instruments. Finally, although Persefone have their own musical identity, their love for Cynic is maybe a little more obvious than it should, and probably they will hardly satisfy fans of progressive rock (unlike their mentors). If they tried to incorporate more atmospheric parts and cut down a bit on speed, perhaps we would be talking about a complete release.

But what should one say about Aathma? My opinion is that this is a quality and interesting prog death metal album, with a beginning, middle and ending. An extreme metal brainchild of the extreme era of Cynic, with clear guitar orientation, involving the weaknesses of extremity and orientation.

With Spiritual Migration, Persefone acquired the fame they sought and in Aathma they continue on the same path where their progressive death metal is embellished with atmospheric oriental melodies. The album in several parts is reminiscent of Cynic of the last period (this is not a good thing though) but in their most lengthy parts, since generally they follow the basics of the genre, that is many solos and technical parts which do not add anything to the songs. The production is perfect and the playing of the musicians masterly, but the alternation of clear and extreme vocals does not help the final result mainly because the extreme ones are not of high quality. Some tracks like Prison Skin, No Faced Mindless and the title track stand out, but the rest fall short in quality. Persefone, especially after the artistic turn of Opeth, had the chance to become the new big name in the field of progressive death metal, but with Aathma they do not seem to seize this opportunity.