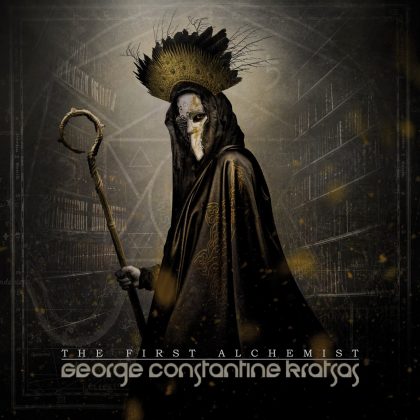 George Constantine Kratsas belongs to the new generation of djent / prog metal shredder guitarists, having his own style that combines very heavy riffs, unique melodies and fast solos, in complex structures and constant rhythm changes. His solo career began in 2014 with Abducted Cosmos and last year he released Overture Omega.

This year’s The First Alchemist is undoubtedly the most ambitious step in the career of the 8-string guitarist to date, which was also released in an orchestral version under the title Alchemical Symphony.

When alchemies give birth to nuggets of gold

Writing reviews on instrumental albums is certainly very difficult but also more exciting as the lyrics are absent, because music is the only vehicle to excite the imagination. The question is whether George Konstantinos Kratsas can captivate us with his music.

So let me tell you the story I imagined after listening to Mr. Kratsas’ music. The alchemist in our story wanders in a sandy landscape driven by the power of the will to reveal the secrets of the wise which are kept in a secret archive. The oriental sounds of folk tradition accompanied by the oud blow like winds of quest and the enigmatic curiosity of the alchemist translates into occasional double bass drumming by Nikitas Mandolas, as well as atmospheric orchestrations. The alchemist, however, fascinated by the search for truth and the awe of the potential discovery of ancient secrets, tries to achieve his goal in any way, even with his dark means. The 8-string guitar with its orgiastic distorted sound and the djent elements that dominate the contemporary metal scene, describes the agitation of the materials and the flame in the eyes of the alchemist. However, his search knows no boundaries and he dares to defy the Supreme Council by awakening the relentless giant of time, who is sworn and doomed to protect the secrets. The sounds of the keys resonate like the hands of a clock and the agony is expressed through the voice of Mora (Dimlight), in the sole vocal point of the record, before we are led to a cataclysmic event. How else could a deluge be captured, if not by a storm of solos and unparalleled technique driven by high speeds and frequent mood swings? A compositional pandemonium that is perhaps the pinnacle of the story. Only an ark could save the protagonist from the flood, and thus he embarks on it amidst riffs and drumbeats, continuing his adventure and giving us two impressive and inextricably linked compositions (Cataclysm and The Ark of the Covenant); a guitar delirium that will be remembered. The album has a certain traditional aura, and many oriental melodies are wrapped around each other like threads, the yarn that will lead the alchemist out of the cataclysmic events, to the coveted hidden archives. Reading them unfolds the knowledge, a grand event imprinted in playful and yet epic rhythms, assisted by the orchestra and somewhere there this short journey ends. I would personally like to hear more and learn the consequences of revealing those lost scripts. The album lasts less than half an hour, and the stylistic signature of Mr. Kratsas leaves us wondering what different end this album could have: a compositionally and executively flawless album, which does not peak as we’d expect.

If you did not like my story, my imagination is probably stagnant, but Mr. Kratsas’ musical imagination is inexhaustible. Do not ignore such a fresh and lively progressive record, a product of a guitar alchemist.

George Constantine Kratsas was an absolutely new name for me in the world of metal guitar before hearing The First Alchemist. I always have prejudices about the instrumental guitar albums made by the new players, and it’s not easy to connect myself with them.  After hearing the album for the first time I was impressed with his technical abilities, his shredding style, and George’s composing talent to make heavy and proggy songs with symphonic / orchestral background, but they are more progressive and avant-garde than most of the music I’ve heard in recent times. His ability for creating interesting pieces with an unusual blend of djent riffing and orchestral sound amazed me. The parade of influences on the riffs (there is no trace of copying), multi-layered structures, and successive alternations of rhythms with perfect flow and clarity makes him somehow unique among the new players. In many ways, this is the most futuristic album I’ve heard this year so far. I hope George will receive the support he deserves.