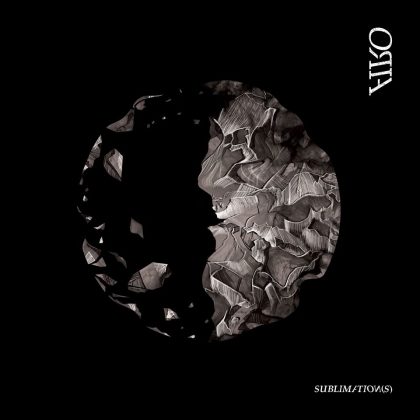 Oria is a progressive groove metal quartet from Thessaloniki, Greece formed in 2018. Their music is a combination of groove metal with contemporary progressive, and Sublimation(s) is their debut full-length album which was released this year. Τhe band comments: “Sublimation is a word that bears two distinct meanings. In chemistry, it is the transition of a solid object directly to its gas phase while in Psychology it is a type of defense mechanism where the negative instincts and impulses are channeled into something positive and creative. Both meanings relate in some way to what this album is about. Metaphorically, in the first sense, it is the way in which we compose our music. It is a disruptive process since we try to deconstruct various musical conventions and experiment with structure, odd time signatures, ‘weird’ polyrhythms etc while at the same time trying to make it listenable and accessible. In the second sense, our lyrics are quite often negatively charged, addressing very difficult subject matters but are channeled through the music in such a way that at least we consider it as beautiful.”

The first two singles and videos (Cope, The Demon Beside my Bed) were an enjoyable taste of the album and a strong indication that Oria have high aspirations for the future.

I had never heard of Oria from Thessaloniki before, and when I read that this is a quartet that describes itself as a groove metal band with a progressive element, I looked forward to listening to their music, because no matter how you do it, the mix of these genres is difficult and very interesting. The truth is that whatever they do, Oria do it with passion and professionalism. Their sound is clear and loud, i.e. just great for the music they play. Indeed, the groove element is very strong and the rhythm section plays a leading role in their music, but special mention should be made of the guitar playing, which goes beyond the typical repetitive rhythmic pattern, combining lead parts and riffs in a continuous play with time signatures, followed by the other instruments. This alternation of rhythms (polyrythmics) brings djent bands to mind. They remind me a bit of Monument, but this is rather secondary. I would rather say that they are kind of a version of Gojira, but significantly less death metal than the French.

The fact that all four band members are equally good, high level musicians certainly works in their favor, since songs like Template of Nothingness, Flisvus and Blame Yourselves are not easy to compose and perform. Great riffs, alternating rhythms, a mix of clear and extreme vocals, technical drumming, and melancholic prog mood, all blend together into something original. Besides, the way they combine their groovy / heavy ideas with atmospheric points in Limitless Insanity and The Demon Beside my Bed show that there is a certain dynamic for something special that goes way beyond the underground scene. I found Cope and Fed to the Wrong a bit uneven, but they are not enough to spoil the uniformity and consistency of the album. Violated is my favorite song of the album, and I think it could be included in the discography of a huge band (let’s say… Gojira), which proves that Oria can achieve great things. However, this is my first objection: in some places the influence is so strong that the band’s personal style is lost. At times (e.g. the song Regret the Fall) I feel like listening to a tribute album to Gojira though none of their songs are played. My second objection has to do with the vocals, which I think have not found a style of their own yet and do not have the same dynamics as the music.

In general, Sublimation(s) is a not a grounbreaking release, but does not leave you indifferent either. It is a good modern album from a band with a perspective for something bigger. All it takes is perseverance and hard work, and I believe they’ll do great in the future.

The debut album Sublimation(s) of the Greek band Oria tries to make a statement pretty early. With groove being the driving force behind all their songs, they deliver a complex but rather straightforward progressive death metal. Avid lovers of Gojira, Oria are setting a precedent to put themselves on the map and the playlists of the fans that love heavy riffs intertwined with melodic passages that give you a breather and make you get lost in the flow of the album. Each musician is performing splendidly in the album with the bass being the instrument that keeps everything grounded and sharp. Where the talent of the band really shines is when they inject more of themselves in the songwriting and infuse the heavily Gojira influenced sound with different aspects. A great example of this is The Demon Beside My Bed with great strained vocals that create a dark, introspective, and sinister atmosphere. More of that please. It is weird to state that even though the album flows quite well, it seems like the second half has more memorable moments than the first. Blame Yourselves is another one of those songs that is infused with more 70s vibes to contrast the moments of progressive “madness”. A very good start for Oria from Thessaloniki who will definitely be on our radar from now on.