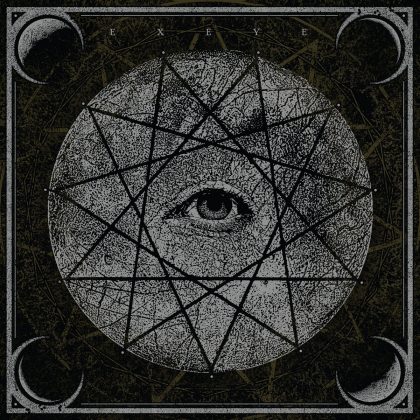 The debut of Ex Eye is one of the very pleasant surprises recently offered to us by a big record label such as Relapse. Ex Eye’s music is instrumental, guided by Colin Stetson’s saxophone, and their predominant feature is experimenting in a (post) metal frame. Artistically, the music of the quartet is indeed original to some extent and deserves the attention of the friends of progressive sound. We will be lucky to see them perform live in Athens on the stage of Gagarin 205 on November 3rd.

The use of saxophone in “extreme” music may not be innovative, but the correct placement of the particular wind instrument on rock / metal music may offer different dimensions than that of the usual trio of bass, guitar and drums. The debut of Ex Eye falls in this context, a band led by Colin Stetson, a well-known saxophonist in the indie scene with many guest appearances on tracks of Arcade Fire, Tom Waits, Bon Iver and others. With the direction of the music being parallel to instrumental post-metal, mainly due to the structural mood (in other words, huge crescendos after calm fluctuations), we cannot overlook the effort of the musicians to make it ‘difficult’ for the listener.

The opener Xenolith; The Anvil, gives us a summary of the band’s music in its four minutes, though it mainly distracts the listener rather than help him/her suspect what follows. In the rest of the album, the recipe of long compositions is used, without though being 100% successful. With Stetson’s and Greg Fox’s (drums, member of the Liturgy) undisputed skills in first and second spot respectively, they perform ‘robotically’ their complex improvisations, somehow retaining a remarkable harmony while controlling the body of their sound more skillfully than a prima ballerina. Form Constant; The Grid is an excellent example of this description, a song that gained my interest with its abrupt rhythm changes, due to the fact that it abstains from the typical post-metal structure and especially because it reminded me of the most experimental and extreme work of the great John Zorn. One of the most peculiar things in the album, however, is the existence of a bonus track, entitled Ten Crowns? The Corruptor, which steals the show with its delicate, jazzy elements and its continuously slowing pace, which points to the best funeral doom moments I have heard over the last several years.

If there’s something Ex Eye could possibly change in their music, it could definitely be the use of the guitar, which has a secondary role and just fills the soundscapes with post-metal colors (sic). A higher contribution by the guitar would be desirable so that the whole does not tire the listener at all. Of course that’s minor, since the music you find on Ex Eye’s debut can stand by itself at the highest level of aesthetics of those who are able to digest the strangest and most difficult metal sounds.

The marriage of jazz with metal is nothing new, Zorn has already offered us sensational music, but it’s also never easy and the result may be fatal. Fortunately, this is not the case with Ex Eye, a band which, apart from exceptional musical ideas from well-educated musicians, also has the support of Relapse for the production of its self-titled debut.

The famous experimental saxophonist Colin Stetson strengthens the ensemble since he’s able to enrich even the most melodic parts, and simultaneously blends flawlessly with the rest, offering aggressive and yet flexible instrumental music. The noise elements and extreme drumming increase the intensity with Fox exploding to an unpredictable, non-repetitive result. The vocals are absent, but this is successfully offset by the progressive jazz tones, the dark beats and the experimental black metal narrative encountered in the long songs. It is clear that Ex Eye released an avant-garde album of great skill, creating a sense of liberation to the privacy of the listener.