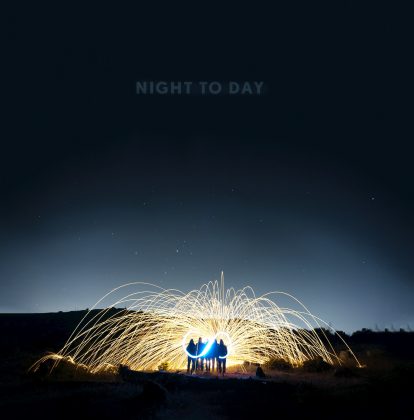 The crossover prog scene that exploded at the beginning of the previous decade has been the ideal creative field for bands with varied, mostly modern, influences related to the alternative rock sound and usually simple song structures -for prog standards- with emphasis on composition and explosive performance. Night to Day, the debut of Time Collapse who come from Athens, Greece is a typical example of this particular sound. A single listen of the album is enough to realize that this quintet has set the bar high.

Time Collapse were formed in Athens at the end of 2014 and, musically speaking, they fit in the modern alternative / prog sound. Their debut sounds like 21st century prog, with direct references basically to Tool and Porcupine Tree, as they themselves mention on their bandcamp page, but also to other bands of the contemporary progressive sound like Riverside and Karnivool. The exceptionally clear, atmospheric production coupled with the band’s performance and the aesthetically unique album cover could easily fit it into the contemporary Australian scene.

Night to Day is clearly divided into two parts, with Time Bound, Time Collapse, Reflecting Lies and the title track being the first one and the Messiah Complex trilogy being the second one. In about 38 minutes, the listener realizes that this is a highly professional work, where the band’s references to Tool and Porcupine Tree are always in the forefront, but without being unnerving or tiring. The vocal lines are perfectly rendered within the Maynard temperament. The guitar layers sound crystal clear and with the right level of distortion, while the rhythm section grooves continuously throughout the album. Last but not least, the intelligent yet key use of the keys gives a distinctive atmospheric touch to the album, sometimes a symphonic, electronic or even post-rock tone, and in combination with the variations in heaviness, sculpts the final result.

Since Time Collapse are a three-year-old band, it would be a blunder to qualify the particular debut as indifferent or innocuous. This is a wonderful album, and the only flaw is that the band moves safely within its influences without having crystallized its own personal stance. In any case, Night to Day sounds very pleasant, while the “danger” of pushing the repeat button is undoubtedly true. The friends of modern progressive sound must definitely give to it the necessary attention, and the band has to make use of the emerging momentum, as it is shown on the last (not accidentally, I guess) tracks of the album (Night to Day, Redemption).

With their debut, Time Collapse offer 40 minutes of tight music and remind us that the progressive sound continues to flourish in Greece. We have said that before -and we should not be surprised anymore- that there are many bands in Greece that release material of high standards. From the very beginning, Night to Day sets the mood with instrumental sounds reminiscent of Tool and Porcupine Tree and on a second level their influences from King Crimson and Rush emerge. With the help of psychedelic passes and wonderful keyboards, the songs give a sense of continuity to the album, simultaneously operating as a break between the heavier and faster parts. The highlight of the album is the title track which provides enough space for each instrument to shine and it is an excellent example of the strong elements of the band. Generally, Night to Day is a very good debut and the future can only be better for the band if they add a more personal element to their very good ideas.

Sunday August 2nd, 2020 News Comments Off on Listen to the first single from the upcoming album of Time Collapse