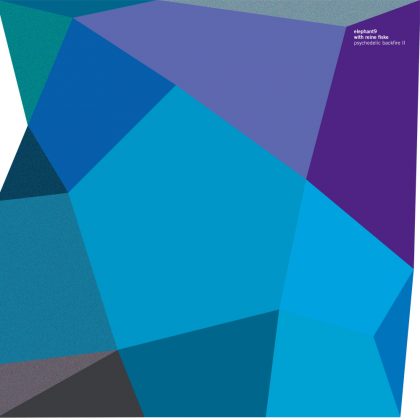 The release of two separate live albums in one year is not the most common choice for a band and as an option it may seem strange to some. However, in the case of Elephant9 such choices are clearly less bold than their own music. Psychedelic Backfire I (our reviews here) has proven that the music of the Norwegians reaches seemingly untouchable heights when played live, confirming their great reputation for their concert performance.

The only difference between Psychedelic Backfire II and the first part is that the band here is a quartet, which is crucial to the result, especially when one considers who the fourth band member is…

If you have any questions about the release of two live albums and especially two parts with the same title, the answer lies in the presence of the great Reine Fiske. The guitarist who was first known as a member of Landberk, Morte Macabre, Paatos and of course his long career with Dungen and Träd, Gräs och Stenar, is not the first time to play in an Elephant9 album. His participation in Atlantis (2012) and Silver Mountain (2015) was more than catalytic for the excellent result, especially in Silver Mountain (my favorite Elephant9 album by the way).

The album opens with You Are the Sunshine of My Life which is the perfect start. Silver Mountain‘s experimental spirit revives ideally here with the band’s energy peaking from the get go. The impression formed immediately relates to Fiske’s remarkable chemistry with the rest, especially with Storløkken, as the two interconnect ideally. This seems even more pronounced in the live version of Skink / Fugl Fønix that was also included in Psychedelic Backfire I, and here comparisons are inevitable. With Fiske present, the band sounds complete and fuller, on the one hand because the Fiske-Storløkken “dialogues” have the rarity of a partnership of two great players and. on the other hand, because the rhythmic part is obviously more enhanced. The same goes for Habanera Rocket from Walk the Nile (2010), which is built on keyboards and guitar. Freedom’s Children (a song from Atlantis), a bright moment of Fiske, is rendered here with a much more explosive character, ideally paired with John Tinnick (written by bassist Nikolai Hængsle Eilertsen, also from Walk The Nile) completing a great live album with the foot on the throttle and Fiske doing a little tribute to Ritchie Blackmore.

It is reasonable to think that the dual version of Elephant9 was initially intended for comparisons, and that is a very bold choice. More so, since these differences reflected the course of the band so far. The important thing is that both parts of Psychedelic Backfire are great and deserve the attention of many more people than those who’ve known the band so far, simply because this is a trio / quartet that leaves no room for lukewarm reactions. However, Fiske’s presence adds elements that are hard to find within the whole progressive and experimental rock field. It’s understandable that numerous obligations make it hard for Elephant9 to be a stable quartet, but each time that happens, rare things like Psychedelic Backfire II take place.

Why the need for a Psychedelic Backfire II, when you already got one? Well, because you can obviously have too much of a good thing sometimes (and there’s even a third installation, available for those lucky souls that have acquired the now out-of-print 5(!) vinyl boxset). In all seriousness, the reason is Reine Fiske, the tasteful Swedish fuzz torturer whose dynamism so glowingly compliments the Norwegian trio sometimes. The interplay between Storløkken and Fiske, on top of that incredible rhythm section, constitutes material that should be taught at music schools. Things get hazier, faster, dirtier and louder – the keyword here is More. Some cuts are featured on both releases and it’s a treat to compare them and thus appreciate the Fiske-coefficient. As a bonus, the band indulges in a total remake of a Stevie Wonder tune, featuring a remarkably psychedelic buildup. So, the question to be made is: when can we expect the release of the third part to the masses?