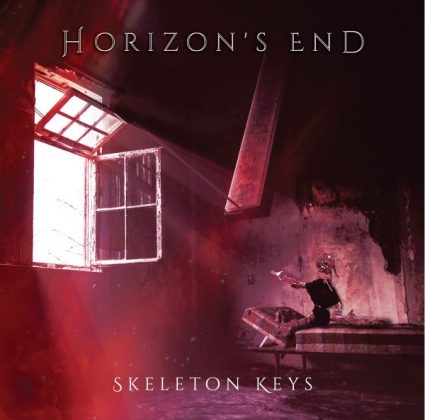 The ‘90s were definitely the golden age of hard progressive music. From the first few years, it managed to radically change the face of music and help progressive music evolve after a period of stagnation.

Before the Greek scene had set sails for international recognition there were some progressive metal bands that even though they didn’t receive the recognition and the attention that they deserved, they gave high standards of songwriting. A spring that unfortunately remained unfinished. One of the bands that stood out in the Greek scene was Horizon’s End with their name come in direct impact with the content of their music being special and documented in only two records, that really opened new horizons.

Many years after their last record, A Concrete Surreal, the band from Thessaloniki is back and won’t back down from the hardships that have gone through. Skeleton Keys is an album that brings the progressive metal of the 90s to the forefront, not as a reflection, but as a necessary continuation of an effort that shouldn’t have stopped so early.

The instrumental Alpha crushes the extended silence from Horizon’s End camp since 2001 and gives a good foretaste for what will follow in more than an hour of music. Forming Fantasies that follows, brings the Italian Eldritch (Headquake and El Niño era) to mind, with the keys intertwining with the bombastic rhythm, before the voice of Vasilis Topalidis makes its appearance. Symphonic elements are added to the track that remind me of another Italian band of that era (if I mention the name Rhapsody would it be improper?). Generally, the atmosphere brings back the best moments of prog / power metal with the technique being hand in hand with the melody and the speed obeying to the melodic requirements.

The Land of Decay continues in the same path. The guitar and keyboards are starring once again with their combination bringing another band from the neighboring country in mind. I think that the influences of early Labyrinth are evident and the feeling of the 90s sound is festively sealed.

The continuation is more melodic, and it brings memories from the first album of the band, the classic Sculptured on Ice. In one point I would swear that the notes belong to the genius of Hadjidakis before a very special guitar solo makes an appearance that will lead to a very technical finale. In Ocean’s Grey one of the best tracks (if not the best) is guiding the inspiration of the album. The influences of Dream Theater are evident in the intro of yet another melodic track that moves between the solemn melancholy and hard riffing. For one more track the band is slowly building a labyrinth of complex music, they know however the way to not lose themselves in it in order to support a song with a beginning, middle and end.

Who’s Afraid of the Big Bad Wolf offers the most easy to remember chorus of the album without deviating from the resultants. Beautiful prog / power that finds the golden section between melody and technique.

The longest track of the album is at the very end. Be extends to almost 23 minutes and it wouldn’t be an exaggeration to state that it concentrates all the best moments from the years that now seem centuries ago. Dream Theater, Symphony X, Fates Warning from the era when their career was building the dream of progressive metal, are now being intertwined by a band that knows how to handle the influences and more importantly leave its own mark on the final result. A song that can be seen as an adventure and can be heard with a great appetite because there are no more bands of an equivalent perception in progressive metal songs. An unforgettable way to end a very nice album.

After almost two decades, Horizon’s End don’t offer us music that would grow the nostalgia for an era that they were also a part of. It is a continuation that is resting the dire process of time and the changes that it brings. Without adding anything new, it sounds fresh. Even though it is not a masterpiece, it still is a very good album. A progressive metal sound of the ‘90s that with a magical and always welcome way is back with us like it never left.

After an absence of 18 years, the legendary Greek prog metallers Horizon’s End have returned with a new album. From the opening instrumental Alpha the band continues in the same direction as in the previous album and delivers top notch prog metal. The album is consistent, with grandiose melodies, beautiful orchestration, great complex instrumental arrangements and performances, tempo changes and variety. The overall atmosphere on this album is very strong and its emotional depth and colours unfold more with every listen. The interplay between all the musicians on this release is breathtaking with each member given ample time to shine. The strong 90s nostalgic vibe is very evident in songs like The Land of Decay and Dreamer’s Hands. The monumental 23 minute long Be is almost on par with the best Dream Theater and Symphony X stuff. Skeleton Keys is for sure one of the most remarkable comebacks during this year. Highly recommended to anyone who appreciates this genre, although non-metal prog fans might also find a few things that will gain their interest.