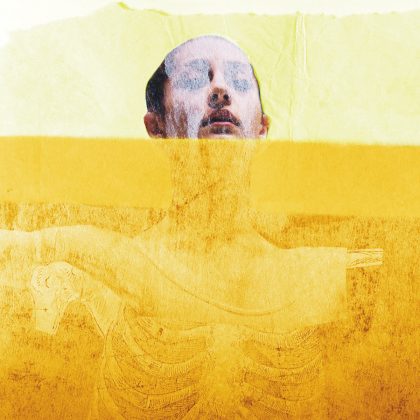 The Tea Club are in business nearly a decade, putting out albums ranging from very good to sublime, portraying their skills and talent. Keeping in step with the times where progressive music digs all the more in the annals of retro aesthetic, they make a statement with their fifth album and reap the fruits of the expectations that they themselves have set, mainly with their two latest albums; and with their new, multicoloured and adventurous album entitled If/When they keep walking the path of progressive complexity, but they also throw in the mix a warmer, more melodic and folk touch that render it solid and it could well be among the top releases of 2019.

The modern wave of bands which earn, or are tagged as such for that matter, to release and promote albums as prog ones is a double-edged sword since on the one hand they play safe because the use of past mentality is quite standard, but on the other hand shuts listeners off, mostly due to the crystallized impression they have acquired from the typical samples that inundate their musical lists.

Now, with regard to The Tea Club and their new album, what seems to consolidate their place as a very worthy group of this new generation are these very elements that maintain the fine balance that If/When possesses: the element of surprise, the memorable melodies, the interesting flaw of the album with changes that depict the intentions and the mentality of the band. The Americans are doing fine on this aspect, pretty much as they did on their earlier albums, but it was Quickly, Quickly, Quickly (2012) where they set their own rules and they fell in step with the era of easy diffusion of internet information and the verdict of those who paid attention to their music.

In a time which is not dominated anymore by household names and their musical directions they opt for, but instead there is space for bands which work silently and stand head and shoulders above the tons of new releases, The Team Club belong to the elite for sure. They leave their imprint on the scene with If/When and they put together a consummate album which carries the aura of the so-called ‘vintage’; vintage, but not obsolete, pompous, but pop, too. Because, as we already said, their secret lies in the balance and the mastery the album is interspersed with, be it compositions like If I Mean When with a Canterburish feeling or Rivermen with the constantly increasing tension, performance and guitar outbreaks. A magnificent composition, very much like the 27-minute epic Creature, which closes the album triumphantly and blends fresh ideas with past recipes, along with the distinct touch of a band which has its way to have a sound of its own. Because yes, Genesis with Peter Gabriel in the fold, for instance, is a group whose influence will never fade, something like a reference in a book. But the personality, the overall approach and, of course, the talent of composing songs that exceed the expectations for “yet another release” with rehashed and predictable ideas are arguments that suffice to render The Tea Club into an A-Grade band that could well lead the developments in the future and blow the listeners away with albums like If/When. An ambitious attempt, probably the best album so far from The Tea Club which is an illustrative example of contemporary prog and will, more than likely, end up as a fulcrum.

Let’s bypass the general impression the new album of The Tea Club leaves and focus on the composition that bookends the album. Creature encapsulates everything the average prog fan longs to get from a 28-minute composition. The lyricism and, above all, the diversity in sounds and ideas are a superb palette for the sonic canvas the Americans draw upon.  Where others simply daub, they build an interesting complex of melodies and it pulls off to pass off as a single, coherent composition and this is definitely the reason that brings If/When in the gulfs of prog music. As for the rest of the album, they go for different approaches and win over the listener without getting too complex, sometimes with the similar voices of McGowan brothers, sometimes with the sophisticated mixture of their 70s influences with the art-pop-prog prog angle that Genesis and Gabriel went for in the 80s. Even though this sonic relationship keeps the group in a subset of cases which finally hardly gain any visibility (although Steven Wilson has fashioned his sound this way, too) I think that compositions like If I Mean When could achieve a relative success courtesy of the lyricism they possess. But the time that a romantic atmosphere appealed to the audience is gone and darkness has taken its place instead. But if you are looking for a pleasant listen, free of elaborate traits, do check out If/When.

The Tea Club release video for ‘If I Mean When’