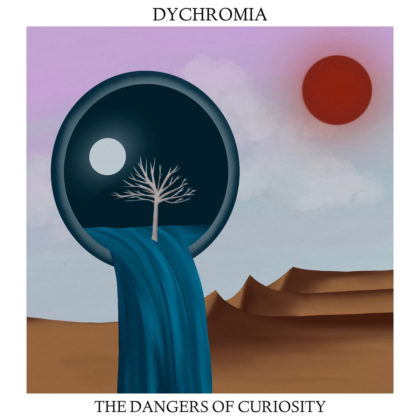 Dychromia are most likely unknown to most of you and probably rightly so as they are releasing their debut album via Bandcamp this year. The trio from Minneapolis, formerly members of Conundrum, consists of Wyatt Andrist on vocals and guitars, Nick Krier on keyboards and bass, and Nate Martin on guitars and percussion. The band plays progressive death metal , and the creative process for The Dangers of Curiosity started in 2019. How did it develop and what awaits us? Read below.

A short but frenetic experience

I’m always excited about debut albums, especially when they deliver music with as much attitude and character as possible within the progressive metal genre. Dychromia really paint their musical canvas with many and not just two colors. It’s noticeable that they jam like Meshuggah, Gojira, The Dillinger Escape Plan and Between the Buried and Me, like any proper extreme progressive band, but they don’t follow them blindly and irrevocably. The technical level is excellent and the polyrhythms are great both in percussion and strings. Since the same person composes both (Nate), their synergy is amazing.

An important element in Dychromia’s music is keyboards, to a greater extent perhaps than bands of the genre and they add interesting layers of content emphasizing the progressive element as can be heard from the opening instrumental Table of Contents. Since we’re in 2022, the production lends the necessary volume and allows the instruments to breathe, although perhaps in some places there is a bit more compression than there should be. But in general it is a polished dynamic result. As correspondingly dynamic and unstoppable are the riffs, the vocals are not as much. Technically they are not particularly careless, but these are very typical extreme vocals which fortunately do not detract from the result but do add to the record which is compositionally free.

Although this is an EP, many good ideas could be transformed into something even more explosive. For example, Window of the Space Below, while running just under six minutes, could easily be 1-2 minutes longer. Of course, someone would say that it depends on how you see it, and many listeners don’t like big compositions, but prog should not be detained, especially when this musical thing is really galloping. All this is evident in the final song, The Value, which extends to 12 minutes and yes, it is massive, it has the groove it needs and its Spastik Ink tricks.

But what topics do Dychromia deal with in the half hour they offer us? They refer to dilemmas, inner chaos and searching through sins, but also explorations of the mind. Even the longest running track The Value follows the same pattern and tells us the transitory journey of an astronaut as he traverses the vast universe and realizes his insignificance.

Combining the point of view with the musical content, does the first effort of Dychromia convince? Definitely yes, it’s a testament to how important Bandcamp is for new artists and how fresh and good new music you can find out there. If they remove the time restrictions on their talent and improve on vocals, we are probably talking about a very promising future.

Dychromia is another band of this modern/technical death metal scene with many influences from prog and djent. The experienced listener will be reminded in places of similar efforts by Beyond Creation, Between The Buried and Me or Black Crown Initiate. So what do we have here? Strong rhythm changes, many technical parts, changes that will sometimes refer to the most classic let’s say tech death and sometimes to their proggier side. The overall work sounds like a band that has been around for years, both from the production side and from the technical progress and boldness they have in the compositional part. The truth is that as a listener I would like something more compact and to see some direction, because maybe the band is trying to do too many things at the same time in short time, losing a bit of vision while I think that in this release I miss a really great song. However, I can’t help but recognize that this is a quality work and a band that automatically enters our radar for the wider extreme prog field.