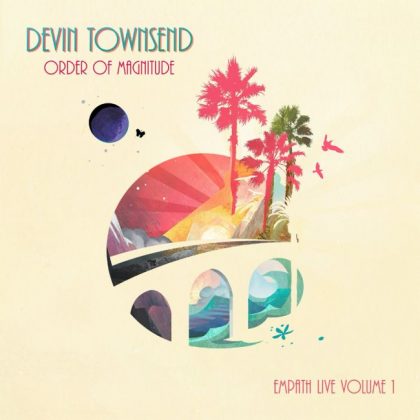 It’s hard to get excited about live albums. Especially in the last decade or so it has been quite easy to just watch a live performance of your favorite band online. However, if someone can get us excited about a live album, it’s definitely Devin Townsend. Maybe it’s the global quarantine that makes us miss concerts, but it’s also Devy’s perfectionism and character or maybe the sheer amount of talent he amassed for this live in London.

Music feast by a genuine performer

I generally do not prefer live albums, let alone review them. But there are cases where the experience is a unique mystagogy (e.g. Pink Floyd – Live in Pompeii) or where a member of the band is born to present his work on stage. Devin Townsend clearly belongs to the second category. He is a very remarkable and criminally underestimated artist with a very expressive sense of humor. What can you say about a man who was trying to raise $10,000,000 in donations to make a rock symphony on penises, vaginas and death…? Devin is really enjoyable, he satirizes his unbridled chatter (Woody Allen type), even though we love it anyway, while he interacts with the audience asking for the teddy bears that his eye has spotted, asks them to make death growls, talks about his hemorrhoids and talks about sex! And all this is addressed to a British audience, which does not have the reputation for tolerating such behavior. One would wonder why I mention all these things and what do they have to do with the music. I believe that what makes a live memorable is the human character, the entity that will differentiate the experience from a studio recording. Therefore one needs to guide and entertain the audience. Devin excels at this.

In terms of music, the sound is very good and of course the performance is as good as one would expect. Of course, not all effects and orchestrations can be heard in a concert, something that one will notice in Genesis, perhaps the craziest song composed by the genius Canadian. However, given the limitations, the performance is staggering. The setlist of Order of Magnitude: Empath Live Volume 1 mainly includes tracks from the recent album Empath, but Townsend also managed to fit in moments from his rich discography, especially honoring Ki (2009), but also albums such as Infinity (1998), Physicist (2000), Accelerated Evolution (2003) and Epicloud (2012), and also played a cover of The Trammps’ Disco Inferno simply because he could. Gato, Deadhead, Why? and Lucky Animals were the most enjoyable songs for me, mainly for the energy they bring out but also the participation of the audience in Devin’s craziness (Why?). Throughout this show, there are four female voices, most notably that of Ché Aimee Dorval, who also plays guitar. In addition, there are two more guitarists, most notably Mike Keneally, known for his collaboration with Joe Satriani, a rhythm section and the necessary keys.

As mentioned above, the performance is impeccable, as one would expect from musicians called to perform Devin’s demanding music. But apart from that, the most important thing is the feeling that a live album should leave you with, which is to hope “I wish I was there too”, and there’s no doubt this one does. This is a very well-played and structured live, one of the best live albums I’ve heard in recent years, so despite my hesitation about live albums, do yourselves a favor and listen to Order of Magnitude: Empath Live Volume 1.

With no hope in sight for concerts in the (near) future, Devin Townsend drops a live album to remind us both what a nice experience concerts were, and how true, raw and charismatic he is. In an effort to produce a more organic and grounded sound he decided to not use any pre-recorded samples. The idea was that the small mistakes and imperfections will make the result more unique. And while I’m sure there might be some imperfections there, the seer amount of talent on stage produces a great result at least to the untrained ear. The setlist is heavily focused on the latest album Empath with enough touches from his earlier Devin Townsend releases as well as a fun cover of Disco Inferno. Devin Townsend combines his kindness, good spirit and creativity very uniquely. Each creative effort has a specific vision which he manages to deliver both because of the very talented musicians he is collaborating with but also because of who he is as person. This live album offers both a live rendition of the songs he has previously released as well as a glimpse of his personality and energy on stage. From that point of view, if you are a fan of Devin Townsend, you’ll know both what to expect and if you’re going to live the album.