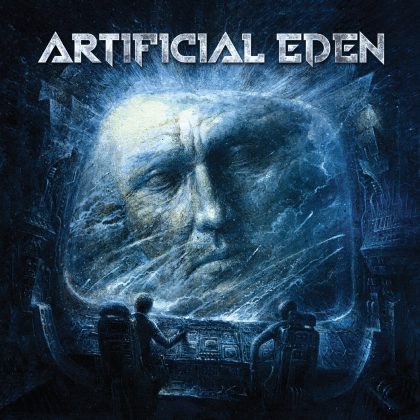 The Greek prog metal band Artificial Eden just released their self-titled debut album through the German label Boersma Records. They were formed in 2002 by guitarists Antonis Panagopoulos and Thanasis Paparidis, and four years later released their first demo in 2006 (initially under the name Quadra which was changed to Artificial Eden due to copyright reasons).

The band plays old school progressive metal which is very close to the 90s style of the genre, but they have also added some modern touches, especially in terms of songwriting. Artificial Eden is a real exception to the contemporary prog metal sound, an investement on the general style that made the genre big about 30 years ago.

The self-titled debut album of Artificial Eden includes six songs, and all of them are generally accessible and memorable prog metal. The musicianship here is great and it’s what really stands out the most. All members are putting in outstanding performances, and there’s no doubt they are obviously superb musicians. Mention has to be particularly given to the singer, Rob Lungren. His performance here is confident and he possesses great skills and the ability to create emotional impact. The guitar sound is clear, sometimes very tehcnical, and very emotional  at the same time. It seems that the great guitar heroes as Satriani and Petrucci were the main sources of inspiration for creating this guitar tone of Antonis Panagopoulos and Thanasis Paparidis.

From the start of the album, it’s pretty obvious that the band is very much influneced by Fates Warning. Emotionally and structurally, Artificial Eden follow the path of Fates in songwriting and performing of the whole material which is presented here. The band knows exactly when to dance the lines between progressive technical showcasing, soft passages of beauty or simply catchy melodies. There’s not even a second of that boring and endless instrumental passages with many uninteresting noodlings like in the late Dream Theater stuff. On the contrary, the band is obviously more concentrated on how to compose a piece, and not just to show off (which, of course, is much easier).

The album’s higlights are Poor Desire, an interesting heavy piece with a great chorus and backing vocals, and Land of Depression which is probably the best track on the album. It starts with haunting keyboard sounds and turns into a mid-tempo piece. It’s apparent that emphasis here is given more on progression, not only on heaviness and emotion. There you can also find some jazz / fusion influenced parts and moments of dynamic changes, featuring heavier or grittier riffs coming in to supplement the calm melodies.

However, the album somehow lacks the magic and stand-out songwriting, and it’s also suffering from a flat production, possibly due to low budget. The debut album of Artificial Eden is not a perfect record, but I  must say that they are better than most contemporary bands in the prog metal zone, and this work is a good starting point for these talented musicians to gain wider recognition in today’s progressive metal community. Very much recommended to all fans of 90s prog metal.

Artificial Eden present their debut self-titled album that balances between hard rock and ‘90s progressive metal. Navigated by an increased sense of melody, they manage to fit their inspiration in small pieces such as the à la Theater Poor Desire, but also in longer compositions, such as Land of Depression. Without playing anything terribly original, they have placed special emphasis on the guitar sector which reallly impresses, but also on the vocal melodies with Rob Lundgren singing beautifully and catchy choruses, as in the title track. Many elements on the album exude the atmosphere of the ’90s to which the band adds heavy riffs and a directness reminiscent of ’80s hard rock. A nice mix that on the one hand creates a feeling of nostalgia and on the other hand gives a relative update of a genre that sounds distant today. Taking into account that this is a debut album, it is certainly a very notable endeavor.