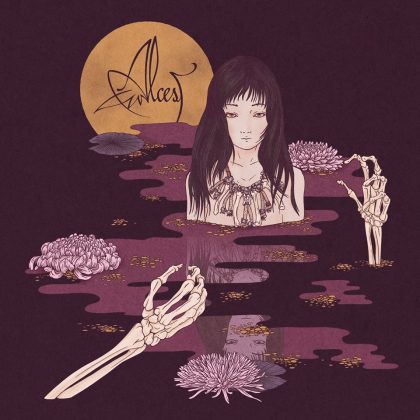 Among the number of Neige’s (aka Stéphane Paut) projects, Alcest standout right off the bat, not only because of their sonic individuality, but also the waves their music made since their debut Souvenirs d’un Autre Monde (2007). The blending of atmospheric black metal with progressive and post-rock resulted in coining the term “blackgaze” that reflects the group’s uniqueness. The band’s next moves after their impressive two first albums were not a step forward, especially the somewhat unfortunate fourth one (Shelter, 2014). Kodama signifies the French’s return to the sound that established them.

The acknowledged musical genius, known as Neige, is back enraged and filled with self-confidence to claim back what the couple of latest releases deprived him of in his short course to the general acknowledgment.  Alcest come back with a benchmark release that puts the train back on the rail, since, in my opinion, stagnation clearly took over after Écailles De Lune. Kodama is a concept album, inspired thematically and artistically by the anime masterpiece Princess Mononoke by Hayao Miyazaki.

To give a clue to those who Alcest hasn’t made the blip on their radar what they sound like, I am not sure if I belittle them by tagging them as “blackgaze” – a term coined for Neige’s music and projects when he released his sublime debut – since what the French is coming up with is an amazingly beautiful, complex and composite mixture, consisting of a wide variety of influences. It is an invulnerable and solid hybrid progressive / post-rock with painless but all-important (for those who make them cringe) black metal touches, through a genuinely authentic 70s atmospheric basis, pulling off to sound nostalgic, but simultaneously progressive, sentimental and romantic yet so powerful.

Technically the compositions are exemplary, Neige’s playing is virtuosic but at the same time simple and easy to get across, his mate’s drumming (Winterhalter) since Écailles De Lune is, I think, by far the most mature of his career, while the fresh air imbued by the bass, which for the first time during recording sessions was taken over by a bassist and not Neige, was revitalizing to a great degree. Neige laid down his tracks once more with his favourite Fender Jazzmaster to recreate this live mood which is a trademark of his studio releases, whereas the production is professional and crystal clear. Arrangment-wise, it truly stands head and shoulders over anything they have done in the past, therefore those who lightheartedly jump to the conclusion that the return-to-the-raw formula is pretentious, aiming to lure long-term fans back to the fold, personally I distinguish a remarkable maturity in this material and a beautiful balance which might be more fragile than in the past.

Alcest express themselves in their mother tongue (save a couple of tunes sang in English) in this release, as in the previous ones, something that should not deter the listener since it really adds-up beneficially to the outcome, functioning clearly as an extra instrument that adds colours, thanks to its inherent musicality. A track-by-track analysis is out of the question for such a cohesive listen. It flaws like water, right from the starter, the title-track epic Kodama, till the monumental instrumental epilogue Onyx of the normal version or even the bonus track of the hardcover book edition Notre Sang Et Nos Pensées.

Aesthetically Kodama is delightful, pretty much like all of their previous works, since images play an important role in their music. Through this dark and bittersweet narrative, Alcest gave us a musical structure bristling with beauty, progressive feeling and incomparable freshness. Is this their best work so far? I can’t tell, but undoubtedly it is their most mature and rightfully establishes them to the musical elite.

Alcest’s composition style, simply described as “black-gaze”, is proof of their relentless endeavor in creating a piece of musical art that succeeds both in telling a story and delivering a black metal experience. The massive guitar riffing is that of typical post-rock and shoegaze style, composing mid-tempo ballads with progressive touches and in conjunction with the variability on the drums and the vocals, the result is an introversive album.

The album’s taste depends on the listener’s appetite and perception to digest and visualize the balance between the spiritual and the mysterious elements that profusely Kodama gives. It’s a narrative experience full of dark and melancholic soundscapes, exploring atmospheric metal in a coherent album where everything is aligned and should be listened as a whole.

Alcest will continue to intrigue us in an upward rate, with their unique bittersweet artistic music.