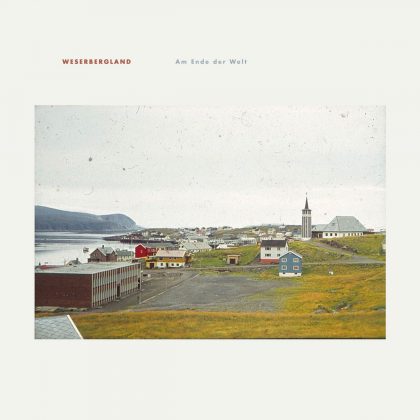 The adventurous expressive vehicle of Weserbergland first revealed its beneficial properties in 2017, through an enjoyable album with the very informative title Sehr Kosmisch, Ganz Progisch, which translates to “Very Cosmic, All Proggy” (our reviews here). Indeed, it was a meeting of the wider kosmische musik / kraut spirit with an extremely progressive logic in the orchestrations, with references starting from late ’60s, psychedelia and progressive rock, to reach its transformation nowadays, e.g. post-rock.

Behind the wheel of this project is the Norwegian Ketil Vestrum Einarsen, who specializes in flute, and is known as a member of White Willow, Kaukasus, Geir Lysne Listening Ensemble, previously Jaga Jazzist, but also through his guest appearances in Motorpsycho, Wobbler and Pixie Ninja.

In the enjoyable Sehr Kosmisch, Ganz Progisch, Einarsen had the great, as it turned out, support of other important Scandinavian musicians, such as drummer Mattias Olsson (White Willow, Pixie Ninja, ex Änglagveård), guitarist Gaute Storsve (Sleepyard) and bassist Jacob Holm-Lupo (White Willow). In the guest list we will find, among others, members of Jaga Jazzist.

With a renewed batch of participants, Einarsen enters the new decade by showing off a completely fresh sound on the second Weserbegland album.

Einarsen returns with a thriving and fragrant bouquet of sounds amidst this discouraging current situation of the pandemic. However, how auspicious and reassuring can it be to hear something entitled Am Ende der Welt, which translates to “At the end of the world”?

Although it sounds a bit pompous and bigoted, it always impresses us as a fact, the conclusion that truly great art can be analgesic or even euphoric in difficult times, both for the creator and for the audience. Thus, it is explained how in the unique, self-titled composition of the album that is divided into two parts (digitally there is also a one-part format), Einarsen and his companions build an imaginary dystopia, ending not to overwhelm you, but to spread emotions of mental exaltation and rejoicing inside you.

The Norwegian is now launching his inspirations by turning towards an avant-garde logic, aspects of which we also encountered in his favorite kraut mentality, leaving behind the motorik rhythmic approach of the previous album and the transparent compositions with intelligible development. Einarsen, uses computer dynamics and builds moment by moment through layers of sounds he ecstatically commands, which emerge from his flute but also from the instruments of Gaute Storsve (prepared guitar), Jan Terje Augestad (prepared piano), Maria Grigoryeva (violin, contributing to works by Philippe Petit, etc.), Jørgen Mathisen (saxophone, member of Krokofant), and Molesome (Mattias Olsson).

The paths they all walk upon no longer sound like layers of memorable built-up melodies. These now come and go in the form of anxious evolution along with buzzes and shattered rhythms, in a setting that sounds truly natural despite the extensive electronic processing of its frequencies. What we receive is intertwined with minimalism, it’s simple and at the same time sensually rich. Jacob Holm-Lupo’s mastering allows each individual sound to unfold its own voice.

The entire 42 minutes of Am Ende der Welt are marked by a lyrical evocation, burbling and courageous, even if you don’t need to raise the volume in each subsequent turn, implying much more than what is heard. The sounds are patiently woven like threads bearing elements from classical chamber music of the last two decades, the post-’90s electronica interventions, a style close to that of Denovali record label, as they are intertwined with noisy patterns that evoke memories of the electro-acoustic side, the improvised and on-the-spot musique concrète practices, as well as others related to the freedom in the work of Conrad Schnitzler and many of his followers.

The album sounds like an urgent pulse, single and indivisible, like a drone symphony in which many messages with the same purpose are beautifully crammed. The expressive potential of all the musicians and the vision that unfolds fascinatingly here, seem to have an engaging plot for our ears and minds, giving birth to more and more images. Images of disharmony, from a world that is collapsing wonderfully…

Although they were formed to study the krautrock of the 70s, Weserbergland in their first album avoided a sterile academic approach to the genre, focusing on the general evolution of experimental music to the present day. In this sense, the stylistic turn of the project with Am Ende Der Welt seems quite logical. This time Ketil Vestrum Einarsen seems to be taking a step back in his approach, observing minimalism and the experimental forms of krautrock from a distance, adding elements from the minimalistic music from the 60s onwards. The album’s 42 minutes act as a journey of sounds, characterized by the absence of ‘proper’ melody. Most of these sounds are played by instruments, an element which adds an extra depth to the listening experience. The sound manipulation is excellent and the flow is very good, while the special rhythmic approach is one of the main features of the album. Without ceasing to be an album of “special situations”, Am Ende Der Welt manages to be very enjoyable in its uniqueness, at least for listeners of “special situations” who succumb to the journey it promises.

Ketil Vestrum Einarsen (Weserbergland): “musicians can’t operate in only one genre to survive, and that’s a very healthy thing”