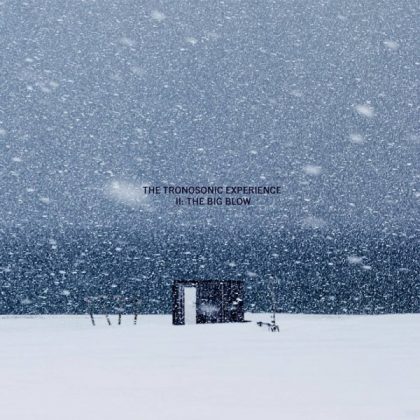 Two years ago, the self-titled debut of Tronosonic Experience (our reviews here) introduced us to another jazz/prog band from Norway, a country that never stops to bombard us with exceptional releases from that music genre. The second album of the band with Per Harald Ottesen (Bass), Ole Jørgen Bardal (saxophone),  Øyvind Nypan (guitar) and Jango Nilsen (drums – the only lineup change) was released by Apollon Records (its prog offshoot to be exact) that seems to be growing quite fast with smart moves and dedication, especially in the underground area.

According to the record company’s release note, the style of the band remains unchanged. Drawing their inspiration from avant-garde jazz of the 60s and progressive rock bands of the 70s, Tronosonic Experience still evolve their sonic mix of punk-jazz and instrumental rock that they presented in their first album.

How to surprise by being predictable

The truth is that after a lot of continuous listens I realized that the labels’ release note is surprisingly true (especially if we compare it with the numerous fairytale release notes we read everyday). This makes the result a bit safe, but how far can a band go by aiming to achieve exactly the same sound, especially when we talk about instrumental music? The answer isn’t easily revealed, but only after the aforementioned consecutive listens (and some more maybe).

However, before we go to the coveted answer, it is important to state some details. II: The Big Blow was recorder live at the Ocean Sound Recordings that are located in Giske, a secluded island with total are of just 2.67 sq.km in west Norway (here to be exact), with Henning Svoren being the sound engineer and producer (among others, he has also worked with Sonar, Hedvig Mollestad Trio, a-ha). The composition of the songs belongs mostly to the bassist Per Harald Ottesen (the two quieter tracks of the album where written by guitarist Øyvind Nypan) and the final formulation emerged by jamming of all four musicians. The creation of the album began during a trip the four members had in the Arctic in the winter of 2018 and they all state that it had a great impact in the music of II: The Big Blow. This of course is evident by the use of external sounds in several points of the album and of course the pretty arctic album cover. All these may sound surprising and interesting, especially when someone realizes their impact in the music coming out of the speakers.

The main advantage of a good instrumental album is the flow. In this case, it is very successful and pretty exciting. The dynamic parts of the album follow some kind of “the calm before the storm” and they strategically make an immediate impression. More about the essence though, II: The Big Blow isn’t just a smartly well done album, it’s a truly very good record with songs that have stick to mind and as a whole it invites you to listen to it again and again. The magnificent energetic opener The Big Blow offers one of the most enjoyable starts in a record I’ve enjoyed in years, form the “cripple”, deconstructed guitar phrases of Nypan to the full blown jazz-prog that follows with Bardal’s saxophone taking center stage. Here, we understand how Nilsen’s presence elevated the rhythm section of the band. As Coup De Grace starts (the main phrase here is excellent) it is evident that no matter how well everything is performed, the live essence of the songs has been captured perfectly by Svoren giving a great sense of immediacy. The suspicion that was formed in the start of the album is confirmed later: the hopeful debut has been surpassed both qualitatively and artistically. The peak comes at Voyager Pt.1 that starts with a faint baseline by Ottesen. The build up that follows reveals us probably the best song the band has written so far, with the edgy phrase of Nypan and the free form jazz outbursts summarizing perfectly the “avant-garde jazz meets King Crimson” aim of Tronosonic Experience. The purely ambient Voyager Pt.2 sends us completely uprpared to the heavy sounds of Rasputin and respectively the “arctic” Maelstrom (slight return) to Iron Camel (another excellent basic melody here), where Bardal and Nilsen sound brilliant. The more typical Jazz-prog 50 Let Pobedy gives way to the fantastically melancholic Lost Highway that closes the album perfectly and it’s probably the only unexpected element in the album.

Coming back to the initial question, the pleasant finding of surprise in a specified and predictable sound mix is another reason to bow down to the modern Norwegian prog scene. With II: The Big Blow, Tronosonic Experience escape the boundaries of a good band that follows the towline of a successful scene and their mark is now apparent. Given that their melodies have given me countless personal listening hours and kept me company during even more hours of lonely driving, I will be eagerly awaiting for their third album, hoping for the “biggest blow”.

The band keeps its instrumental character, walking in jazz-rock paths. The album seems to be a result of an improvised procedure, with the Scandinavian approach being diffused throughout the atmosphere. The music references that were there in the first album make their presence once more (Elephant9, Møster!, Hedvig Mollestad Trio), alongside with the direct references to King Crimson and classic Jazz. The groove of their first album has decreased in some level, resulting in a bigger emphasis of the technocratic and the beautiful grandeur of the genre.

However, in the realm of improvisation, Voyager Pt.1 stands out with the first half having a minimal ambient approach and a beautiful guitar solo working as a bridge for the sound outburst that follows. An interesting experiment from the side of the Norwegians and my personal favorite. Lost Highway closes the album, and moves in atmospheric boundaries, without technical outburst and it is offered as a dessert at the end of a very good album as a whole.