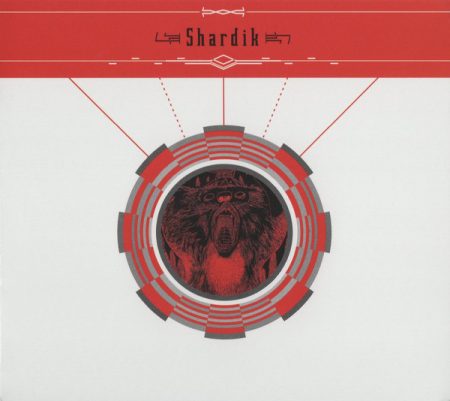 Matt Hollenberg is one of the most active and interesting avant-prog / metal guitar players today. Known by Cleric and Cetus, and especially by John Zorn’s Simulacrum, where alongside John Medeski and Kenny Grohowski they have given us great albums such as Simulacrum and The Painted Bird. A few months ago we had written about the Sarattma project, which surprised us positively with Inner Spaces, as well as the John Frum debut album.

This time, Hollenberg returns with Shardik after working on the composition of the self-titled debut for more than a year. Here he collaborates with two old bandmates of his: Matt Buckley (drums, percussion) of Cetus and Nick Schellenberger (bass, synths) of Cleric. Shardik themselves describe their music as a dynamic mix of avant-garde classical, free jazz, dissonant math metal, ambient and world music.

The debut of Shardik was a delightful challenge way before I listened to it for the first time. Till this day, Matt Hollenberg’s career includes only unpredictable, bold, anything but commercial choices, with productive experimentation as the sole criterion of artistic direction, as he and his bandmates decide. After the first and the many dozen hearings that followed it, the verification was not surprising, but the quality of the album surpassed every personal expectation.

From the first second of It Is What It Isn’t until the closing of La douleur exquise it is unmistakably clear that Shardik is an aggressive avant-prog album, with metal, jazz, ambient and world elements enriching the sound of the trio, and ultimately forming a fascinating story without words. The narrative spirit of Hollenberg’s music is certainly not a surprise; it is just that here he has the absolute leading role, so his compositional and guitar skills are in full display. The chemistry with Buckley and Schellenberger is perfect as expected, and both musicians contribute considerably, given the heavily math-centric nature of the tracks and their ever changing rhythms. Especially Buckley’s percussions enrich the result, acting as an oriental spice in the recipe, while Schellenberger’s synths reduce further the sonic pH, making Hollenberg’s melodies sound even more charmingly mysterious.

It is extremely difficult to pick highlights here. As distinct as they may be, the compositions are equally equivocal and form a continuum of a coherent whole. It Is What It Isn’t, Past Lives, The Great Attractor and La douleur exquise may stand out just a bit, as well as and the most extreme piece here, Vorga T: 1339, which is sprinkled by Zorn’s spirit (after writing this I already think the splendid Inner Dimensions, Faustian Bargain and No Arrival are misjudged). If there is a disadvantage in this album, this is no more than its rough character, which may surprise some, but the truth is that it is not addressed to the average progster or metalhead. There are no hooks here, not even a single catchy riff, a melody to whistle… nothing of that sort. Fair enough -someone would say- though I suspect that at some later hearing this music could impress even an ‘outsider’.

The similarities with the composer’s past are there, fortunately. The psychedelic nature of his dissonant playing, the sharp metal riffs, the math temperament, the jazz appeal and the dominant avant-garde character are reminiscent of his past performances, but beyond instant déjà vu, Shardik is a field of exclusively pleasant surprises. And of course, that is because Hollenberg is an all around and very bold guitarist. With zero show off, he drives the sound of his guitar to the edge, eventually achieving a magnificent flow of thick, melodious and noisy sound, without hiding at any point. And this is not a figure of speech, but rather the essence of the expression of a hyper-talented musician who deserves to be known by all lovers of this kind of music (at least). Listening to the debut of Shardik, the last impression was how wild Hollenberg’s playing is and how rare it is today in rock and metal in general… How this genuine expressive explosiveness has disappeared behind post-rock / metal conventions, prog self-discipline, metal stereotypes, repented tattoos and unnecessary sound effects… How easily everyone gets an alibi and how funny they all seem when you listen to what this guy does.

Matt Hollenberg has – I reckon – reached the transhuman, transcendental composition he admires in John Zorn. Shardik adheres to the teachings of acts like Painkiller or Naked City, combined with the recent tendencies of Zorn’s Simulacrum. The latter is where I first heard Matt’s extraordinary guitar playing. Consistent with these, the album alternates from ultra heavy frenetic math-rock grooves to ambient soundscapes to middle-eastern-fused melodic patterns and lab-fueled dissonance. Assisted by Matt Buckley and Nick Schellenberger on drums / percussion and bass / synths respectively, Matt Hollenberg in creating a dystopian world of organized chaos with an organic trio as his interpreter of choice. The compositions are engaging, although they may take some time to get used to and I absolutely love the calculated and at-times-frippian guitar work. Matt is a guitar beast of his own and along with his musical companions they redefine the role of the power trio in 2017.