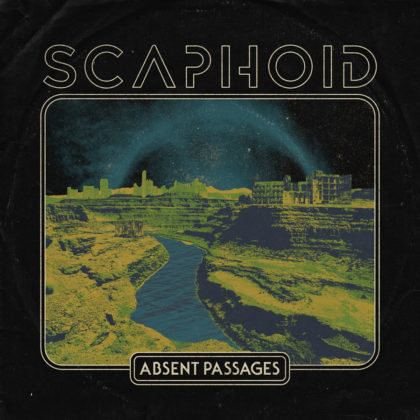 Scaphoid is a one-man band from Austin, Texas, and essentially it’s the musical vehicle of multi-instrumentalist Matt Hobart, who, of course, writes all the music. Four years ago he released his first, quite interesting EP, entitled Dies Mercurii. Absent Passages is Scaphoid’s first full-length album and according to the description on their bandcamp page, it sounds like a mix of several genres, such as prog rock, post-metal, post-rock, space rock, psychedelia, and djent. Thus, the question is: was Hobart able to tame all these influences and sounds on a record with coherence and good compositions?

Progressive post-rock from the depths of the internet underground

The number of one-man bands in modern progressive rock is increasing more and more, especially since music has been available online. Obviously, technology has now reached a level where even the most demanding genres, with complex instrumentations and demanding productions can be recorded much more easily, even by a single person. The results vary. Several of these albums are lost because of amateurism or an overly childish progressive fanaticism. In the case of Matt Hobart and Scaphoid, fortunately none of the above is true. There is almost no hint that suggests the existence of a single musician. Absent Passages flows effortlessly in the 55 minutes it lasts and has the ability to invite the listener to play it again and again.

The harmony with which Hobart’s musical vision is built makes it difficult to categorize the album. It is not clear whether this is progressive rock with a post-rock element or vice versa. In general, post-rock exists as a compositional pattern, and fortunately not as a general style, adding to the soundtrack narrative of the album. The progressive rock influence comes mainly from the line that connects Floyd with Porcupine Tree (with a bit of Opeth), so this is how the low-key psychedelic feeling is justified in several parts. Also in a very clever way, the djent rhythmic patterns are sewn on the development of the compositions, with the metal dosage at low levels. The tracks themselves have the aforementioned excellent flow, but also the ideas that make them memorable. Many of the themes have a strong compositional weight, and although in some places there are some more predictable ones, they keep the listener until the end.

Apart from being a very good composer, Hobart is also an excellent guitarist. His style is very melodic and Gilmour-ish, without, however, lacking a more modern touch. The guitar is definitely the voice and the personality carrier of the album, but apart from that all the instruments are played to perfection. Special mention must be made of rhythmic patterns. Most of the drums has been programmed, but it’s still very inspiring. Finally, the mixing and production of Jamie King is very good for such an underground release and most importantly, it helps a lot in the clarity of the sound.

Absent Passages fulfills what its creator promises and although in some places the influences are too obvious, it manages to stand as a homogeneous album. Moments like the outro of Celestial Ego make it clear that Matt Hobart is a very good composer, and a great connoisseur of the genres he deals with. If these moments are multiplied in the future, Scaphoid will have the chances to be upgraded from a promising act to an acclaimed band.

The magical composition that opens this instrumental album manages to invite the listener in a dreamy and nostalgic mood, where continuous melodic guitar solos and technical parts of modern prog / post-rock / metal unfold. The next two tracks continue in the same style and before the listener asks for something different, Scaphoid cleverly drop the rhythm for the next three compositions. Here, prog technique and guitar solos at reduced speed will be maintained, but the post-rock atmosphere prevails. The last two tracks restore the original mood with even more intensity, while the 14-minute Infrastricken leans towards prog metal.

Absent Passages is dominated by Matt Hobart’s guitar, but at key points there are the necessary keyboard melodies and heavy bass. The only downside seems to be the dry and plastic sound of the drums (I do not know if the sound is natural). Even so, the album is a very good example of a perfect combination of post-rock and prog.