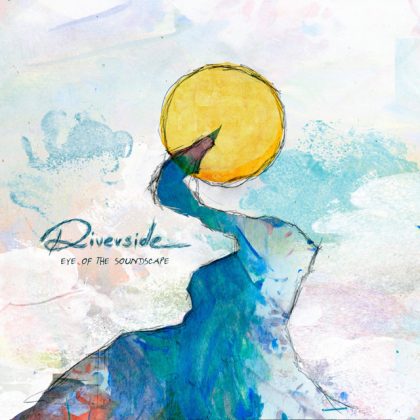 Eye of the Soundscape is not just the seventh studio album of Riverside. It is the last one that includes work by the late Piotr Grudziński and is also the one that closes the chapter of the band as a quartet. It makes sense that this release is dedicated to the memory of the great guitarist and its mood is inevitably affected by the first forced change in the line-up. What matters most is the musical direction that Riverside will take in the future as a trio and to what extend “Eye of the Soundscape” could be considered as its precursor.

The river is not the same

After Piotr Grudziński’s untimely death, not only could no one tell for sure if the present work of Riverside would be ever out, but also the very future of the band itself was in question. The answer is in our hands and as regards the future of the band, things are pretty clear, too.

What have we got here then? A double CD (the copies of the 3LP are already sold out!) that runs a shade over 100 minutes, where we find new and not-so-new material, let us not forget that the present release functions (also) as a transitional period and buys them time for the new musical direction that the, now, trio is about to follow. We find all of the bonus material from Shrine of New Generation Slaves (Night Sessions) and Love, Fear and the Time Machine (Day sessions), plus Rapid Eye Movement and Rainbow Trip remixed to fit in the feeling of this record, while the Riverside signature is lurking. Regarding new material, there are four compositions Where The River Flows, Shine, Sleepwalkers and the title-track. When the CD starts spinning, it becomes obvious that the title alone gives a fair impression what the listener is about to experience, who is about to find themselves in the “eye of the soundscape” (if I get it right). What kind of soundscapes? Let us forget more or less what we already know about the Riverside’s past, because here we have to deal mainly with electro/ambient music with the prog and rock elements pushed to the background. My view is, if you think of Tangerine Dream or Klaus Schulze (or even Lunatic Soul, something that makes me wonder “why two bands?”) coupled with the groove of early Porcupine Tree, you are fair close to what you are about to hear in most of the songs.

Based on the above, we could summarize as this: if all of these things strike a chord with you, listen to it by all means. If you are a fan of adventure or you have been expecting something like their previous releases (Love, Fear and the Time Machine excluded), be forewarned. Personally I belong to the second group. After the initial inquiring listens and once I familiarized myself somewhat with the sound, it didn’t “bother” me that much, yet I didn’t listen to anything to keep my interest alive. Some interesting parts here and there but nothing more. No matter how I tried to focus, my interest kept wandering off. Nothing bad, but nothing breathtaking, with Where the River Flows, Night session, Rapid Eye Movement (2016 mix), Heavenland sounding somewhat better to my ears. It all boils down, probably, to the listener’s likes and perhaps their mood (night hours are strongly suggested).

More important is that this release had been always a burning ambition (from what I gather) for the band and moreover buys them time to alleviate the wounds, if possible.

Riverside take a chance to experiment, since their latest work is quite different to all their previous ones and this could not be exciting to their fans, even though it is still true to the band’s core sound. The ambient element dominates the new and the old material and the fact that they can pull off such a style showcases their talent and musical education. This release’s singularity lies also in the fact that this is the last record that Piotr Grudziński performed and therefore it is of great value. For good reason then this album is dedicated to him and one thing is certain, this instrumental journey will not go unnoticed by anyone. A long chapter has now ended and their latest release honours them, since above all it reflects the consistency, love and dedication that define them.

Riverside have announced the guitarist for their live shows