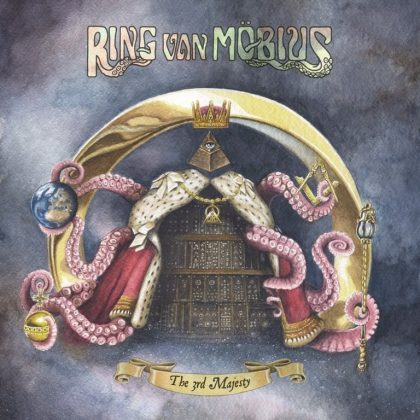 Apart from the main – and usually large – Scandinavian cities that often and in various ways give us great bands and wonderful music, there are also smaller centers of sonic surprises, such as Norway’s Karmøy, from which Ring Van Möbius come from. It’s a progressive rock trio with a retro approach, which does not include guitar in the orchestration, with the various ’60s and’ 70s analog keys at the forefront, at least in the melodic parts.

Their first release was the single When the Sea and the Universe Were at One (Or; The Introduction Of The Octopus On Tellus) before their debut LP Past the Evening Sun. Their second full-length album, The 3rd Majesty, has just been released.

Retro frenzy with a fascinating twist

Ring Van Möbius’s second LP, has all of its plots on the symphonic bank of progressive rock, with the analog keys on the starring role, and the distance between the early ’70s and 2020 seeming vague.

The instrumentation, the vocal processions, the production, the structural composition and the thematic focus of the whole prove that the parameter of time deceives us. It’s as if all this comes from the period 1970-1972, when the diverse prog wave (mainly) from England and Italy reigned. Of course, at times, the production and the mastering have a modern air, while the cover reminds us of great artworks of that era, but the shades, the shapes, the linearity, and the font also have a post-70s touch.

With a retro approach, but with a tendency not only to work based on its influences, but to lay its own composition and general aesthetic trajectory, the Norwegian trio builds these unoque four songs with consecutive slaloms between the sound motifs. In their elegiac, haunting atmosphere, the parts of the album act like nostalgic, thrilling postcards that you dare say were detached from the pages of a Lovecraft book or that they include shady figures with Geiger’s grotesque signature.

The opening The Seven Moments of the Third Majesty has a special place in the flow of the album, an epic with riveting development into a seven-act adventure, in the tradition of the ambitious conceptions of the prog genre. The second best track is the explosive The Möbius Ring, with its wonderful alternations between paroxysmal developments and calm clearings. In any case, the group’s ability to weave complex escalations that maintain their accuracy throughout their duration is a key reason to invest in their inspirations.

We will agree here that images such as those of Emerson Lake & Palmer, Van der Graaf Generator and Metamorfosi, and even Egg and Arzachel are infiltrated while listening to the album, but in the end the result does not need to be redefined to touch you. From start to finish, Ring Van Möbius generously and eclectically formed flexible and genuinely melodic music, making ecstatic use of vocals, hammond, Fender Rhodes, massive synthesizers, theremins, strings, various percussion instruments, and bass.

The second full-length album of this symphonic power trio is another remarkable musical experience from Norway. From their debut, they had given us the credentials of a very strong retro-prog band and with this one they strengthen this characterization.

The trio keeps the same basic core with keys, bass, and drums, and the new album includes four songs. The first one is The Seven Movements of the Third Majesty which consists of seven sections and is the lion’s share lasting over twenty minutes. Organ, piano, mellotron and all other keys dominate everywhere. It’s a feast with many and intense changes. Strong bass lines and endless energy on the keys are their strengths, and they offer them in abundance. The somewhat theatrical vocals with a strong Hammill element fit in this symphonic orgasm and the 70s element of the great bands of the golden age of prog. The other three tracks lasting from five to eleven minutes continue in this pattern, releasing all this energy in flawless performances.

A necessary addition to the collection of all those who love the classic prog sound.